I ENJOY ENTERING CHARITY SHOPS (shops selling used goods to raise money for good causes) to browse the books they have on sale. Even if I do not find anything of interest or buy anything, I find these visits both satisfying and therapeutic. Yesterday, to satisfy my craving for the browsing experience, I stepped into a local charity shop which I have entered many times before,  often with only a day or two’s interval between visits: usually finding that the stock of books has barely changed, and not expecting to find anything worth purchasing. This time, my gaze fell on a large old book on a shelf. What caught my eye was the title on its wide spine: “Gazetteer of India”. Because I have a great interest in India, I always look at books about the country and this was no exception.

The book has 1015 pages of text printed in a tiny font. Eagerly, I looked for its date of publication and to my great delight I discovered that it was published in 1857. For those who are not familiar with it, this is the year when the so-called ‘Indian Mutiny’, or, as it is known nowadays, the ‘First War of Independence’, began on the 10th of May. The book’s full title “A Gazetteer of the Territories Under the Government of the East-India Company and of the Native States on the Continent of India” was soon to become out of date because following the ending of the ‘Mutiny’ in 1858, the British Government took over the ruling of India from the East India Company.

The book by Edward Thornton (Esq.) was published in response to the desire of the General Courts of the East-India Company to have  “… an authentic Gazetteer of India [that] should be offered to the British public in a cheap and convenient form…”. Thornton had already published a four volume “Gazetteer of India” in 1854. The book I found yesterday contains much of the information that was published in the multi-volume edition. The book that I purchased is an original edition, which is rarely offered for sale in the second-hand book market. A facsimile edition was published by the British Library in the 21st century. Fortunately for me, whoever had priced my copy had no idea of its true worth, which is unusual because often those who run charity shops often check the market prices of old books.

Edward Thornton (1799-1875), the author of the gazetteers is, apparently, often confused with the better-known Edward Parry Thornton (1811-1893), who was an administrator in India where he lived on and off between 1830 and 1862. ‘Our’ Edward of the gazetteers worked at East India House (which stood in London where today the towering Lloyds building now stands) between 1814 and 1857, where he was head of its Maritime Department from 1847. The Oxford Dictionary of National Biography includes this information about him:

“Among his publications were gazetteers of the territories held by the East India Company and the ‘countries adjacent to India on the North-West’, and a six-volume History of the British Empire in India (1841–5). He was also responsible for entries in the eighth edition of the Encyclopaedia Britannica on Indian subjects, which have also been attributed to Edward Parry Thornton. This Edward Thornton died at 1 Montpelier Street, Brighton, on 24 December 1875.”

You can rest assured that I will not be reading all 1015 pages of my new ‘treasure’, but I will enjoy dipping into it to read about places I have visited or hope to visit in the future. One of the first places I looked up was Tranquebar in Tamil Nadu, which we visited in February 2020. Formerly, it had been a Danish colony in India. Thornton wrote:

“ … The settlement of Tranquebar was ceded to the British government in 1845 by the King of Denmark, for a pecuniary consideration … the superiority of the British over Danish administration is attested by the growing prosperity of the district, and the large increase in the amount of the government revenue…”

This “government revenue” did not benefit the British in general but rather the coffers of the East India Company.

Of Bangalore, which I have visited more than 50 times in the last 26 years, Thornton wrote a whole page that includes the following:

“… The town is tolerably well built, has a good bazaar, and is inclosed [sic] by a wall, a ditch, and a broad fence of thorns and bamboos…”

Thanks to my friend, an excellent guide to Bangalore, Mansoor Ali, I knew of the existence of the fence (hedge) of vegetation mentioned in the quote but did not realise it was still in existence as late as 1854/7. This hedge is marked on some maps of Bangalore created during the 19th century. According to a map dated 1800, the circular hedge surrounding Bangalore ran through present day Yeshvantpur in the north. Kengery in the west, and almost at Madiwala in the south east. I have no idea when the hedge disappeared, but it was clearly after the time when Thornton knew of its existence. I look forward to much more delving in my latest literary acquisition.

Finally, my copy of Thornton’s book has an ex-libris sticker that bears a coat-of-arms and the name ‘John Harrison’. Harrison is a common family surname. A quick look at Harrison coats-of-arms displayed on Google reveals that the crest in my book is similar but not identical to that of the “Yorkshire Arms” of the ‘James River Harrisons’, which originated in the north of England. They settled on the James River in Virginia in the 1630s. If my book was once owned by a member of that family, I wonder how it ended up on a shelf in a charity shop in West London.

MY LOVE OF MAPS started soon after I was able to read. I was given a book that fascinated me for many years. It was called “The Map that came to Life” by HJ Deverson and R Lampitt. First published in 1948, it follows a couple of children walking through the countryside with their dog, guiding themselves with an Ordinance Survey map. On each page, there is a bit of their map and an illustration showing the terrain which is on that portion of the map. Not only did it teach me something about map reading but it helped me to visualise in three dimensions what is being represented in two dimensions on a map. It was one of my favourite books during my childhood. 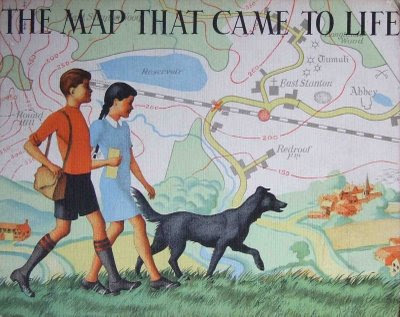 From the age of eight years onwards until I was thirteen, I attended the Hall School, which is near to Swiss Cottage (in northwest London). Although there was a lot that I did not like about this academically top-rate establishment, I am grateful for at least one thing. One day when we were learning about Ordinance Survey maps in a geography class, our teacher gave us an exercise that stimulated a hobby that lasted until my late teens. The exercise was to draw an Ordinance Survey map of an imaginary place making correct use of the various symbols that appear on the real maps. Of all the academic tasks I was required to perform at the Hall School, this was the best.

Inadvertently, our geography teacher had sparked off a new craze for me. That was drawing maps of imaginary places. I was inspired not only to emulate Ordinance Survey maps but also to create maps of imaginary places in the styles of the ever-increasing number of maps that I had begun acquiring as a passionate map collector. I drew these maps using pencils, water-colour paints, biros, and fine-tipped Rotring pens (such as are used by architects and technical draftsmen).  Drawing maps occupied much of my precious spare time, time which my friends spent socialising and meeting members of the opposite sex.

After a while, I began drawing maps of an imaginary country, a socialist republic behind the so-called ‘Iron Curtain’. In addition to creating maps of my geographic invention, I produced illustrations, tourist brochures, and so on. Be patient because  I shall say much more about this imagine land in future postings.

When I began studying at university in 1970, my map drawing activities ended. However, my fascination with maps has never diminished. While sorting things at home, I have found the maps and drawings I made during my teenage years. Gradually, I will share some of these with you, dear readers.

I began this piece with a mention of a book that described a map that came to life. It was first published before I was born. Today, the authors’ concept has almost become reality with Google Maps. This useful service provides fairly detailed maps, which at the click of a ‘button’ become aerial views of the area that has been mapped out. At the click of another button, you can travel (virtually) along the streets on the maps and see the buildings and other things along them. While the maps do not really come to life, the Google mapping service has brought us closer to that happening for real. Let us wait and see what the future brings in the way of remote realisation of life in places on the map. 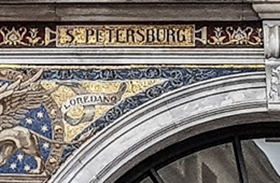 An old mosaic adorns the facade of the big Apple store on London’s Regent Street. It harks back to the time long ago when the building housing the store was a London Branch of a big insurance company. The mosaic was assembled and installed long before the great Russian Revolution of 1917. Various cities are named on the mosaic. One of these is St Petersburg. After the revolution , St Petersburg was renamed ‘Petrograd’ and then ‘Leningrad’, which remaine dits name until the 1990s when the city reverted to being ‘St Petersburg’. During my childhood and early adulthood, St Petersburg was ‘Leningrad’. Whenever I passed that mosaic, I used to marvel that the city’s old name remained unchanged on the facade of the building. It was a memory of historic times. Now, by chance, it is up to date.

Many of the readers of this blog will have realised that I visit India regularly. Most people know that Bombay is now known as ‘Mumbai’. Actually, speakers of Marathi and Gujarati have always called it that, but often still call it Bombay when speaking in English.

Madras has become Chennai. So what should one ask for when ordering Chicken Madras, which appears on many menus in Britain’s Indian restaurants?

In Karnataka, Bangalore has become Bengaluru, Mysore is now Mysuru, and Halebid is Halebidu. When I bought a bus ticket to Gulbarga in northern Karnataka, I was puzzled to see I had been issued with a ticket to Kalaburgi. This turns out to be the new name for Gulbarga.

Allahabad is now Prayagraj, a name that removes the Islamic flavour of its former name. There are moves afoot to de-islmamicise the name of Ahmedabad in Gujarat. The proposed name for the city founded by Ahmed is ‘Karnavati’, but the change has not yet been enforced.

Whether these changes of Indian place names will stick remains to be seen. Who can say whether they will revert like Leningrad that became St Petersburg again? 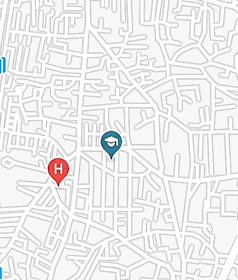 Without gee-pee-ess or a map,

What would you do

If you lost your way?