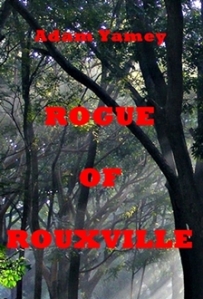 ROGUE OF ROUXVILLE by Adam Yamey is available at:

When Jakob entered the crowded court room some days later, he saw Constable Röttcher leaning against the dock in which two natives, who looked no more than fifteen and as alike as twins, were standing. These were his clients. It was the first time he had set eyes on them, not having been permitted to speak with them before the trial. They looked nervous; one of them was shivering. Jakob turned to survey the people crowded into the court, and could not see a single a native face amongst them.

Everyone was chatting noisily, waiting for the trial to begin. Court cases were always well attended in Rouxville, because they provided the sole public diversion in a town which possessed neither a theatre nor any other place of public amusement.

Lodewijk Brandhorst was sitting in the front row opposite the judge’s dais. He was smartly dressed in a tweed jacket with matching waistcoat. Simon, his son, sat next to him. Jakob stared disdainfully at the young man’s freckled face.

Constable Liphaphan entered, strode up to the dais, raised the magistrate’s gavel before striking it three times on the desk, and then bellowed:

“All stand for the magistrate.”

The room became silent. Schnehage, the town’s magistrate and Chief Prosecutor, entered the room from a side entrance. He was followed by two clerks wearing black robes with white collars.

“Everyone may sit except the accused,” Liphaphan shouted.

Jakob noticed that the two lads in the dock could barely stand still, they were shivering so much.

“Begin, Mr Du Plooy,” Schnehage addressed one of the clerks sitting at a desk just in front of him.

The clerk stood up, and began reading from a sheet of paper which he held at arms length because of his uncorrected long-sightedness:

“On the afternoon of the 14th of June this year of 1875, April and Adonis, the accused, were seen fleeing from a field owned by Mr Lodewijk Brandhorst, the plaintiff. His flock of Merino sheep were grazing there. Shortly after their departure, Simon, Mr Brandhorst’s son, arrived at the aforementioned field, and discovered that three of his father’s animals, all of which had been perfectly healthy earlier in the day, were limping badly. Further, after counting the animals in the said field, he found that nine of them had gone missing, having – it is alleged – escaped through a gap in the field’s damaged enclosing fence. The accused, who are not employed by Brandhorst, had no reason to be in the field. They are therefore charged with: trespass; violence against animals; and damage to private property.”

The magistrate looked sternly at the accused for a few seconds, before asking them:

“Do either of you have anything to say?”

“We never was in that field, sir,” Adonis replied in broken Dutch.

The elder Brandhorst stood up, and coughed loudly.

“Yes, Mr Brandhorst,” Schnehage asked, “you have something to add?”

“Ag, those bleddy kaffirs are lying. You mustn’t believe them. My son saw them with his own eyes.”

Schnehage turned to the two natives in the dock. His expression was far from friendly.

April and Adonis stared at him uncomprehendingly. The court room was silent apart from the sound of wood creaking as people shifted about on uncomfortable chairs and benches. The magistrate drummed his fingers on his desk, and then asked the accused:

“Is Mr Brandhorst telling the truth? It would be best for you to be honest. You’ll get less of a punishment.”

The faces of the two lads had become greyed. Their wide-open eyes were fixed on the judge, pupils fully dilated.

Seeing his clients in this state angered Jakob. He stood up, and raised his hand.

“Yes, Mr Klein, have you something to say?” the magistrate asked.

“The complainant’s own son is the only person who claims to have witnessed the accused. I would like to know what time he discovered them.”

“Can you recall what time you discovered the accused in your father’s field?”

The young man squirmed in his seat, and began muttering.

“Stand when addressing the court, and speak up.” Schnehage ordered.

“Look, I don’t know exactly. It must have been… well, six, or maybe nearer seven o’clock.”

“Thank you, Master Brandhorst. Does that answer your question, Mr Klein?”

“Yes, your honour, it does. The exact time is immaterial. During the hours just mentioned by your only witness, and remember that he’s a member of the plaintiff’s family and therefore not unbi…”

“Yes, your honour. My point is that the light would have been failing rapidly even at the earliest time mentioned by Simon Brandhorst. It would have been almost, if not completely, dark. That would have made it difficult to accurately identify two figures, especially if they were as dark as the two boys standing there. It’s difficult to tell one black face from another isn’t it, Simon?”

The audience erupted into laughter. Schnehage banged his gavel.

“Have you finished yet, Mr Klein?”

“Almost, your honour: I doubt that young Brandhorst could swear – in all honesty, and with any certainty – that those two young lads standing in the dock are the two whom earlier he claimed to have been able to see so well – and for an instant in poor light – such a long time ago.”

Mr Brandhorst and his son looked menacingly at Jakob, who shrugged his shoulders, and then smiled at them. The magistrate turned to the defendants, and asked them:

“Can you remember where you were on the evening of the 14th June?”

The two youths in the dock looked at him blankly.

“Is there anyone in here who speaks their language?” the magistrate asked.

Jakob looked at Liphaphan, who was supposed to be well-versed in native languages. The constable pursed his lips, and turned his head away. Jakob realised that even if someone had been prepared to translate his questions and those of the judge, it was unlikely that his clients would have had any idea about calendars or dates. They were simple country boys, uneducated. Suddenly, Simon Brandhorst jumped up, and shouted:

“Ag, you see: the kaffirs won’t answer your questions. I saw them with my own eyes, honest to God.”

The Magistrate sat back, and fiddled with his gavel. Jakob had done a good job in mounting a defence, but this left the court in a difficult situation.  It was unlikely, he thought, that the real culprits would ever be found, and that the court might appear to be impotent if he were to decide that these lads were innocent.  With this in mind, he decided that it would do no harm to punish them, even if only to deter others from misbehaving in the future. Turning to face the two boys in the dock, he pronounced:

“April and Adonis, I find you guilty of the following charges: unlawful entry and malicious damage to private property.”

The court room became deathly silent, as he continued:

“In view of the losses incurred by Mr Brandhorst, I ought to fine you. However, I doubt that either of you will ever be able to pay. Therefore, I order that each of you receive fifteen lashes with the ‘cat’ on your bare backs. I hereby declare…”

Before Schnehage could finish, Jakob shot out of his chair, and shouted urgently:

“May I be permitted to speak on behalf of my clients?”

“With the greatest respect, your honour, I must protest that my clients have been found guilty on the flimsiest of evidence. I wish to lodge an appeal.”

Everyone looked at Jakob. Röttcher was amazed by his friend’s audacity. The two boys in the dock next to him continued shivering, completely unaware of what was happening and not comprehending anything. Schnehage remembered the long hours that Jakob had spent thumbing through the books in his office, interrupting him frequently to know the meaning of various Latin words and phrases, and began wishing that Jakob had taken his duty towards the accused less seriously. That would have made his job easier.  On the other hand, Jakob’s sense of fairness impressed him, and he felt ashamed that his own conduct had been influenced by the thought that Lodewijk Brandhorst, who served on the town council and had dined him on at least one occasion as a guest in his home, would not be pleased to see his son branded a liar in public. This case, which he had thought to be simple at the outset, was becoming complicated. He stood up, banged his gavel, and announced:

“In view of some … ahem … uncertainties in this case, I give leave for Mr Klein to lodge an appeal in the High Court in Bloemfontein. I hereby declare this trial over.”

Then, he passed a note to one of his clerks, who handed it to Jakob, who then read the words written on it: ‘Wait for me in my office.’

7 thoughts on “A TRYING TIME”