HELLO, I would like people to enjoy my latest book, “WALKING WEST LONDON”, without having to pay anything for it. Download it free of charge – no hidden conditions!

It is more important for me that this book should get read than it should make any profit.

Your constructive comments and criticisms will be welcome.

This is a book that can be used while exploring west London or to enjoy comfortably in an armchair. This is a travellers handbook, a history, and a collection of personal reflections.. Walk with Adam Yamey and discover new places and exciting experiences. 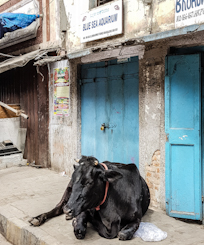 ALL I NEEDED WAS A POSTAGE STAMP. I could have walked around the corner to the post office in nearby Museum Road, but I chose to do otherwise. I found that there is a post office in Shivajinagar, a busy district in central Bangalore that contains many places of interest with ‘local colour’.

I asked directions to the post office from a couple of men standing in their tiny silver shops on the corner of Jewellery Street and Ebrahim Saheb Street. One of the men pointed in one direction and the other at the opposite. After some discussion, these kind gentlemen decided that I should head towards the large mosque at the top end of Commercial Street.

The Jumma Masjid stands at one end of Commercial Street on a traffic filled lane. A wider street lined with shops and market stalls leads from this centre of Muslim worship to St Mary’s Basilica whose tall spire dominates the skyline. The church and its grounds were exuberantly decorated with Christmas decorations. A portrait of Mother Teresa overlooks the busy courtyard in front of the church. A stall was selling gawdy decorations including a model of Father Christmas playing a brass coloured saxophone.

One side of the square outside of the church compound was lined with stalls selling decorative Christmas items, ranging from paper stars to models of Nativity cribs.

A building with indo-arabesque domes lines part of another side of the square. This is Russell Market, an indoor food bazaar. The picturesque building was built by the British in 1927.

Russell is not the only market in Shivajinagar. On my rambles today, I came across a couple of other food markets. These are not housed in buildings like the Russell Market, but in simple shacks. Years ago while wandering in Shivajinagar, I came across an open air bazaar specialising in spare parts for automobiles. I have not been able to find this chaotic jumble of motoring spares again, but I have been told it still exists.

HKP Road leads away from the Square that contains Russell Market. I had never been along this road before. The first thing that caught my eye was the covered Beef Market, which bears the date 1932. Near its entrance I saw butchers working on huge pieces of unrefrigerated beef. There is another beef market, which I have visited before, at Johnson Market at the south of the city centre.

Outside the Beef Market, there were numerous cages containing birds for sale as pets. Proceeding a few yards away from the Beef Market, I had to step aside to avoid bumping into a live cow occupying most of the pavement outside a shop called “Blue Sea Aquarium”. This was close to a shop specialising in repairing sewing machines, both electrical and pedal operated.

After crossing a canal, or maybe, judging by its smell, an open sewer, I spotted an old house with ornate shades over its windows. I photographed it.

The old house is opposite a tiny post office, which I entered. Three men were sitting behind the counter in a disordered office space. Eventually, one of them attended to me. After weighing my letter and scrutinising the address on its envelope, I was handed a 5 Rupee stamp. Using glue from a pot on the counter I affixed the stamp.

I had already handed over twenty Rupees, but received no change. When I had stuck on the stamp, I asked for my change. The post office employee who had sold me the stamp seemed surprised. One of his colleagues rummaged around in a drawer, and handed me ten Rupees. Neither I nor the post office had five Rupees to give the correct change. I felt it was worth losing 5 Rupees at this transaction because my journey to reach it had been far more interesting than had I walked to the post office nearest to where I was staying.

After leaving the post office, I began walking back along HKP Road. A motor scooter pulled up alongside me. It was being driven by a man. Behind him sat his child and his wife in full burqa. He said that he had seen me taking a picture of his old house. I told him that I am interested in the old buildings of Bangalore. He told me that his house was over 100 years old and that I should visit his clothing shop in Commercial Street.

Recently, I was walking along the South Bank close to London’s National Theatre when I saw two friends approaching each other. One said to the other:

“I am a tourist everyday.”

This got me thinking that I am also a tourist every day. Since I retired in September 2017, my time is more or less my own. However, I do not sit at home bemoaning the fact that I have no work to do. On the contrary, I love my freedom to do what I wish.

Almost every day, when not travelling abroad or to some other part of the UK, I visit somewhere in London. It may be local or more distant, it does not matter where. Wherever I go, I discover something new, something that either did not exist before because it is newly built or opened or something that has been around for ages, which I have never noticed before.

London is so rich in experiences and sights that even a person like me, who has lived there for over 60 years, can always find novelty when stepping out of the house. Every time I leave home, I enjoy and appreciate London. Every day, I become a tourist in my own city.