AN AGED BRICK WALL, clearly once the boundary of the grounds of a grand house, runs along part of The Ridgeway in London’s Mill Hill. It bears a plaque commemorating the fact that this was once the site of Ridgeway House, the home of Peter Collinson (1694-1768), author, naturalist, and botanist. This was not a name with which I was familiar, yet he played an important part in the scientific life of 18th century London and further afield.

Peter Collinson, born a Quaker, the son of the owner of a textile business, was unable to attend university in Britain because in his time members of that branch of Christianity were not admitted. He inherited his father’s business and taught himself to such an extent and to such a high level that in 1728 he became a member of the prestigious Royal Society (www.londongardenstrust.org/features/millhill.htm provides a good biography of Collinson). His greatest interest was plants and gardening, and he was responsible for importing many plants such as magnolias, kalmias, rhododendrons, azaleas and cedars of Lebanon, which were then relatively new to the UK, into the country. He imported these plants in great quantities so that these could be planted all over the country and thereby enriched and transformed the landscape. His legacy may be seen in many of the landscaped gardens of the country’s great houses.

When Collinson’s father-in-law died in 1748, he inherited Ridgeway House in Mill Hill, which was built in about 1525, and moved there from Peckham. Apparently:

“The house had no particular architectural merit; it was described as “double-fronted” with French windows” that open onto the garden.”

Not only did he move his family from Peckham but also all the plants he had been growing there. At Mill Hill he created a wonderful garden, about which he wrote:

“Very few gardens if any excel mine at Mill Hill for the rare exotics which are my delight.”

Collinson became a good friend to a frequent visitor to England, the American Benjamin Franklin (1705/6-1790), who became a vegetarian in his teens, but is better-known for other achievements. Many of these were in the field of scientific research. The two men corresponded regularly (https://founders.archives.gov/search/Correspondent%3A%22Collinson%2C%20Peter%22%20Correspondent%3A%22Franklin%2C%20Benjamin%22). Much of the contents of their letters that sailed across the Atlantic concerned the exciting discoveries that Franklin was making in fields such as electricity. In the letter dated 28th of March 1747, Franklin thanked Collinson for his:

“… kind present of an electric tube, with directions for using it, has put several of us on making electrical experiments, in which we have observed some particular phaenomena that we look upon to be new. I shall, therefore communicate them to you in my next, though possibly they may not be new to you, as among the numbers daily employed in those experiments on your side the water, ’tis probable some one or other has hit on the same observations.”

Other matters were also discussed. For example, in a letter dated 9th of May 1753, Franklin wrote to Collinson:

“I have often observed with wonder, that Temper of the poor English Manufacturers and day Labourers which you mention,  and acknowledge it to be pretty general. When any of them happen to come here, where Labour is much better paid than in England, their Industry seems to diminish in equal proportion. But it is not so with the German Labourers; They retain the habitual Industry and Frugality they bring with them, and now receiving higher Wages an accumulation arises that makes them all rich.”

Much of Collinson’s correspondence with Franklin was to keep the latter up to date with scientific developments in Europe, especially those relating to new German experimentation with electricity. And much of Franklin’s correspondence with Collinson reported the results of his experiments with electricity in America, which Collinson conveyed to The Royal Society. It was these letters that were the basis of a book published by the Royal society in 1751, “Experiments and Observations on Electricity”, which is one of the most important scientific publications to emerge from 18th century America.

Solander travelled to England in 1760 to promote the system of classification of biological organisms devised by Linnaeus. In 1753, Linnaeus named a genus of flowering plants, ‘Collinsonia’, to honour Collinson. It was Collinson, who got Solander the job of classifying the natural history specimens in Sir Hans Sloane’s collection, which formed the basis of the recently established (1753) British Museum, which opened to the public in 1759. It was the combined efforts of Collinson and Solander that persuaded the British to accept the Linnean system of classification. In 1768, Solander was one of the participants on Captain Cook’s first voyage to the Pacific Ocean, and thus became the first Swede to circumnavigate the Earth.

Collinson died in 1768. From 1801, his property at mill Hill was owned by the botanist Richard Anthony Salisbury (1761-1829), a founder member and the founder Secretary of the Royal Horticultural Society. In 1807, he sold it to the group who founded the Protestant Dissenters Grammar School. the forerunner of Mill Hill School. Apart from six trees in the school’s grounds, much of Collinson’s collection of plants has disappeared. Ridgeway House, which housed the school at first, was demolished in 1826 when the present grand school buildings were constructed. Collinson would have been pleased to know that Mill Hill School was:

“… first educational establishment to provide a first class education for the sons of dissenters, those whose religious or philosophical outlook did not conform to that of the state and who, like Collinson, a Quaker, were barred from the attending the established seats of learning.” (www.mhps.org.uk/collinson/botanical-contribution.asp#millhill).

When I saw the old wall running beside the Ridgeway in Mill Hill and what was written on the plaque affixed to it, little did I realise that such an important man in the scientific community of the 18th century had lived on the other side of it. 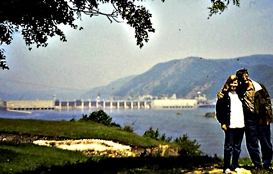 In May 1990, I drove around Serbia, then in (the now ‘former’) Yugoslavia. At first we followed the River Danube eastwards coming close to Romania, a country I have yet to visit. I wrote a book, “SCRABBLE WITH SLIVOVITZ“, which describes my impressions of Yugoslavia as I found it on numerous visits to the country between 1973 and 1990. Here is an excerpt from the book describing how I glimpsed Romania from a short distance – it was so near, yet so far:

Beyond Tekija, the river, which had been flowing north-eastwards, made an almost ninety-degree turn, and then began heading southeastwards. The island of Adakaleh has lain hidden beneath the waters flowing around this bend ever since 1970, when a dam was constructed further downstream. In 1878, the Congress of Berlin redistributed the formerly Ottoman Balkan territories between Austria-Hungary, Serbia, Bulgaria, and other countries. However, the tiny island of Adakaleh was overlooked during the proceedings of this complicated conference. It was not assigned to any of the countries that were grabbing the spoils from the ‘Sick Man of Europe’. Thus, it remained a part of the Ottoman Empire, albeit an isolated enclave. At first, it was a personal possession of the Sultan, and then it became part of Turkey. In 1923, it became Romanian territory. Until its evacuation in 1970, its small population was entirely Turkish. Most of them returned to Turkey, but a few settled in Romania. If I had to admit to having any regrets in my life, one of them would be not having visited that fascinating island before it
was submerged. Incidentally, the word ‘kaleh’ that forms part of the two names Adakaleh and Kalemegdan (in Belgrade) is the Turkish word for‘fortress’.

We drove a little further downstream, and arrived at the dam which wasresponsible for submerging Adakaleh, the fortress at Golubac, and Lepenski Vir. The Đerdap Dam (also known as the ‘Iron Gates Dam’) was a joint venture between Romania and Yugoslavia. It became functional in 1972. We parked the car, and walked almost up to the Yugoslav end of the massive hydroelectric barrage. The forest of pylons, under which we stood, emitted an eerie crackling sound; our hair felt as if it was standing on end and we began to sense a dull headache. There was truly electricity in the air. After gazing at this marvel of modern technology, we stepped back in time. A few Km further downstream, we visited the Roman ruins at Diana, from where we had a very good view of a village on the Romanian shore.

The town of Kladovo was our next stop. From its promenade beside the Danube we could easily see people walking along the opposite riverbank in the much larger Romanian town of Drobeta-Turnu Severin…

and also on Amazon as well as Kindle

The photo, taken in 1990, shows my travelling companions and in the background the Đerdap Dam and the distant Romanian bank of the Danube

My late and much-loved mother was very protective of her two children. She saw dangers everywhere. We were not allowed to go near to electric wall sockets just in case we got an electric shock. Intelligent as she was, I have the feeling that she believed that electricity flowed out of the holes in the socket like water from a tap.

During my childhood, my aunt and uncle used to smoke Benson and Hedges cigaretess that were supplied in nice small hinged metal boxes, which when empty were very useful for storing small objects. When one day I was given one of these boxes, empty, my mother confiscated it immediately. She was concerned that I might cut my fingers on the sharp edges of the box.

As for matches, much caution was needed here. Despite the fact that her grandfather had owned a factory that manufactured safety matches, even safety matches were deemed unsafe by my mother. Therefore, we were forbidden to handle boxes of  (even safety) matches just in case they should spontaneously ignite in our hands or packets. I am sure her intentions were well meant, but sometimes they went a bit too far. This excerpt from my book “Charlie Chaplin Waved to Me” (he did!) shows how her anxiety sabotaged what promised to be a wonderful hiking trip:

“The four of us (aged 17) embarked on a second youth hostelling trip the following Easter. Once again, we took a train to South Wales, and made our way up to our first hostel, which was located at Capel y Ffin in the Black Mountains near to the English border. We spent the night there, and awoke to discover that snow had begun to fall.

I had been instructed that I had to telephone home every morning to ensure that my mother knew that I was still alive. I rang from the hostel’s public telephone and my mother answered. She had heard on the radio weather forecast that there was snow in Wales, and asked meabout it. When I said that it had begun falling where we were, she ordered that we return to London immediately. Believe me, this was not an order that could be discussed. My mother, anticipating that we would surely be lost like Scott of the Antarctic in an avalanche or in freezing snow drifts, had to have us back as soon as possible. I broke the news to my 3 friends, who were furious. For about an hour they kept offering me reasons that I should give my mother in order to try to change her mind about our premature return. Eventually, they gave up. We all knew that none of these would work. And, because, I imagine, they feared my mother, we set off back to London. I have never been allowed to forget this fiasco. Even Hugh’s mother, now in her eighties, often recalls her amazement when she learnt how my mother had successfully wrecked our trip.“

“Charlie Chaplin Waved to Me” is available by clicking: HERE