NOBODY IS PERFECT, not even yours truly.

I was a pupil at London’s Highgate School when I was studying to take state examination, then known as ‘O Levels, taken by 16 year olds. I was studying for 9 subjects, but decided to drop one of them, German. Its grammar was beginning to defeat me and to jeopardize my chances of success in the other 8 subjects.

German was not the only language that was causing me trouble as I approached the O Level exams. Unknown to me and possibly unnoticed by our English teacher, Mr B, my command of written English was insufficient for me to pass the English Language O Level exam. It was the only O Level that I failed. I passed the other subjects, but without displaying much academic excellence.

My failure to achieve the pass marks in English Language cannot be blamed on anyone except me, but there were factors that predisposed me to downfall.

During the examination, I attempted an essay that asked the candidate to discuss whether or not it was fair that pop musicians often earned more than nurses. Being by nature somewhat contrarian, I decided to write an essay in defence of the high remuneration of pop musicians. This idea, to which I no longer subscribe, expressed with poor grammar and spelling, cannot have made the person marking my paper feel sympathetic to me.

The other predisposing factor was our teacher Mr B. He was far more interested in using class time analyzing the poetry of Ted Hughes and Philip Larkin than ensuring that all of his charges were proficient in basic skills such as grammar and essay writing.

Failing English Language did not prevent or delay my commencing the subjects in which I was to prepare for the A Level examinations that were required for admission to university.

One of my three A Level subjects was biology. The senior biology teacher was Mr S, affectionately known by his first name George. He set us three essays per week. On Saturday mornings, we had a double-length period (one and a half hours) with him. During this, he went through our essays, pointing out their good points and bad ones. The essays of one student, ‘P’ were particularly dreadful. His spelling was awful as was his punctuation: there was none except a full stop at the end of each foolscap page. And, to my annoyance and surprise, P passed English Language O Level at the same time as I failed.

Six months after failing my English Language O Level, I took the exam again. I passed with a good grade. I believe that I had learnt a great deal about essay writing from George’s Saturday essay critiquing sessions. I shall always be grateful to him.

On Saturday mornings, parents thinking of sending their sons to Highgate were shown around the school. The biology laboratory, where the essay classes were held, was on the tour. George, who was a genial old fellow, allowed us to relax during the Saturday morning classes. However, he always told us that if we heard the door to the laboratory being opened, we were all to act as uf we were concentrating on something serious while the parents peered in.

On Friday afternoons, we had a three hour practical class during which, for example, we dissected the parts of dogfish not required by fishmongers. Friday lunchtimes found George drinking in one of Highgate Village’s numerous quant pubs.

George used to arrive at the Friday afternoon practical classes having drunk far too much. For the first hour of the class, he was a menace, arguing with anyone unwise enough to approach him. After about an hour, he used to sit down and fall asleep. The last two hours of the class were supervised superbly by George’s deputy, Mr Coombs.

George was a wonderful teacher. He inspired his pupils’ enthusiasm for biology. Like my PhD supervisor, Robert Harkness, his range of interest extended from microscopic intracellular detail to the whole organism. Once, when walking to the Dining Hall with George, he stooped down and picked up a fallen tree leaf. He asked us what kind of tree had produced it. None of us knew. He said:

“That’s the trouble with you youngsters. You know all about DNA, but you cannot recognise a leaf from a plane tree.”

George was, as far as we knew, probably celibate. When we reached the part of the biology syllabus that dealt with human reproduction, he told us:

“You know all about this. You can read up the details in the book.”

I have wandered from my starting topic somewhat. Maybe, you were beginning to believe that I was trying to distract you from my sad performance in English and from thinking that, given my record, I have great ‘chutzpah’ writing and publishing books.

Picture shows coat of arms of Highgate School, founded in 1565

I must have been about eleven years old when the headmaster of my preparatory school, the Hall School in Hampstead, interviewed all of us individually in preparation for our applications to secondary school. When I had answered several questions using the word ja (pronounced ‘yah’), the headmaster said that it was wrong to say ja when I should be saying ‘yes’.

The reason that I said, and often still say, ja instead of yes is that my parents were born and brought up in South Africa where ja is often used to express the affirmative.

In my childhood, I heard my parents using words that form part of South African English. At table, I always wiped my hands and mouth with a serviette, rather than a ‘napkin’. And, when we relaxed we usually sat in the lounge, rather than in the ‘sitting room’ or ‘drawing room’.

If I wanted to see a film, my father would enquire at which bioscope it was being shown. And, if a light bulb needed changing, he would insert a new globe.

When we were in the car we used to stop at a robot, if the traffic light was showing a red light and then proceeed when it changed through amber to green.

By now, you can see that I was raised in England, but acquiring vocabulary that was only used many thousands of miles away below the Equator in South Africa. So, it was not surprising that I answered the headmaster with ja instead of ‘yes’. But, he probably had no idea about my parents’ background.

Many years after leaving home, I began visiting India and encountered another local English vocabulary. For example, when the car needs more fuel, you fill up at the petrol bunk. And, if you have baggage, you put it in the car’s (or bus’s) dickie, rather than the ‘boot’. And en-route you drive round a circle, rather than the ’roundabout’. When you board a train, you do not enter a carriage. Instead you board a bogie. If you want your coffee without sugar, do not say ‘without sugar’ but do ask for sugar less.  And, so it goes on…

English might well be one of the world’s most used languages, but it abounds with regional variations. American English is a prime example of this. As Oscar Wilde wrote:

“… we have really everything in common with America nowadays, except, of course, language“ 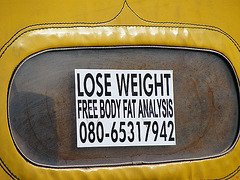 Waiting for a train

Training with a weight:

When two words have the same spelling or same pronunciation, they are called ‘homonyms’