Some years ago our daughter was in Bombay. She rang us and told us that she was pleased that she was staying within walking distance of Fashion Street.

Imagining that Fashion Street was something like London’s Bond Street or the Rue Faubourg St Honoré in Paris, my heart sank hearing this. Was our daughter going to spend all of her money in Fashion Street, I wondered.

Several months later, I visited Bombay and saw Fashion Street for the first time, and then I realised rapidly that I need not have worried. Fashion Street, unlike Bond Street, is a place to get clothes at very reasonable prices.

Of my attempts to learn to drive a car, I will write on this subject at another occasion. Suffice it to say that by the summer of 1982, when I had been practising dentistry for several months, I passed the Driving Test at the age of thirty years. I began to enjoy driving and cars in general. I changed my car often. Over a period of eleven years while I practised in Kent, I possessed (in the following order): an Austin Allegro, a Volkswagen Polo, a Volvo 340, then two Volvo 240s, and then a Volvo 850. The last two cars I owned after those were Saabs. 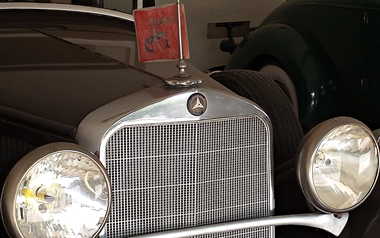 Some time during my eleven year stay in Kent, I fancied owning a Mercedes Benz. In my mind, this make of car rated above all others. Apart from the company’s long heritage (it started in the late 1880s), the cars it produced were reputed to be strong, reliable, and very roadworthy. It is of interest to note that Adolf Hitler rode around in Mercedes cars. I suppose he must have known that the Mercedes in the company’s name was chosen because Mercedes was a daughter of Emil Jellinek (1853-1918), a motor manufacturing entrepreneur who created the Mercedes trade mark in 1901. Emil, the son of a rabbi, was married to Mercedes’ mother Rachel Goggmann Cenrobert, who was of French-Sephardi descent. Therefore, the car Hitler enjoyed was named after a Jewish woman. But I digress.

A new Mercedes Benz dealership opened close to the practice, where I worked. One lunchtime, I drove to the dealership to test drive a Mercedes estate car. A salesman drove me about a mile, and then let me take the wheel on the way back. At a certain stage, I needed to operate the handbrake. I looked for it in the usual place on the central console that separates the two front sets, but it was not there.

“Where is the handbrake?” I asked the salesman.

“I have no idea,” he replied, “I have never driven this model before.”

He thought for a minute, and said:

“Try that handle beside your left leg.”

He was right, but my confidence in him diminished.

When I had driven the car back to the dealership, I asked to be shown some pre-owned cars, as the new ones were way beyond my price-range.

Another digression seems appropriate at this point. Many years after visiting the Mercedes dealership, I hired a car at Heathrow Airport. It was an up to the minute luxurious Vauxhall estate car. A charming young Asian lady handed me the keys and told me where to find the vehicle. I sat in the driver’s seat and started the engine. Immediately, I noticed a warning light telling me that the handbrake was engaged. I looked for the handbrake. It was neither on the central console nor was there a handle near the foot pedals. I was flummoxed. I returned to the car hire office feeling rather foolish and described my problem to the young lady. She smiled before explaining that the handbrake was operated by a small button on the central console near the gear change stick. After returning to the car, I found the button, which was no bigger than the surface of a dice such as is used in board games. It was flush with the rest of the console and looked like a decoration. 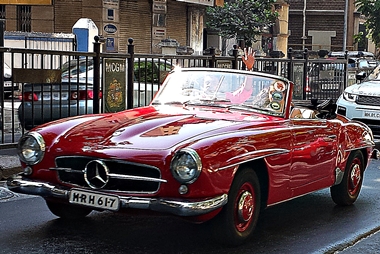 I was quite taken with a greenish Mercedes saloon car, which was almost favourably priced, but still some way beyond my reach. The salesman opened the vehicle and invited me to sit in the driver’s seat.

“What do you think?” he asked.

“Very nice,” I replied, “but I’m not so keen on that plastic trim on the central console around the gear stick.”

“Sir,” he exclaimed, affronted, “that’s not plastic. It’s highly polished wood trim. The very best. This is a Mercedes, you know.”

“Sorry,” I replied, not totally convinced, and continuing, “I like the car. Are you prepared to lower the price?”

“Oh no, sir, that is totally against our company policy. The price we offer is the only price. Our company does not haggle.”

Lunchtime was nearly over, so I said that I would think about the car and would let him know my decision soon.

Twenty-four hours later, I was eating my lunch in the practice when the telephone rung. One of my colleagues answered it and then handed me the receiver. It was the salesman, whom I met the day before.

“Thank you,” I replied, “let me think about that.”

Even with the discount, the car was still beyond my means.

Twenty-four hours later, two days after visiting the Mercedes dealership, I received another call from the salesman, again whilst I was eating lunch.

“I have more good news for you, My Yamey,” he began, “my manager has authorised a further thousand-pound reduction in the cost of the car you are interested in. That’s a discount of two thousand pounds. Makes the motor very reasonable, don’t you think?”

I told him that I was not sure about buying at that moment, and that I would get back to him if I changed my mind. I had by then decided that not only was the car too expensive even with the unexpected discounts from a firm that never offered discounts, but, also, I was actually happy with the car I already owned.