For our full enjoyment

BIG WOOD SEEMED large to me when I was a child. Although it does not live up to its name, it feels like a big wood once you enter it. Located in the heart of Hampstead Garden Suburb (‘HGS’), this woodland and the much smaller nearby Little Wood are quite ancient. They were part of a forest that was at least 1000 years old, part of land given to Wealdhere, who became Bishop of London late in the 7th century. The woods and surrounding land remained church possessions until 1911, when they were leased to the HGS Trust by the Ecclesiastical Commissioners. According to the londongardenstrust.org website:
“When Hampstead Garden Suburb was being planned in 1907, its instigator, Dame Henrietta Barnett, was committed to providing green spaces within the housing, planting trees and preserving those that existed. When additional land was acquired to extend the Suburb in 1911, Big Wood was leased from the Ecclesiastical Commissioners and preserved as woodland. In 1933 Finchley UDC took on the freehold.” 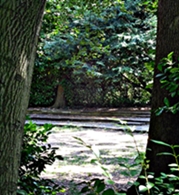 There is a report that circus elephants used to be kept in a field that existed between Big and Little Woods before the construction of houses in this location (now Denman Drive North and South). Colin Gregory wrote (www.hgs.org.uk):

“Before leaving this story, we should pay our respects to one of the last occupiers of Park Farm: the circus proprietor Lord’ George Sanger … His descendants continued the circus in operation until the 1960s. It is said that when he owned Park Farm he allowed the circus animals to winter on his land. An elderly resident of Denman Drive – constructed in 1908 on what was once Westminster Abbey’s land – used to recall ‘elephants grazing’ in the field between Big Wood and Little Wood, before Denman Drive North and Denman Drive South – constructed in 1912 on what was once the Bishop’s land – were completed.”

We re-visited the woods recently on a hot sunny afternoon. We entered Big Wood from the end of Temple Fortune Hill. At this entrance to the tiny forest there is a wooden gate that was put up to commemorate the 29 residents of HGS who died during WW2.  I do not remember seeing this gate when I was a child in the 1960s. Often in those days, my friends and I used to play in the woods, which I recall as being dark and dingy.

Lopa and I walked leisurely from one end of Big Wood to the other along good paths in about five minutes. This made the wood seem far smaller than its name suggests. However, when we wandered off the main tarred paths onto the numerous dirt tracks, made uneven by semi-exposed roots, threading their way amongst the trees, tree stumps, broken branches, and clumps of stinging nettles, the wood seemed dense and dank despite the fine blue sky above the tree tops. Calls of hidden birds punctuated the silence.  On these small paths, we lost all sense of direction and managed to get lost within the tiny area of woodland.

We had asked some locals how we could reach Little Wood from Big Wood and they had told us to follow a certain path, which they pointed out. We set off along it, but it kept bifurcating every few yards and we were clueless as to which of the two branching paths was the one to follow to arrive at Little Wood. Eventually after going around in circles, we gave up and left Big Wood via Oakwood Road, which is appropriately named as many of the trees in the two woods are oaks. We entered Little Wood from Denman Drive North, the continuation of Denman Drive South. These differently named sections of the same stretch of road link the two woods and must pass close to the field where circus elephants once grazed.

Little Wood, whose history is the same as that of Big Wood, contains one of London’s lesser-known performance spaces, a small open-air theatre.  This was created in 1920 by the Play and Pageant Union, one of two drama groups that later merged to form the Garden Suburb Theatre. It was restored in 1997, and now looks like it would benefit from some more restoration. The stage is a clearing in the woods surrounded by trees and bushes. The audience sits on a circular stepped auditorium consisting of three layers of paving stones set in a curve around the stage.

The theatre in Little Wood occupies an important place in my memories of childhood. It was here when I was about ten years old, back in the early 1960s, that I first saw a performance of Shakespeare’s “A Midsummer Night’s Dream”. It must have been on a summer evening when I watched this with a sense of wonder that still lives with me. Apart from the odd logs, there were no other props. The actors and actresses appeared on, and disappeared from, the simple stage almost magically, popping through gaps between the trees and bushes surrounding the theatre.

I cannot begin to imagine what The Bard was thinking when he created The Dream, but I feel sure that he would have approved of its being acted out in on the sylvan stage in Little Wood. Furthermore, I think that he would have appreciated a play that contains six amateur actors in its plot being performed by a troupe of amateur actors such as we were watching that far-off evening. Since watching that play in Little Wood so many years ago, I have seen several other performances of “A Midsummer Night’s Dream”, and only one has given me as much pleasure as that. It was a recent staging of the play directed by Nicholas Hytner at the relatively new Bridge Theatre near London’s Tower Bridge. In that recent show, as the theatre’s publicity said:

“The theatre becomes the forest – a dream world of flying fairies, contagious fogs and moonlight revels.”

And, the result at the Bridge was more than wonderful, although seeing the play in a real forest (Little Wood, in my case) is hard to beat.

Returning to the little theatre in Little Wood the other day, though it was out of use during the Covid-19 pandemic, it kindled many happy memories. Although I had not visited that theatre for many decades, it looked just as I remembered it.

Life is  so very fragile

While walking in the park

This fox was seen next to the Serpentine lake in Kensington Gardens, London

Is not Nature so wonderful? 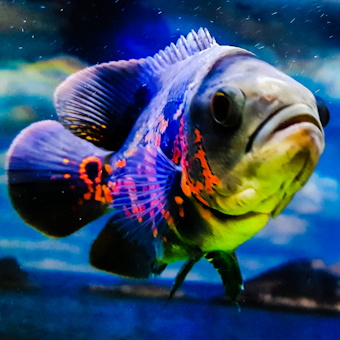 This wonderfully coloured fish was swimming about in a fish tank in the lobby of a hotel in Gulbarga on Karnataka (India). It illustrates the immense variety of the natural colourings of animal life, which rivals the many attempts of artists to produce original creations

A creature of God’s making 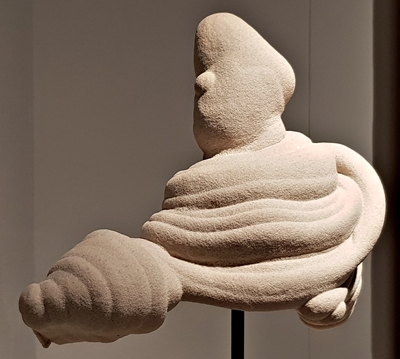 Quartz and chalk were fused

millions of years ago

These two gogottes were from Fontainbleu. They were on sale at Christies auction house in London