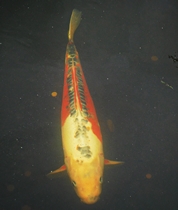 Under the still  water

In a Japanese pond

At first, I was daunted at the prospect of watching a seven hour drama at London’s National Theatre. Then, remembering that I had endured an eleven hour bus journey in Gujarat and several long intercontinental flights, I decided that sitting comfortably at the theatre for seven hours including intervals would not be too bad, and I was right.

The play we watched, “The Seven Streams of the River Ota”, by Canadian playwright Robert Lepage (born 1957 in Quebec,), is divided into seven acts or installments. I found five of those installments to be highly enjoyable. The other two were less good in my humble opinion.

The River Ota runs through the Japanese city of Hiroshima, unfortunately famous for being the first civilian target of an atomic bomb in 1945. One of the main characters in the play by Lepage is a woman who was blinded, as a small child, by the atomic bomb blast’s flash. Each of the seven acts of the drama is linked to her or to characters connected with her directly or indirectly. Therefore, although the play’s plot is quite complicated, there is an easily discernible thread that runs through it.

At times the drama is witty and humorous and at others tragic. However, throughout the performance, the subject matter is both sensitive and moving. The ingeniously crafted play touches on all kinds of important historical events that affected Japan and the Japanese between 1945 and the late 1990s when the play was written. It also makes reference to Theresienstadt, one of the Nazi concentration camps. At first, I was not sure of the relevance of this scene set in the camp, but afterwards it dawned on me. It was an important background to one of the characters, who plays a major role in the latter parts of the play.

Another of the play’s myriad of topics reflects the playwright’s origin, Quebec. There are some very entertaining scenes in which the characters speak in Canadian French (with its particular accent) such as would be heard in Quebec. At times, Lepage makes use of the play to poke fun at cultural rivalry between the Canadian French and the French in France. He also makes reference to Canada’s objection to French nuclear tests that were being carried out in the Pacific between 1966 and 1996. And, nuclear tests relate directly to the main theme of the play, the atomic bomb exploded at Hiroshima.

Without going into detail about the very complicated plot, let me say that this play was highly fascinating, well acted by members of Lepage’s theatre ensemble Ex Machina, and the sets were superb. Sadly, this long play is only being given a short run at the National Theatre. Its final performance, viral microbes permitting, will be on the 22nd March 2020.

As for my initial fears about sitting for seven hours in the theatre, these were unrealised. The time shot past, so intriguing was the play. Lepage’s play was for me as exciting as at least two other epic length dramas I have enjoyed: “Angels in America” by Tony Kushner, and “The Coast of Utopia” by Tom Stoppard.