We made several visits to Central Europe in our car during the mid-1990s.

Twice during those years, we drove to the Czech Republic, entering it from the eastern edge of what had formerly been prosperous West Germany. The Western part of the Czech Republic, which had been the largely German-populated Sudetenland before 1945 is thickly forested with tall dark pine trees. We were dismayed to discover that for the first ten or so kilometres beyond the border, the roads through the Czech forests were lined with ‘gentleman’s’ clubs and prostitutes.

When we were in the middle of one forest, the rain began pouring down. At the corner of a road junction in the middle of the wood, we saw a young lady dressed in a shiny red jacket with matching short hot pants. Our three-year old child saw the woman, took pity on her, and said:

“Shouldn’t we offer her a lift.”

The innocence of our child was touching.

Hungary is south of the Czech Republic. In the late 1990s, we drove into it from Austria. For the first few kilometres of Hungarian territory, we saw no prostitutes, but numerous dental surgeries with signs both in Hungarian and German. Often the dental surgery was in a little compound that included a restaurant and a food shop. The presence of so many dentists offering their services so close to the border with Austria suggested that dentistry in Hungary was good value compared with that in Austria. And, while a member of an Austrian family is having his or her teeth repaired, the rest of the family could enjoy a good Hungarian meal and buy some tasty souvenirs to take back home.

The proximity of Bohemian prostitutes to the Czech border and Magyar dentists equally close the Hungarian border made me consider a possible uncomfortable comparison. I wondered whether people ever see some similarity between the two professions. I hoped not!

In about 1977, I travelled to Greece overland with my PhD supervisor (‘Prof) and his wife (‘Wink’). Every year they towed a caravan across Europe to their favourite camping spot near Platamon on the coast of northern Greece. They were averse to camping overnight in campsites. They preferred to camp ‘wild’ at spots of their own choosing. Their journey involved three nights in the former Yugoslavia, a country where camping outside official campsites was against the law. However, over the years they had found several places in Yugoslavia where they could camp ‘wild’. Prof and Wink were always anxious when they travelled through that country, constantly worrying that their illegal camping activities would get them into trouble. Let’s join them on the last few hours before leaving southern Yugoslavia (in what is now Macedonia) and an official campsite, where circumstances forced us to stay one night. Here are two extracts from a book, which I have not yet published. 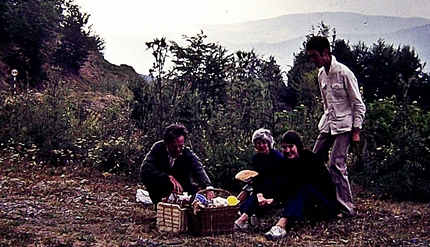 Picnic north of Ohrid in Macedonia, 1977. The author is standing

“After lunch, we drove onwards towards the town of Ohrid that lies on the eastern shore of the lake bearing the same name. As the sun began to set, we faced a problem. Prof and Wink had never travelled to Ohrid before and knew of no places where we could camp ‘wild’. Driving along, we could see nowhere suitable to do so. Cautiously, I recommended the town’s campsite. I had stayed there a few years earlier with my friend Hugh. It was a lovely spot next to the lake shore. Reluctantly, Prof agreed that this would have to be where we should spend the night. At the entrance of the camping grounds, we had to surrender our passports in order that the camp could register our presence to the police. Prof was reluctant to let go of his passport, but when the officials assured him that they did not need it for long, he gave in.

While supper was being prepared, I took a stroll around the campsite. An elderly employee of the campsite approached me and greeted me like an old friend. When I shook his outstretched hand, I remembered who he was. I had met him the first time I camped in Ohrid for a week in the late 1960s. On that visit, I used to walk from the campsite to the town in order to do sightseeing or to catch buses from it to other places in the area.  At the end of each day, I used to walk back to the campsite, where Hugh had sunbathed all day. On one of these return journeys, this man, who greeted me so many years later, had seen me on the road and had invited me into his home to meet his family. I was touched that he recognised me…”

“… we continued our journey towards Greece on the following morning. We left Ohrid and drove across the mountains east of Lake Ohrid to Resen, where we did not stop. Had we not been in so much of a hurry to leave Yugoslavia – Wink and Prof always felt more than a little uneasy being there – I would loved to have visited the nearby Lake Prespa, which, like Lake Ohrid, shares its waters between Yugoslavia (now Macedonia or FYROM or Northern Macedonia) and Albania. Unlike the bigger Ohrid, Prespa also shares its water with Greece. In fact, the frontiers of the three Balkan countries meet in the middle of the lake. We crossed another mountain pass after leaving Resen, and then descended into the plain in which the town of Bitola stands.

We parked near a large mosque in Bitola, and then began wandering around an open market. Prof stopped by a stall selling green grapes. There were flies crawling all over them. He took out a notebook and pencil, and then pointed at a fly on one of the grapes. He was hoping to learn the local word for that particular kind of fly; he was always trying to improve his vocabulary in the languages that he encountered en-route. He even carried a miniature tape recorder in which he recorded people pronouncing words in, usually, Modern Greek. He used to listen to these recordings and try to repeat them in order to improve his pronunciation. The seller of the grapes, seeing Robert’s interest in his wares, was hoping to make a sale but could not understand what the foreigner was asking. Both parties were left unsatisfied. 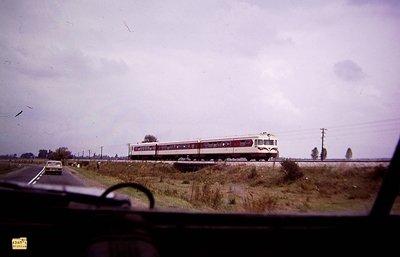 After leaving Bitola we drove southwards across a flat cultivated plain until we reached the Yugoslav customs post at Medzhitilija. We waited in a queue of vehicles until we drove under the wooden canopy over the roadway adjacent to the border officers’ cabin. Before handing our documents to the official waiting alongside the car, Prof looked up into the eaves of the steeply pitched roof and began pointing at something. The customs officer looked up and then at Prof, who was frantically leafing through a small well-worn Serbo-Croatian pocket dictionary.

“I wonder what the Yugos call a house-martin’s nest,” Prof kept muttering.

The officer looked him, puzzled rather than impatient.

“For heaven’s sake, let’s get on,” Wink shouted at her husband from her perch behind us.

She, even more than Prof, was keen to leave the communist country where, on previous trips, they had had minor though worrying brushes with authority.

Minutes later, we were driving south along a Greek road …”