HOME HOUSE IN London’s Portman Square was completed in 1777 for the wealthy Elizabeth Home, Countess of Home (c1703-1784). Born in Jamaica into a slave-owning family, her wealth was produced by the unpaid labour of slaves imported from Africa. The house is remarkable, especially for its intricately detailed interior décor designed by the architect Robert Adam (1728-1792).

In 1933, Home House became home to the Courtauld Institute of Art, now part of the University of London. A close friend of mine, now sadly deceased, studied at the Courtauld for both his bachelor’s degree and his doctorate. Whilst writing his doctoral thesis, my friend was supervised by Sir Anthony Blunt (1907-1983). Blunt was the director of the Courtauld from 1947 to 1974. He was also in charge of the Royal Collections of art from 1945 onwards. In addition, he carried out much important scholarly work in the field of history of art. Blunt, as director of the Courtauld, was given a flat in Home House.

Until 1979, few people knew, or even suspected, that Blunt had been involved with spying for the Soviet Union.  When this came out into the public domain, Blunt’s downfall commenced. He was stripped of his knighthood and his Honorary Fellowship at Cambridge’s Trinity College was rescinded. Also, Blunt resigned as a Fellow of the British Academy. Soon after his exposure as an espionage agent, who worked against his own country for the Soviet Union, Blunt ceased residing at Home House. In 1989, the Courtauld Institute shifted from Home House to larger premises in Somerset House in the Strand. Home House remained vacant until 1998, by which time it had been beautifully restored and adapted to become a private social club. During a recent visit to Home House when we were entertained by a friend, our host, a member, took us to see an interesting exhibit, which is housed in the wash basin area of one of the Club’s unisex toilets. We were shown a glass-fronted display case containing a wooden furniture item. It bears a label with the words: “From the bathroom of Sir Anthony Blunt”. The labelled object is the toilet seat on which Blunt must have sat numerous times, and its wooden lid. Another case in the room contains Blunt’s telephone. Although the loo seat and the ‘phone are unremarkable except for their provenance, the rest of Home House is a visual delight.

THE CITY OF WINCHESTER has one of the longest gothic cathedrals in the continent of Europe. Built from 1091 onwards under the auspices of Bishop Walkelin, a relative of William the Conqueror, the bulk of the gothic part of the edifice was erected in the 14th century in the Perpendicular style of gothic. What was created, is exceedingly beautiful and gives a great sense of space. It is a masterpiece of gothic stone masonry. The cathedral stands not far from another large building, also built in a style of gothic inspired by what was achieved during mediaeval times.

This near neighbour is far younger than the cathedral. It is the 19th century Winchester Guildhall, which was constructed between 1871 and 1873. It stands on the site of St Marys Abbey, which was taken over by Henry VIII in the late 1530s during the Dissolution of the Monasteries. The remains of the abbey, which was known as ‘Nunnaminster’, persisted until the 17th century, after which they were removed. Today, some excavated remnants can be seen behind the Guildhall.

The Guildhall was built in the gothic revival style to the designs of the architects Albert William Jeffery (1840-1915) and William Skiller (1838-1901), who also submitted a design for a town hall for Hastings in Sussex. Tragically, Skiller committed suicide in 1901 (http://hastingschronicle.net/archives/architect-hangs-himself/). The Guildhall was later extended by J. B. Colson (1820-1895), who was the surveyor of Winchester Cathedral.  The original building is rich is features borrowed from mediaeval gothic, but it is topped by roofing styles that remind the viewer of French ‘chateaux’. One source summarises the Guildhall’s appearance as:

“ Gothic, symmetrical, with a middle tower and this as well as the angle pavilions provided with French pavilion roofs”; and as having a “deeply vaulted porch” at the entrance — for all this part “[t]he style is Second Pointed,” while Colson’s long extension is “much plainer”” (https://victorianweb.org/art/architecture/winchester/1.html).

Without doubt, the cathedral is a far finer building than the Guildhall, but both are impressive in their own ways. The cathedral’s integrity depends on its gothic features that have both structural and aesthetic functions, whereas in the case of the Guildhall these features have a greater decorative than structural purposes.

The Guildhall is an example of so-called ‘gothic revival, which lovers of London’s St Pancras Station and Bombay’s Victoria Terminus (Chhatrapati Shivaji Maharaj Terminus) will appreciate’. Years ago, I read “The Gothic Revival: An Essay in the History of Taste”, written by the art historian Kenneth Clark (1903-1983) in 1928. One thing that impressed me was, if I recall correctly, that the author queried whether the gothic style of architecture ever really died out in England, as it did elsewhere in Europe. Clark suggested that the gothic style continued to be used. In other words, what is described as ‘gothic revival’ is simply a continuation of the early use of this style. It is my impression that by the 19th century, when, for example, the Winchester Guildhall was built, architects were often simply borrowing features of earlier gothic buildings, as, for example Winchester Cathedral, and applying them often more mechanically than artistically. Often when the gothic style was being used structurally, as is the case in many churches built during the Victorian era, it tends to be imitative rather than creative, as is the case in the great mediaeval cathedrals and other churches. There are a few exceptions, where the 19th century architect manages to use the gothic style both structurally and artistically, as for example in the Church of St Augustine in London’s Kilburn.   Be that as it might be, The Guildhall does not lack in good aesthetic features and adds positively to the rich tapestry of the architectural scene in the historic centre of the city. I recommend visitors to Winchester not to concentrate all their time at the Cathedral but to spare some to view the Guildhall before seeing the other sights of the city. 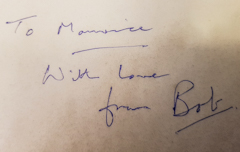 THERE WERE AT LEAST 3 JEWISH girls in my wife’s school class in Calcutta during the mid 1960s. Then, the city had a sizeable Jewish community, many of its members and their ancestors having migrated from Iraq, especially Baghdad.

Recently, a friend gave me an old book about the Tollygunge Club in Calcutta. Inside it, there is an undated handwritten inscription: “To Maurice, with love from Bob”.
My friend did not know who Bob is or was, but told me that the book was part of a collection once owned by Dr Maurice Shellim.

Maurice Shellim, a was born in a Baghdadi Jewish family in Shanghai (China) in 1915 and died in London (UK) in 2009 (see: http://www.jewishcalcutta.in/exhibits/show/notable_members/maurice-shellim).

By profession, Maurice was a medical doctor. According to Dalia Ray, writing in her book “The Jews of India”, he was a Member of the Royal College of Surgeons and Physicians (London), having studied medicine at London’s Guys Hospital. Ray also records that he took part in the functioning of a free medical clinic set up by his coreligionist Dr E Musleah.

After buying a painting by Thomas Daniell (19th century painter of Indian scenes), Maurice Shellim became very interested in Daniell and other British painters in India. Eventually, he published a book about Daniell and his nephew William Daniell: “India and the Daniells: Oil Paintings of India and the East”.

Maurice also published a book about the historic Park Street Cemetery in Calcutta. He had devoted much time and energy to conserving this picturesque resting place for the remains of British families.

In his later years, Maurice and his immediate family moved to London, but he often visited Calcutta.

Most of Calcutta’s Jewish people have left the city to settle abroad. Although anti-Semitism has never been a problem in India, many of Calcutta’s Jewish folk chose to leave in the decades following 1947. Probably, many of them left to improve their economic prospects, but Dalia Ray suggests that because most Indian Jews had been pro British they began to feel that they might begin to feel uneasy in independent India. She also wrote that after the establishment of Israel as a sovereign state, many Jews wanted to fulfil their centuries old desire to reach the Promised Land.

I would not have been likely to have discovered the story of the remarkable, highly cultured Dr Shellim had I not seen that scribbled inscription in an old book.

PS: ‘Bob’ was most probably Bob Wright, a Britisher who lived in Calcutta for over 30 years. He worked for a large company and was involved in the management of the Tolleygunge Club.