SOME OF YOU WILL KNOW that I am interested in the mythical birds that have one body and two heads (for example, the Russian, Serbian, and Albanian double-headed eagles). Few will know about my interest in shirts with two pockets. Most people are happy if their shirt has only one pocket, but not me. For, I like to keep my mobile telephone in one shirt pocket and my small point and shoot camera in the other.

About twenty years ago, during one of my frequent visits to Bangalore (the capital of an Indian state whose crest bears a double-headed bird), we found a store in the busy Commercial Street that sold short-sleeved (‘half-sleeve’ in Indian English) shirts with two pockets bearing the brand name ‘Camel Classics’. The store no longer exists but was close to another clothing shop called ‘Favourite Shop’ and not far from a Bata shoe shop.  Year after year, I returned to refresh my stock of double-pocketed Camel shirts. Then, some years ago, the assistants, who by then knew me well, informed me that the manufacture of my favourite Camel shirts was about to be discontinued. Hearing this, I bought all the shirts in my size that were available in the shop.

Nothing lasts forever. This was true of my Camel shirts, which I wore almost everyday both when at work and, also, when not working. The collars tended to fray. This could be remedied during our visits to Bangalore when we found various helpful tailors who were happy to turn the collars. Even with these repairs, some of the shirts became to disreputable to wear in public.

It appeared that two-pocketed shirts had become unfashionable and therefore less easy to obtain. My wife came up with the solution to the problem of replenishing my shirt stock.

We spent a fortnight in Panjim (Goa) in April 2018. While wandering about in the steamy heat, we spotted a tailoring shop. The tailor was asked if he could replicate one of my remaining Camel shirts. He said that he was able to do so, and we were to return after a week. When we went back after seven days, he had produced two perfect replicas. We wished that we had asked him to have made more than two, but our time in Panjim was running out.

The following trip to India, we decided to find tailors in Bangalore, who were willing to replicate my favoured shirts. We found two, both in the Commercial Street district of the city. We got each to make one shirt so that we could assess who did the best job. A tailor on Dispensary Road ‘won the contract’. He made me another five Camel-style shirts. My stock of double-pocketed shirts is currently up to date. Given the present covid-19 pandemic is preventing us from returning to India in the foreseeable future, I am pleased that we had so many of these items manufactured.

Discussing my liking of the double-pocketed Camel shirts with friends and their unavailability, one of them looked at my Camel shirt, and then pointed out that the American Wrangler company makes the same shirts, which are still easily available. So, I could have replenished my stock by buying them on-line, but this would have been far less enjoyable than finding and getting to know tailors in India. 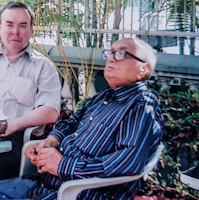 My late father in law was enthusiastic about everything new until his very last days. Every day, he scoured the newspapers to discover the latest events happening in Bangalore. If I was visiting the family, I often accompanied him to events that events that caught Daddy’s eye.

For example, I accompanied to the launch of the new Tata Indica car. When we arrived in time for the launch, there was a large crowd waiting for the official launch. When they saw my aged father in law, dressed in a smart suit and wearing a tie, being supported by me and his walking stick, the crowd parted as did the Red Sea when Moses arrived on its shore. We were given the honour of being first to be allowed to sit in the new car model.

On another occasion, Daddy spotted that there was to be a huge shirt sale, at which customers, who brought an old shirt as part exchange, would be able to buy a new one at a substantial discount.

Before we set off, Daddy had to find a shirt that he was willing to part with. This was a lengthy business because he possessed a large collection of shirts, each one of which needed to be examined and considered. This task was difficult because almost all of his shirts were good quality and in good condition.

Eventually, a shirt was selected for sacrifice, and we set off.

There were many people and an enormous number of shirts at the sale. Daddy carefully examined what was on offer and kept selecting shirts and asking my opinion about them, flatteringly but unwisely overestimating my sartorial expertise.

The hours passed and time for eating lunch was approaching rapidly. After giving my opinion about many shirts, all of a lesser quality and beauty to the one he was going to exchange, I told him that the latest one that he was showing me was the one to buy. He bought it and handed his old shirt as part payment.

When we got back home, Daddy showed the family his new shirt. Nobody liked it. They were horrified that I had allowed him to buy such a ghastly shirt. Yet, Daddy loved it. He wore it often. The picture shows him wearing it, sitting with me in 2005 at the Bangalore Club.