OUR CAR FERRY from Lymington docked at Yarmouth on the Isle of Wight after dark on a rainy evening in September 2022. As we drove to our friend’s house in Ventnor, we passed a building whose name, Dimbola, brought back memories of an exotic trip we made 28 years ago.

In February 1994, my wife and I spent a few days in Sri Lanka on our way back from India to London. It was our honeymoon and Sri Lanka was riven by civil war. Our host in Sri Lanka sent a car and driver to Colombo airport, which, despite its excessively high security presence, was attacked by terrorists soon after we departed for London. For several hours, we drove through the countryside after nightfall. Every few miles, we stopped at police check posts. Unlike bus passengers, who were obliged to leave their vehicles at each of these stops, we did not have to disembark. Our car was fitted with a bright lamp that the driver turned on so that the police could see his passengers without them having to leave the vehicle. It was also likely that our driver and his employers were well known to the authorities. About halfway through our long journey, we stopped at a tea stall in a village. The golden tea was fragrant and delicious. Even now, I believe that it was one of the best cups of tea I have drunk during my long life.

We continued driving through the darkened landscape. Every now and then, animals’ eyes reflected the illumination coming from the car’s headlights. It was only when we made the return trip to Colombo in daylight that I realised our driver’s great skill. The narrow road had many potholes and other defects and wound perilously up and down hillsides and close to deep ravines. Eventually, we arrived at the home of the manager of the tea plantation where we were going to spend about a week. We had met him and his wife at the home of a mutual friend, who lives in Ootacamund (‘Ooty’) in south India. This kind couple, having met us only once, had invited us to stay with them in Sri Lanka.

Mr Jain, our host, had been invited by the Sri Lankan government to revitalise a failing tea plantation. Situated about 4 miles northeast of the small town of Hatton, the estate where we stayed was called Dimbula – and still is. Seeing the name Dimbola on the house on the Isle of Wight made me remember Dimbula in Sri Lanka. I wondered whether Dimbola was a name chosen at random, or whether it was in some way related to Dimbula, where we stayed in Sri Lanka.

On our first full day on the Isle of Wight, the sun shone brightly, and we decided that it was perfect weather to visit Alum Bay to see its famed coloured cliffs and views of the Needles Rocks at the western end of the Isle. To reach this place we drove back along the road we had travelled the previous night. This road runs along clifftops close to the south coast of the island and provides many exciting views. We stopped at a couple of places to enjoy the spectacular coastal scenery, and before reaching Alum Bay, we made yet another stop at Freshwater Bay. By then, we were yearning for mid-morning coffee. Not seeing anywhere open close to the seafront, we drove a little further and noticed that Dimbola has a café.

Dimbola is a two-storey Victorian house with four full height bays, each of which is beneath a roof gable. In the middle of the long southeast-facing façade there is a tall square tower topped with crenellations. This separates the bays into two pairs. The east half of the ground floor houses a second-hand bookshop, which is now closed because its owner does his business on-line only. The west half houses a café, which serves excellent coffee made from beans roasted on the Isle of Wight. Most of the rest of the ground floor and much of the first floor is a museum and its shop. I will go into more detail about this museum soon.

Almost as soon as the waiter came to take our order, I asked him about the name Dimbola. He was not sure, and suggested I asked someone at the museum. After enjoying my coffee – it was so good that we returned for more on a couple of other days – I found someone working in the museum. I told her that I was interested in the similarity of the name of the house and that of the place where we had stayed in Sri Lanka. She told me that a former owner of Dibola had been married to a man who owned coffee (and then later tea) plantations in Sri Lanka when it was British Ceylon, and that the house was named after one of them called Dimbola. I was told that the house at Freshwater Bay was named after the plantation at Dimbula, which is exactly where we stayed in February 1994.

By 1994, Dimbula was a long-established tea plantation. However, it had begun life as a coffee plantation. It had been owned by Mr Charles Hay Cameron (1795-1880). A follower of the great philosopher Jeremy Bentham, Cameron became a barrister, having been called to the bar at Lincoln’s Inn in 1830. In 1835, he went out to India to serve on the Supreme Council of India (which had previously been known as ‘The Council of Bengal’). In 1838, he married Julia Margaret Pattle (1815-1879), whom he met in The Cape of Good Hope (now ‘South Africa’). Their marriage took place in early 1838 in Calcutta (now Kolkata). In 1848, he and his family left India and lived in their homes in London’s Putney and Freshwater Bay on the Isle of Wight. In 1875, he and Julia travelled to Sri Lanka, where Charles owned plantations. They lived there until their deaths. I will return to Mrs Cameron shortly.

The reason that Dimbula now grows tea is that during the 1870s, the market for coffee slumped. The Cameron, both in a poor state of health moved to Sri Lanka because the cost of living there was far lower than in England. During their stay in England, they spent much time at Dimbola between the years 1860 and 1875.

Interesting as was Charles Cameron’s life, that of his wife Julia was exceptionally outstanding. I had never heard of her before having coffee at Dimbola, but our art historian daughter was most excited to learn that we had stumbled upon and visited the former home of the famous photographer, Julia Cameron. TO BE CONTINUED SOON!

WE JOINED A SMALL queue at the vaccination centre, or “hub” as it calls itself, early one sunny but cool morning. All of us were waiting to receive our covid 19 booster vaccine, six months having elapsed since receiving the second of our first two ‘jabs’. Eventually, we were invited into the local hospital, in which the hub is located.

I was directed to a cubicle where a lady, a volunteer vaccinator, was seated. After having been asked some preliminary medical questions and given some advice about possible aftereffects of the vaccine, she said to me, having already noted my name:

“Are you South African?”

“My parents were,” I replied.

“He is a relative of mine.”

“I knew an old gentleman, a Mr Yamey married to a Greek lady.”

“He was my father,” I replied, adding: “How do you know him”

It turned out that the lady’s mother lives next door to where my father lived for the last 27 years of his long life.

Having established that and just before giving me the injection, quite painlessly I should add, she said:

“In that case, I must take very special care of you.”

The world can seem remarkably small, don’t you think?

AFTER A SUNNY DAY spent at Whitby in North Yorkshire, we stopped for a drink at sundown in a small pub for a pre-prandial alcoholic beverage. Behind and slightly above the pub, we could see a well-maintained 12th century parish church with later modifications and a square tower. Below the pub, a narrow stream, lined with bushes and trees, ran alongside the main road. Apart from the infrequent passing car, the place was silent except for some pleasant birdsong. From where we sat on the terrace of the hostelry, we could see a small, sloping village square with a simple war memorial, some parked cars, and a small post box. At first, I did not realise where we had stopped. Then, I noticed that the village is called Kilburn.

There is another Kilburn about 215 miles south of the lovely village where we stopped for an evening drink. The latter is in North Yorkshire and the place with the same name many miles south of it is in north London. Apart from sharing the same name, London’s Kilburn is anything but rustic and peaceful, as many Londoners will know. London’s Kilburn is not really picturesque in conventional people’s eyes; it might appeal to lovers of urban sprawl.  It is a crowded metropolitan area with much commercial activity and a racial profile infinitely more diverse than that of the village in North Yorkshire.

I am not sure which of the two Kilburns is the oldest. North Yorkshire’s village was mentioned in the Domesday Book of 1086 and named ‘Chileburne’. London’s Kilburn was a settlement on an ancient Celtic route, a track between the places now known as St Albans and Canterbury. A priory was constructed on a stream that flowed through where London’s Kilburn now stands. The stream was known variously as ‘Cuneburna’, ‘Kelebourne’, and ‘Cyebourne’.

Whatever the origins of these two Kilburns, I know which of them is the place where I would prefer to linger in front of a glass of bitter. 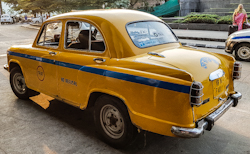 I do not know how many millions of people live in Calcutta, but I know it is well in excess of 14 million.

One day, a friend, M, met us in London. He told us that a mutual friend, D, was married to a woman born in Calcutta. As my wife went to school in that city, M said to her: ” You might know D’s wife.”

My wife replied: “Do you realise how many people live in Calcutta, M?”

Then after a moment, she asked; “What is her name?”

M mentioned a name. Hearing this, my wife answered: “She was a year junior to me at school.”

I thought it was amazing how small the world can seem even when a city as huge as Calcutta is being discussed.

The chance of two people sharing the same birthday is quite small. It is 1 in 365 or 0.0028. Things get more interesting when one considers a group of people. In a room of 23 people, the chances that two people share a birthday is 0.5 or 50%, and when there are 75 people the probability increases to 0.99 or 99% (see: https://betterexplained.com/articles/understanding-the-birthday-paradox/ and https://en.wikipedia.org/wiki/Birthday_problem).

Photo by fotografierende on Pexels.com