A tasty snack dropped by chance;

Sitting by the gate,

The daily life of a cat 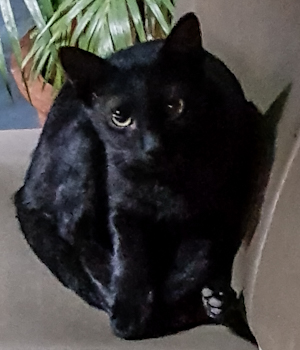 I love cats. I have only ever ‘owned’ one. I named it Crumpet.

I was less than ten years old when Crumpet entered my life. I was lying in bed at home, recovering from a bout of tonsillitis, when my late mother brought Crumpet into my bedroom. She had only just bought the cat at a pet shop to cheer me up.

My mother, who was always nervous about me risking injury, would not allow me to open the tins of cat food that Crumpet enjoyed. She was concerned that I might cut myself on the sharp edges of the open tin lids. So, as my mother did not want to disturb my father, who did much of his academic work at home, she became responsible for feeding Crumpet.

Cats tend to be quite self oriented. They favour the people who feed them. In Crumpet’s case, it was my mother who received much of the cat’s attention. Our cat used to rub herself against my mother’s legs affectionately, especially when my mother was opening the cat food.

Now, here’s the rub. My self sacrifying mother could not bear cats. She put up with Crumpet for my sake.

Crumpet must have realised that my mother was not keen on her because after a few weeks our pussy abandoned our home for another about one hundred yards away from ours.

Since Crumpet deserted us, I have never kept another pet, but my fondness for cats has remained.

take rest when you can,

life is for lounging: enjoy!