TODAY, WE SENT some books from Kolkata to Bengaluru (Bangalore) to lighten our luggage because domestic flights in India restrict the amount of baggage one can carry. The process reminded me of sending books from other countries.

I used to visit Yugoslavia a lot when it still existed. One one occasion, I wanted to send some heavy books from Belgrade to London. I went to a large centrally located post office. Within the building there was a counter for wrapping parcels. For book post, the books had to be wrapped a certain way. They had to be packed so that a part of each book was left uncovered. This was so that the customs and postal people could see that it was books that were being dispatched.

In 1984, I visited Yugoslavia’s neighbour Albania, which was then under the strict Stalinist dictatorship headed by Enver Hoxha. We had to travel through Yugoslavia to reach and leave Albania. I had read that books from Albania would be confiscated by the Yugoslav customs, and that it was best to post any books bought in Albania back to the UK. In anticipation of this and following the advice that parcel wrapping materials were not available in Albania, I brought brown wrapping paper, adhesive tape, and string from home.

I bought several books in Albania and wrapped them up with the materials I had brought from England. Along with a fellow traveller, an Australian post office official, I took the parcels to a post office in central Tirana. The parcels were weighed by a person at a counter, and he handed me the right amount of stamps for each package. After affixing the stamps, I handed the parcels to the Albanian post office worker. He examined them, then tore off one of the stamps before rapidly reapplying it. I had inadvertently stuck on the stamp upside down. As he restuck the stamp, which bore an image of Albania’s fictator, he said “Enver Hoxha “. Apparently, sticking him upside down was considerable disrespectful. My Australian companion was horrified. He exclaimed:
“Removing postage stamps from mail is against international postal regulations. He shouldn’t have done that.”

Today, in Kolkata, we took our books to a post office in Park Street. Pn ots steps, there are several men who wrap and label parcels to be posted. One of them took our books, wrapped them in cloth bags, and then in a strong plastic sheet, which he carefully sewed up with a beedle and thick thread. This was then wrapped in another layer of plastic, sealed with tape. Upon this he wrote the address to which it was being sent, and our address in Kolkata. Then the whole thing was wrapped in tough transparent plastic to protect the parcel from adverse weather conditions. After this, he carried to parcel to the correct counter, where we paid the postage: about £2.75 for 8 kilograms. The wrapper’s charge was less than £1.

The books I sent from Yugoslavia and Albania arrived safely. So have other parcels I have sent by post from one Indian city to another. So, I am reasonably optimistic that our 8 Kg packet will arrive ‘in good nick’. 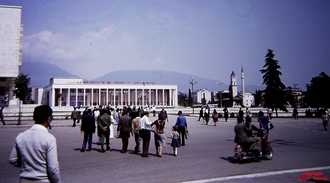 Recently, I read a blog (Click here) written by an Australian, who has visited North Korea twice. On one of his trips, he visited a museum or exhibition of postage stamps, many of which depict important leaders of the country. Given that it is against the law to deface pictures of these people, he wondered how careful postal officials would have to be when they cancel the stamps with the rubber stamps used for franking. One false move and the great leder’s face might become defaced. In that case, the postal official would risk punishment. This story reminded me of something that I observed in an Albanian post office when I was visting Albania in 1984. In those days, Albania was even more isolated from the outside world than North Korea and it was governed by a stern, repressive regime led by the dictator Enver Hoxha.

This excerpt from my book  Albania on my Mind describes what I saw:

“I wrapped my books into a number of parcels, addressed them, and then began leaving the hotel to visit Tirana’s main post office. The Australian, who was travelling with us, spotted me in the lobby and asked me what I was doing. When I told him, he askedwhether he could accompany me to the post office, as he,working as he did for the Australian postal service, was curious to see how things were done by the Albanian post…

… The clerk behind the counter in the Tirana post office offered no objection to the way that I had packed my parcels. He weighed them and then gave me numerous stamps to stick on them. I stuck them on and returned the parcels one by one. The clerk examined each of them to make sure that I had stuck the right combination of stamps on each packet.

Suddenly, he stopped, looked up at me, then at the parcel, before pointing at one of the stamps. In my haste, I had stuck it on upside down. He tore the stamp off the
parcel, and then replaced it the right way up, pointing at the portrait on it whilst saying:
“Enver Hoxha.”
The Australian, who was watching this with wide-open eyes,
turned to me and said:
“You know, it’s completely illegal to remove stamps from postage. It’s against all international postal rules.”

I did not know what to say, but admired the respect that even a humble postage stamp could inspire in one of Enver’s subjects.”

ALBANIA ON MY MIND

on Amazon by clicking   HERE