IT RHYMES WITH FRECKLES

THE HELPFUL FEMALE voice with a North American accent emitting from our mobile ‘phone was quite persistent in trying to direct us onto the A47 road, the most direct route from Swaffham to Norwich, but we chose to ignore the advice we were being given. Instead, we forced ‘her’ to change her instructions so that we could follow a far longer but more pleasant route via Watton and Old Buckenham. As we wound our way between the two last mentioned places, we spotted a church with a round tower, made with flint and mortar, topped with a newer octagonal structure. This was in a Norfolk village that rhymes with freckles: Breckles. The church is St Margarets in the parish of Stow Bedon.

Churches with round towers are a rare breed in England compared with those with square towers. There are only 186 of the rounded versions (www.roundtowers.org.uk/) and some of them are in ruins. Of all the examples of this kind of church, the greatest number can be found in East Anglia, 131 of them in Norfolk.  Church towers were built to house bells and sometimes the items used in services (e.g., church vessels). It is unlikely that they were built as part of the country’s defence against invaders because many of them were built after the last invasion of England (www.roundtowers.org.uk/about-round-tower-churches/).

But why were so many churches with round towers built in East Anglia and relatively few elsewhere? The following (from https://historyhouse.co.uk/articles/round_tower_churches.html) provides one possible answer:

“It has been suggested that the main reason was the lack of suitable local building material. Square towers require strong stone cut and dressed into blocks at each of the corners. But there is no suitable stone to be found in East Anglia and to transport stone from another county was very expensive for a small parish.

The only locally available stone was flint. Flint is a small, knobbly stone which, although creates strong walls when set in mortar, is not suitable for tower corners.”

The round tower of St Margarets was built in the 11th century (https://historicengland.org.uk/listing/the-list/list-entry/1248441), so could have been constructed either before or after 1066, when the Normans invaded. The octagonal structure on the top of the tower, the belfry, is late 15th century (www.norfolkchurches.co.uk/breckles/breckles.htm).  Restored in 1856, the nave and chancel were constructed in the 15th and 14th centuries, respectively.

The interior of St Margaret’s is attractively simple. The carved, probably highly restored,  wooden rood screen, separating the nave from the chancel, is one of the few decorative features in this small church. However, for me, the greatest attraction is the carved stone font, which is decorated with patterns and four carved figures standing in archways. The latter are carved in a simple, almost naïve or unsophisticated style, which made me wonder whether they date to pre-Norman times. Various sources describe it as being Norman.  Whatever it is, it is a lovely piece of carving. When we saw it, it was decorated with flowers and foliage as part of the church’s preparations for celebrating the harvest season.

Having seen this charming church, we were pleased that we did not obey the voice on our GPS app, but instead took a route that our electronic navigator was initially so dead against. The more round about route allowed us to find a lovely church with a round tower.

ROMANS TRAVELLING ON the ancient Dere Street, a road constructed by the Romans, between York and Hadrian’s Wall crossed the river Ure near the present Yorkshire village of Aldborough, which archaeological research has revealed stands on the site of a large Roman town called ‘Isurium Brigantum’. Some of the Roman remains can be seen at the beautifully laid out English Heritage site in Aldborough. The parish church in Aldborough is built on the site of the forum of the former Roman town and contains a Roman sculpture, which might well depict the god Mercury. Excavations, which we viewed, being undertaken by archaeologists from Cambridge University are discovering that the Roman town was an important way station for supplying and servicing troops travelling to and from Hadrian’s Wall. The archaeologists, who kindly showed us around their dig,  asked us not to reveal what they have discovered because they have yet to be published in the appropriate way.

After crossing the Ure at Aldborough, Dere Street, so named after the Romans had departed from Britain, travelled north to Catterick (Roman: ‘Cataractonium’). A few miles from Aldborough, the old road used by the Romans passed close to the Yorkshire village of Kirby Hill, whose parish church, All Saints, perches on the summit of a hill. It is possible that the church is sited where once there was a Celtic and/or Roman shrine. The church’s informative website (www.allsaintskirbyhill.org.uk/) reveals:

“… there are some large stones in the lower walling; one of these at the South West angle is clearly Roman and has a sunk panel, which once contained a 13 line inscription. Unfortunately, it is now very badly weathered. It was a posthumous dedication to either Antonins Pius or Caracalla, the first such recorded from Roman Britain.”

Unfortunately, when we visited this lovely church recently, we missed seeing this interesting souvenir of the Roman occupation of Britain. However, during our brief look inside the church we did see evidence of some of the invaders who arrived in Britain after the Romans had left.

The nave of All Saints was built both during the Saxon and Norman eras. Its structure includes some Saxon slabs as well as those placed after the Norman invasion in 1066. A north aisle was added in about 1160 and is separated from the older part of the church by semi-circular masonry arcades supported by sturdy stone pillars topped with capitals dating back to Norman times.

The church, which we only visited because we followed a roadside direction sign with the words “Ancient Church”, contains many other interesting features, which we did not have time to examine as we were in a bit of a hurry to reach an appointment on time. When we told a lady, who was telling us about the church, that we were rather pressed for time, she said to us, smiling:

“That’s a pity. You’re speaking with the wrong person. You can’t expect someone from Yorkshire to be brief.” 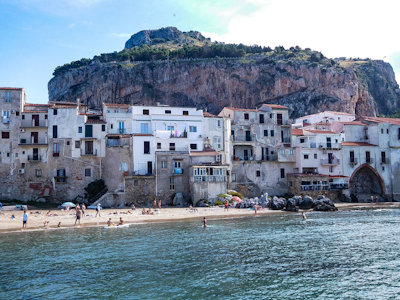 The timeless Mediterranean washes the shores of an ancient land, Sicily.

Here in Cefalu, the Normans built a magnificent cathedral after taking over the island from its Arab rulers.

Sicily has been invaded many times, each invasion adding to the variety of culture and traditions on this piece of land that separates the western part of the Mediterranean from the eastern part. 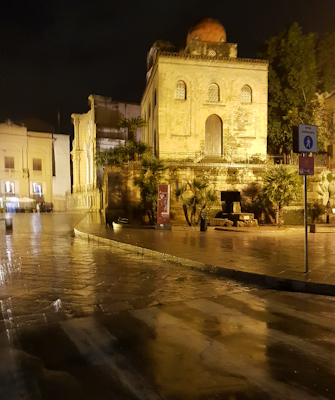 Moorish influence in Sicilian church architecture of the Norman era can be explained by the presence of Moorish craftsmen in Norman Sicily.