Give it a wide miss 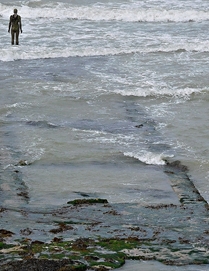 At first sight, I thought I saw a man standing alone and naked out in the waves at Margate on a sunny but very windy afternoon. Crazy, I thought to brave those rollers on suchb a cold day and without a wet suit. Then, I noticed that he was coloureed green and motionless despite the battering he was getting from the sea. He was not a man, but a sculpture.

This sculpture braving the sea is Another Time  created in 2013 by the British sculptor Antony Gormley (born 1950).

The clever thing about this sculpture is placing it in the water. Though static, the waves dashing against it can create the illusion that the sculpted man is moving. Also, by putting it in the sea, the whole sea becomes an important part of the artwork.

Although I am not too keen on Gormley’s art works, this piece at Margate, just outside the Turner Contemporary art gallery satisfies me greatly.

You can now see the sculpture and the waves in this short video:  http://www.ipernity.com/doc/adam/48815810 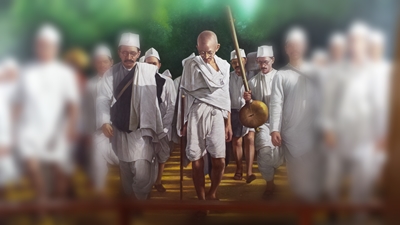 On the 24th of December 1940 Mohandas Gandhi (the ‘Mahatma’) wrote to the Chancellor of Germany, Adolf Hitler. Amongst other things that he wrote in his letter, the following extracts suffice to give the gist of it:

“I hope you will have the time and desire to know how a good portion of humanity who have view living under the influence of that doctrine of universal friendship view your action. We have no doubt about your bravery or devotion to your fatherland, nor do we believe that you are the monster described by your opponents. But your own writings and pronouncements and those of your friends and admirers leave no room for doubt that many of your acts are monstrous and unbecoming of human dignity, especially in the estimation of men like me who believe in universal friendliness. Such are your humiliation of Czechoslovakia, the rape of Poland and the swallowing of Denmark. I am aware that your view of life regards such spoliations as virtuous acts. But we have been taught from childhood to regard them as acts degrading humanity. Hence we cannot possibly wish success to your arms.

But ours is a unique position. We resist British Imperialism no less than Nazism. If there is a difference, it is in degree. One-fifth of the human race has been brought under the British heel by means that will not bear scrutiny. Our resistance to it does not mean harm to the British people. We seek to convert them, not to defeat them on the battle-field. Ours is an unarmed revolt against the British rule. But whether we convert them or not, we are determined to make their rule impossible by non-violent non-co-operation…

…During this season when the hearts of the peoples of Europe yearn for peace, we have suspended even our own peaceful struggle. Is it too much to ask you to make an effort for peace during a time which may mean nothing to you personally but which must mean much to the millions of Europeans whose dumb cry for peace I hear, for my ears are attended to hearing the dumb millions? I had intended to address a joint appeal to you and Signor Mussolini, whom I had the privilege of meeting when I was in Rome during my visit to England as a delegate to the Round Table Conference. I hope that he will take this as addressed to him also with the necessary changes.” (see: https://www.mkgandhi.org/letters/hitler_ltr1.htm).

I do not think that this unbelievable letter ever reached the Führer. However, it formed the basis for a film, which was on general release in India briefly.

In 2011, an Indian film, “Gandhi to Hitler”, was put out on general release in India. One newspaper accorded it a rating of half a star out of five. We were staying in Bangalore when it was showing, and I was dying to see a film whose name juxtaposed the peace-loving Gandhi with the war-mongering Adolf Hitler.

Only one cinema was showing the film in Bangalore. It was a long way from where we were staying. We arrived for the 10 am performance and joined a long queue of school-aged children waiting at the box office of the cinema multiplex. When we reached the ticket office, I said to the ticket seller:

“Two for the Gandhi/Hitler film.”

“Not possible, sir,” came the reply.

“I must sell three tickets before we can screen a film, and you are only two.”

“But,” I protested, “we have come all the way from London to see this film.”

I thought for a moment, and then said:

“Sell me three tickets, and then you can screen the film.”

The seller was happy with this. We walked over to the lift that would take us up to the cinema. While we were waiting, the ticket man came rushing up to us, waving one of the notes with which we had paid for our tickets. He had managed to find a third taker for the film and refunded our third ticket.

Apart from an usher, there were only three of us in the large auditorium. The film was so dreadful that it was quite amusing. The plot had three main strands that ran in parallel. The first was Gandhi and his followers walking endlessly around a lovely garden. One of the followers was the wife of a man, who appears in the second strand. This aspect of the plot revolved around a group of Indian soldiers who had joined the German Army but were trying to desert from it. For those who are unaware of it, some Indian soldiers did actually join the Wehrmacht during WW2, hoping that a German defeat of the British might hasten the independence of India. Throughout the film, this forlorn band of soldiers trudged through a snowy mountainous landscape that was supposed to be the Alps but looked more like the Himalayas. Somehow, quite inexplicably, the woman in India was able to correspond by letters with the soldier tramping through the ‘Alps’.

The third strand of the film, which had no obvious connection with the other two strands, was set in Hitler’s bunker in Berlin during the last days of the Third Reich. Anyone who has watched the excellent film “Downfall” (2004) would be able to see that the bunker in the Indian film is a very crude copy of that in the German film. Unlike Adolf Hitler, the man portraying him in the Indian film is a true Aryan, an Indian. Goebbels is played by a character who looks like an elegant Italian. The Indian Hitler kept forgetting which of his arms was supposed to be lame.

There was an interval half way through the film. We left the auditorium to stretch our legs. When we returned for the second half of the film, my wife and I were the only people left in the auditorium.