THE PADDINGTON ARM of the Grand Union Canal connects Paddington Basin to Bull’s Bridge at Hayes. It was opened in 1801 and was an important transport route before the growth of railway usage in England. Today, it is used mainly for leisure. People enjoy walking, running, and cycling along its well-maintained towpaths. Others keep long canal boats, known as ‘narrow boats, on the water. Some live in these vessels, others use them to move slowly through Britain’s antique but still usable canal network.

During my teens, I used to explore London with three good friends and an excellent guidebook to London’s quirkier sights, “Nairn’s London” written by Ian Nairn. We walked along the banks of the River Thames, which were undeveloped and somewhat sinister in the late 1960s. In those days, there were stretches of riverside that had barely altered since the era of Charles Dickens.  Nowadays, there are few if any stretches of the Thames in London, which have not been made ‘visitor friendly’.

One day, the four of us decided to walk along the Grand Union Canal, starting our exploration at Camden Lock, now a crowded, popular tourist area. We followed the Regents Canal to the point where it enters the Maida Vale Tunnel, and then re-joined it where it emerged. From Little Venice, we continued westward along the Paddington Arm. For most of the way, we saw nobody else on the towpath. As we headed further west, the canal began running through a dreary semi-industrial neighbourhood. Just before we reached the road bridge that carries Ladbroke Grove over the canal, we saw a gang of young men in leather jackets, who looked at us menacingly. They were busy throwing a motorcycle into the canal. We did not like the look of them and decided that we had seen enough of the canal.

Years later, we joined other friends on a boat trip that began at Camden Lock and continued along the canal to Greenford, a suburb in the far west of London. The trip was very picturesque as far as Ladbroke Grove, but the remaining long stretch was less exciting. West of Ladbroke Grove, the canal winds past industrial buildings and the gardens at the back of residential houses. Later, we accompanied the same friends on a boat trip that took us east from Camden Lock. This was a far more interesting ride as its route includes many fascinating built-up urban areas of east London, which have a richer history than the suburbs of west London. It included a visit to the Olympic Games park that was being constructed at the time.

Today, my wife and I re-visited the Paddington Arm, walking the short stretch between the Harrow Road bridge and the point where, long ago, my friends and I saw the young men throwing a motorbike into the water. We did not see anything like that but had to contend with the almost continuous stream of cyclists sharing the towpath. Most of them were courteous, but a few inconsiderate wildly pedalling folk seemed to think that they were taking part in the Tour de France. Given that it was a Sunday afternoon, it was not too busy to make walking along the towpath anything but enjoyable. 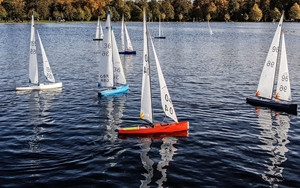 At first glance, you might be confused. The water of the Round Pond in London’s Kensington Gardens is crowded with sailing boats that are little bigger than the swans sailing amongst them. No, it is not your eyesight failing, but you are watching miniature sailing boats that are guided from the shore by ageing men holding remote control radio transmitters. And, it is likely to be a Sunday that you are seeing this.

The boats belong to the London Model Yacht Club (‘LMYC’), which was established in 1876 and renamed in 1884. It is the oldest model yacht club in the UK. Its ‘ancestry’ and full history may be read HERE.  It seems that the Round Pond began to be used for its activities from by the late 1880s.

Sunday meetings begin at 10.30 am, and there are frequent racing events, which the members take very seriously. For those who know about boats, currently the Club favours: “Radio Controlled 10-Raters, International OneMetres, DragonFlite95s, and Vintage Model Yachts“.

Whether or not you are a fan of boating (model or full-size), it is well worth seeing this example of English originality in Kensington Gardens one Sunday morning. I often wonder what, if anything, the swans make of this peculiar activity.