IN THE EARLY 1980s, I travelled to the island of Mljet, which is off the Dalmatian coast of what was then Yugoslavia. It was notable for at least two features. One was that most of the island was out of bounds to motorised traffic. The other was that nudism was both tolerated and encouraged.

I had been introduced to nude bathing a year or two earlier when I visited Dubrovnik with some friends from Belgrade. We used to take a ferry from the city to the nearby island of Lokrum. At the island’s ferry station there was a sign. One arrow pointed to the ‘nudismo’ beach and the other to the ‘ne nudismo’ beach. The first time we headed for the nudismo beach, I expressed concern about my modesty. One of my Yugoslav friends told me:

“Don’t worry, there’s always someone on the beach who looks worse than you.”

Surprisingly, these words reassured me.

Our party on Mljet included four people from the British Isles, including me, and three Yugoslavs. One of us Brits and the Yugoslavs were well-versed in nude bathing, but two of us ‘Brits’, including me. were relative novices.

Recently, my wife and I visited the gardens of Anglesey Abbey in Cambridgeshire. This lovely place is home to several outdoor sculptures. One of these is a naked youth carved in white stone. Someone, most probably a visitor, had placed a pair of sunglasses on the sculpture, rendering the youth no longer fully nude. Seeing this reminded me of our holiday in Mljet.

My friend from London and I joined in the nudity that was expected on Mljet, maybe a little anxiously at first but we soon got to enjoy it. After a few days on the island, one of my Yugoslav friends pointed out that unlike the rest of our party, neither of us ‘novices’ were ever completely nude. Either we wore only a sun hat, or a wristwatch, or even just a pair of sunglasses like the statue at Anglesey Abbey.

It is odd what can trigger far-off memories. That statue with the sunglasses did manage to remind me of the wonderful times I spent in Yugoslavia, a country that no longer exists.

MY ONLY VISIT TO CYPRUS was in 1960. I was eight years old and Cyprus was all one country. We went to Kyrenia, where my father was attending a conference in the town’s best hotel, the centrally Dome Hotel. We were all put up there.

It was not my father’s first visit to Cyprus. He had gone out there for a week in the early 1950s to give advice to a large Greek industrial firm based there. When he arrived at the airport in Nicosia,  the immigration officials threatened to forbid him from entering Cyprus because he did not have a yellow fever certificate.  The company for whom he was going to work had sent people to meet Dad. Not wanting to waste my father’s time and the company’s money, the officials assured them that they would make sure they would get my father vaccinated during his stay.

After a week, it was time for my father to leave. As he had not received the yellow fever ‘jab’, he asked his hosts about it.  He was told:

“Don’t worry, we sent someone from the company to be injected instead of you. We didn’t want you to waste your time.”

By 1960, the yellow fever certificate was no longer required to enter Cyprus.  We flew from London to Athens. As we stepped out of the cool aircraft onto the steps leading down to the tarmac, my face was hit by a blast of very hot air. I thought that this was being emitted by the aircraft engines. It was not. It was that never before had I stepped out of an air-conditioned space into outside air with a temperature over 30 Celsius.

We stayed in Athens a few days before flying to Nicosia. It was the beginning of the Greek Easter weekend when my mother realised she had left our travellers cheques in a small shop, which had closed by the time she discovered the loss. We went to a police station to report the problem. After taking many details including the names of her four grandparents,  they recorded the loss, but did little else.

My recollections of Cyprus are but few. The Dome Hotel had a swimming pool, which none of us used. Instead, we took trips to Six Mile Beach outside Kyrenia. This was a stretch of sand that looked idyllic at first sight. However, very soon after arriving, our would be covered with small specks of sticky black tar. Thinking back on this, I am surprised that we kept on returning to that beach.

Of the food we ate, I remember little except that we ate a surplus of thick stemmed richly flavoured spring onions (scallions).

My mother found a shoemaker in Kyrenia. She ordered a pair of sandals. This required daily,  lengthy visits to the craftsman. She was quite demanding and expected perfection. I suppose that there were many adjustments she wanted before she was satisfied. I enjoyed the visits to the cobbler because he listened to a radio station, which broadcasted a children’s programme in English.

We made several car trips from Kyrenia. At least twice, we drove along a winding mountain road to Nicosia. It took well over an hour each way back in 1960. We also took a trip  to visit the picturesque ruins of the 13th century Bellapais Abbey.  Although it is only just over 3 miles from Kyrenia, the roads were so poor in 1960 that this journey proved to be quite lengthy, as was an excursion to an archaeological site near Famagusta.

From Nicosia,  we returned to Athens, where we spent a few more days. Before leaving London, I had learnt about Archimedes and his legendary bath in which he is supposed to have been inspired to derive is principle of buoyancy. I was convinced that this famous bath was in Athens. I managed to persuade my parents to hire a taxi to drive around Athens in search of the bath.

Having explained to our taxi driver the nature of our quest, he gamely drove us around the city, stopping frequently to ask locals whether they knew where we could find the bath. Eventually, the driver revealed that he was Jewish. When he discovered that we were his coreligionists, he took us not to see the bath of Archimedes but, instead, to his synagogue. Some years later, I  discovered that our quest had been in vain because, if this bath ever existed, it was likely to be in Syracuse in Sicily.

Fifteen years following our stay in Kyrenia,  Cyprus became divided into two parts: one governed by a Greek administration and the other became governed by Turkish administration.  Kyrenia, where we stayed, is now in the Turkish part of Cyprus and is called Girne. The Dome Hotel still welcomes guests. Maybe, one day after the air is clear of coronavirus particles, I will revisit Cyprus and that hotel. 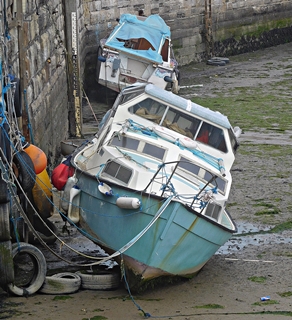 The tide is far out

Fishing boats rest on the strand