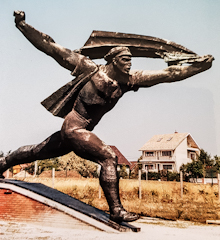 REGIMES RISE AND FALL, as was the case of the Roman, Ottoman, and British empires. Each has left a physical legacy in the form of buildings, works of art, and a plethora of monuments. In India, a part of the both the former Mughal and British Empires, visitors flock to see their tangible remains.

In the late 1980’s, it was turn of the Soviet Empire to decline and fall. In many of its former ‘colonies’, its citizens hastily tried to erase its physical traces. Statues were toppled and monuments destroyed. Some of these artefacts were removed from public view by governmental authorities (maybe because they feared a possible return of Russian domination?)

For good or evil, the Soviet Empire has had a profound influence on what followed in its wake. Whatever one thinks about the Soviet Empire, it has become a significant part of 20th century history and it is a shame to try to erase memory of it. This was also the opinion of the Hungarian architect Ákos Eliőd, who designed the Szoborpark (Memento Park) in the countryside near Budapest.

The Szoborpark opened to the public in 1993. About 6 years later, we drove to Hungary from London. We stayed with a good friend of ours, Ákos, a pioneer of Hungarian rock music, and his family in his home in the outskirts of the hilly Buda section of Budapest. It was Ákos who alerted us to the existence of the Szoborpark.

One sunny day, we drove to the park. It was a wonderful place containing a collection of the Soviet era statues and monuments gathered from all over Hungary. It was/is a treasure trove for those who like or are fascinated by socialist realism art forms, an aesthetic that I like. We spent a couple of enthralling hours in the hot sun, wandering about this open air exhibition.

I took many photographs of the Szoborpark, which I have ‘unearthed’ recently. One of them is of wall plaque celebrating Béla Kun (1886-1938) son of Samu Kohn, a non obervant Jewish lawyer. He was the dictator of a short-lived communist regime that terrorised Hungary for a few months in 1919. With its downfall, Kun fled to the USSR, where he organised the Red Terror campaign in the Crimea in 1921. He was executed in 1938, a victim of Stalin’s anti-Trotskyist purges.

Many years after seeing the Szoborpark, my wife and I visited Albania in 2016, more than 3 decades after the downfall of its highly repressive Marxist-Leninist regime piloted for 40 years by its dictator Enver Hoxha.
Interestingly, all over the country there were still numerous monuments erected during the dictatorial era. Many of them were in need of tidying up or cleaning, but they were still there despite being daily reminders of what was a difficult and fearful time for most Albanian citizens.

We believed that the endurance of these monuments erected during difficult times was due to at least two factors. One of these is that many of them were put up to celebrate heroic feats of Albanians carried out against their German invaders during WW2. The other is that despite Hoxha’s repressive regime, many things were done to move Albania from being a Balkan backwater in the former Ottoman Empire to getting nearer to being a 20th century European state.

This is not to say that statues of Enver Hoxha, Lenin, Marx, and Stalin (the mentor and hero of Enver Hoxha) were not pulled down in Albania. They were, but fortunately a few have been preserved by an art gallery in the country’s capital Tirana.

In countries like Hungary and the former Czechoslovakia, the arrival of the Soviet Army and the Russian domination of their countries was not felt by most citizens to have been even remotely beneficial. Obliteration of memories of this era were not surprising in places like these.

To conclude, I am glad that I have neither lost nor obliterated the photographs I took at the Szoborpark so many years ago.