THE OLD WELLS AND CAMPDEN Wash Houses stand on an elevated section of Hampstead’s Flask Walk and overlook a distinguished-looking detached house standing in its grounds surrounded by walls at the eastern end of Flask Walk. Entered through an unusual double set of wrought iron gates, this is Gardnor House, which was built in 1736. The doubling of the gates has happened since the 1960s, during which time it was a single gate (see image at: https://images.historicenglandservices.org.uk/historic-images/1960-present-day/gardnor-house-hampstead-aa071908-1339539.html)

The house was built for the successful upholsterer Thomas Gardnor (c1685-1775) opposite the stocks that were used for punishment until 1831 (Barratt, T: “The Annals of Hampstead). He and his family were responsible for the development of several streets and buildings in Hampstead (www.british-history.ac.uk/vch/middx/vol9/pp15-33). Thomas was responsible for building terraces of houses in Flask Walk and homes in what is now Gardnor’s Place. His family also:

“…enlarged their property holdings in the area to include Flask Walk, Streatley Place and parts of Heath Street, High Street and New End. The family also owned houses in Church Row on the site of Gardnor Mansions.” (https://en.wikipedia.org/wiki/Thomas_Gardnor).

In addition to his property interests, Thomas was made a trustee of the Hampstead Wells Charity, which aided the local poor, in 1761 (Barratt, T). Gardnor is believed to have died of smallpox (https://historicengland.org.uk/listing/the-list/list-entry/1067366) and was buried in the graveyard of Hampstead Parish Church, where his tomb may still be seen.

During the mid-19th century, Gardnor House was owned by a dealer in chinaware. Later that century, by which time most of the area around Flask Walk was inhabited by poor people, the grand Gardnor House was the home of an architect. Moving forward 100 years, we find that Gardnor House was the home of the authors Kingsley Amis (1922-1995) and Elizabeth Jane Howard (1923-2014). By the time they moved in, their marriage was crumbling as Joseph Conolly, owner of the former Flask Bookshop in Flask Walk, recalled (https://thecritic.co.uk/issues/november-2020/very-amis-very-hampstead/):

“…by the time they were settled in Gardnor House in Flask Walk — also Georgian, though rather smaller and with a modest garden — the gilt was beginning to chip away from the golden couple, and that deterioration was about to accelerate rather rapidly.”

The house that Thomas Gardnor built for himself is one of the larger residences within the bounds of old Hampstead. It is either evidence of his success as an upholsterer and/or as a property developer. Luckily, the house seems to be well-maintained. Many of us, who spent our childhood in or near Hampstead, bemoan it having become a more upmarket area than it used to be, but with its property values rising, the condition of many historic buildings is being well-maintained.

THE GRAND UNION CANAL and its shorter branches link London with Birmingham and other places in the Midlands. For much of its course, it runs vaguely parallel to the route of the M1 motorway, possibly one of the least attractive highways in England. Unlike the motorway, the canal winds its way through picturesque countryside for much of its course. Starting at Brentford (Middlesex) on the River Thames, the canal and the River Brent follow the same course, but they part company at The Fox pub at Hanwell, about two miles (as the crow flies) from the old iron bridge, which carries Brentford High Street over the River Brent. Moving north along the canal from this bifurcation, we soon arrived at something that we did not know about until we walked there with our dear friends from Richmond, who have introduced us to many other fascinating places, which were also new to us.

The bifurcation is about 34 feet above sea-level. From that point, the canal’s route curves leftward changing its direction from northwest to southwest, and in so doing it reaches land that is 86 feet above sea level. This curve is about 700 yards in length. To be able to move vessels between these two altitudes, there is a series of six hand-operated locks, known collectively as the Hanwell Lock Flight, an impressive sight. Each of the six locks enables a craft to negotiate about nine feet of the change in altitude.  This is slightly less than the deepest lock on the Grand Union Canal system, which is 11 feet and one inch at Denham Deep Lock.

An old wall, now a protected historical structure, to the east of much of this flight of locks separates the grounds of the former County Lunatic Asylum (‘Hanwell Asylum’) from the canal and its towpath. The wall, formerly that of the Lunatic Asylum, then that of St Bernard’s Hospital, and now that of Ealing Hospital, was probably built in the 1830s (https://historicengland.org.uk/listing/the-list/list-entry/1001963). As for the locks, they must have been constructed at the same time as the canal, that is between 1793, when its construction was authorised and 1805, when the section between Brentford and Braunston (in Oxfordshire) was completed. The work on the canal was supervised by William Jessup (1745-1814), who was the Chief Engineer, and James Barnes (c1740-1819), the Resident Engineer. Each lock is separated by a widened part of the canal, a pool where boats could wait before using the next lock on their journey. The pools have small ramps that were used to lead towing horses from the water if they fell into it accidentally as often happened, when they tripped on the towing ropes of barges awaiting the locks.

The wall of the former asylum has small blocked up rectangular openings a few inches above the towpath. These were designed to be opened if the asylum caught fire. Water taken from the canal could then be pumped through these holes and into the asylum precincts. Between Locks numbers 94 and 95, the pool widens slightly next to the wall of the former asylum.  The wall has a blocked-up archway, which used to be an entrance to the asylum. Old maps show that this archway led to a small quare dock within the walls of the asylum. The north and east sides of this dock were flanked with the asylum’s mortuary building. To the west of this, there was a burial ground. The dock was used to unload supplies, mainly coal, to the asylum. The asylum grew most of its own food, and any surplus that it produced was loaded on to barges at the dock.

Hanwell Asylum was the first such county establishment to be opened in the county of Middlesex. The second was the better-known one at Colney Hatch (at Friern Barnet), which was opened in 1850. Writing in 1876 in his “Handbook to the Environs of London”, James Thorne describes that the inmates of the asylum were treated in ways far better than they might have been in other such places then and earlier. He wrote that the 1100 women and 650 men confined there ‘enjoyed’ a:

“…a system of entire ‘freedom from restraint on the part of the patients, ample occupation, amusement, and absence of seclusion; with constant kindness of manner and sleepless vigilance on the part of the attendants, and unceasing watchfulness by the superiors’, a system now happily established in all our larger asylums.”

These improvements were introduced under the management of the psychiatrist Dr John Conolly (1794-1866), who qualified in medicine at the University of Edinburgh in 1821. In 1828, he was appointed Professor of medical practice at the recently established University College in London (now ‘UCL’). Two years later, he published a book, “Indications of Insanity”, and in 1839 he became Resident Physician at the Hanwell Asylum. There, he introduced the practice of not restraining patients suffering with what was then known as ‘insanity’. Although he was not the first to do this, his actions ensured that humane methods of treatment including ‘non-restraint’ became accepted practice all over the country. In 1856, Conolly published a book on this subject, “The Treatment of the Insane without Mechanical Restraints”. Despite this, the patients were locked into the asylum beside the locks.

In 1929, the asylum was renamed as ‘St Bernard’s Hospital’, which it remained until the mid-1970s, when the government redeveloped the site to become part of Ealing Hospital. The former Victorian asylum buildings have become the Ealing Hospital, St. Bernard’s Wing, for psychiatric patients.

We walked along the Grand Union Canal/River Brent towpath from Brentford to the Hanwell Lock Flight, just over three miles. At times, the waterway passes so close to the M4 motorway that you can almost touch the traffic roaring past, yet even when this and modern buildings are nearby, the canal runs along a lovely corridor of greenery, where the occasional water fowl such as ducks, coots, cormorants, swans, and heron can be spotted. As you walk along, it is sometimes difficult to believe that you are winding your way through the sea of suburbia that spreads in all directions from the edges of central London. Once again, I am indebted to our friends from Richmond for opening our eyes to yet more of London’s delightful surprises.

We made our walk during the last week of the November 2020 covid19 ‘lockdown’. On reflection, it seems appropriate that our perambulation took us past locks and a place where unfortunates with mental disorders were once locked-up, or should one say ‘locked-down’?

The shadow on the wall

At your own risk, boldly:

Maybe you will regret it

Some years ago, some youngsters were messing around on their motorbikes late at night on the empty Old Airport Road that passes several military compounds. When they were stopped by the police, they dismounted and scattered in all directions. One youngster leapt over a wall and into the garden of the local commander’s bungalow. When challenged by a guard, he kept running. The guard shot him dead. 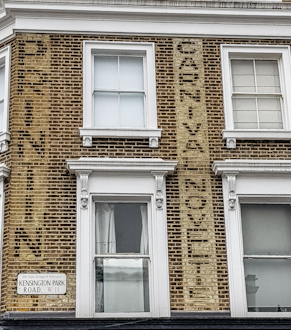 Fading letters on a wall:

Of times long ago

Arms and the man,

The hunting is over,

Only a dry skull remains