I have just noticed that so far 900 people are following my blogs.

I wish to express my gratitude to you all for taking an appreciative interest in what I write.

Thank you very much and please do spread the good word about my website.

This is just a little ‘thank you’ to everyone who follows my blog and/or reads it.

Your many comments are welcome and much appreciated.

Dear readers of my blog,

I really appreciate the interest that so many people are taking in my random jottings on this blog of mine. This is just a brief note to thank you all, and to encourage you to ask your friends to read and possibly also follow my postings. The comments I receive are gratefully accepted and a pleasure to read. So, don’t be shy: please tell me what you think about my writing.

Thank you all, my good readers! Enjoy what I have written already and what I will write in the future.

All the very best

I love receiving gifts. I love giving gifts especially if the recipient expresses joy, rather than gratitude.

This photograph taken in the Khanderao Market in Vadodara (India) expresses the joy of giving, which, as in the case of this flower merchant, can be greater than the joy of receiving. 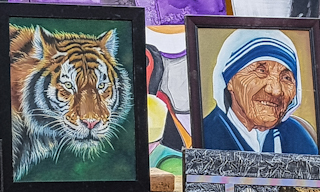 When I was young in the early 1960s, if something was wonderful, we would have said it was “super”. Later, something super was described as “fab”. Moving closer to the present, something fab became described as “wicked”. Now, something wicked has become “awesome”, an overused word which I do not consider to be super in any way. In fact, it is used so much that I regard it as being wicked in the old sense of that word.

“THANK YOU SO MUCH” is also currently in frequent use. Call me a “fuddy duddy” if you wish, but I have problems with this expression. I have no difficulty with people expressing gratitude, but how much is “so much”? What is wrong with just “thanks” or “Thank you very much”?

So many people say “thank you so much”,

do they truly mean?