BEFORE THE COVID19 PANDEMIC gripped the world, many Londoners made outings to pleasure grounds such as Legoland, Thorpe Park, and further afield to Disneyland near Paris. During the late 18th century, Londoners seeking entertainment headed for places such as Vauxhall Gardens, Ranelagh (now, the grounds of Royal Hospital Chelsea, site of the Chelsea Flower Show), and Cuper’s (across the Thames opposite Somerset House). These pleasure gardens began to decline, some before and others during the 19th century. However, in their wake, another such place came into existence in Chelsea, Cremorne Gardens.

Thomas Dawson, 1st Viscount Cremorne (1725-1813), an Irish landowner, possessed a plot of land on the north side of the Thames, just west of Battersea Bridge. There he had a mansion, Chelsea Farm, which was often visited by King George III, his wife Queen Charlotte, and the future George IV. In 1825, the property came into the possession of Granville Penn (1761-1844), a cousin of Cremorne’s widow.  Penn’s claim to fame is that he was involved in the establishment of what is now The Royal Veterinary College in London (www.rvc.ac.uk/about/the-rvc/history). Penn did much to improve the grounds of the estate, but later sold it. The house and grounds were bought in 1831 by Charles Random De Berenger, Baron De Beaufain (www.rbkc.gov.uk/leisure-and-culture/parks/), who created the Cremorne Pleasure Gardens.

The great beauty of the grounds led it to being opened by De Berenger as a public pleasure ground known at first as ‘The Stadium’. De Berenger was:

“… a sportsman and in the grounds opened Cremorne Stadium. Members who paid their two or three guineas could, under the Baron’s instruction, shoot, box, and practise “manly exercises generally” in the grounds.” (https://www.rbkc.gov.uk/pdf/CRA_Historical_Survey.pdf).

Today, there is a Stadium Street located in what would have once been part of Cremorne’s estate.

The Baron died in 1845 and the estate grounds were sold. They were laid out tastefully and the place, opened as a public pleasure ground that attracted large crowds of people seeking pleasure and entertainment, who were willing to pay modest fees for it. The gardens flourished between 1845 and 1877. In 1850, they came under the ownership of Thomas Bartlett Simpson, who also purchased Ashburnham House (an 18th century edifice) on the west side of the estate, which he used to house some of his visitor attractions. The grounds offered visitors many attractions including dancing; meals; secluded areas; firework displays; theatres for farce and vaudeville; ballets; puppet shows; trapeze artists; tight-rope walkers; a maze; and balloon ascents.

In his 1880’s “Old and New London”, Edward Walford describes some of the exploits with balloons, which were not without excitement. In 1839, whilst the gardens were owned by De Berenger, a Mr Hampton equipped with a parachute ascended two miles above the ground with a balloon and then descended to the ground with his parachute.  Some years later, Vincent De Groof ascended from Cremorne Gardens in a contraption, designed to help him fly, suspended from a balloon. After reaching a high altitude, something went wrong and poor De Groof fell to his death.

By the 1870s, the Cremorne Gardens were becoming disreputable, especially becoming notorious for prostitution. After they closed (for financial reasons), the land became used for building houses and other buildings including the Lots Road Power Station.

In about 1846, the artist JMW Turner (1775-1851) moved into a house by the river on what is now Cremorne Road, close to Cremorne Gardens and to the Cremorne Pier. He constructed a kind of gallery on its roof, from which he could sit and observe the changing light on the river. According to a biography by Peter Ackroyd, Turner was unwell whilst he lived there, suffering from dental problems that caused him to lose all of his teeth, and consequent dietary-related illness. He remained in Cremorne Road until the last year of his life and died there.

Today, little remains of Cremorne Gardens except a few street names and a small park close named Cremorne Gardens next to the river. This delightful, small open space has a paved section as well as a lawn. It is a tiny fragment of the original Cremorne Gardens but a fitting memorial to a place that provided entertainment for Londoners over many years. A couple of piers project into the river. These were originally landing stages for visitors arriving at the Gardens by river boat. Another souvenir of the heyday of the Gardens is a pair of wrought iron gates that stand in the present plot, but not in their original position, now built over. Small though it is, with its superb views of the Thames, the present Cremorne Gardens is a pleasant place to visit, within a short distance from the fashionable Kings Road.

Auditorium of the Bridge Theatre, London

The first film (movie) that I remember seeing was “The Red Balloon”. Directed by Albert Lamorisse (1922-70), a French film-maker, it was released in France in 1956, and then worldwide a year later, by which time I was five years old. After seeing the film, I was given a book with the story, which was illustrated by stills from the production.

Thinking back on it, the plot (see: https://en.wikipedia.org/wiki/The_Red_Balloon), written for children, is a little bit  too sad for young children. Nevertheless, the short film won awards all over the world. 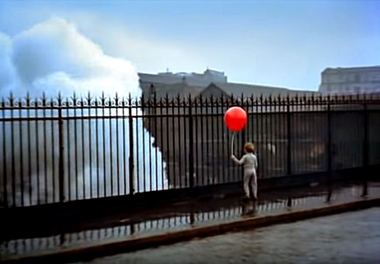 My parents were not frequent cinema-goers. However, they took me to see the film at the Everyman Cinema in Hampstead. This cinema, which still exists, was first a drill hall, then a theatre, and in 1933 it became a cinema. I saw many more films there in my childhood and adolescence. Every year, there used to be a festival of Marx Brothers films. I loved these. In those days, the cinema’s auditorium had a strange smell that strongly resembled gas.  Indeed, there were gas lamps attached to the walls of the auditorium, but I am certain that I never saw them working. The Everyman is located in Holly Bush Lane, which is close to Hampstead Underground Station and is, I am told, now a very luxurious place. The seats are comfortable and have tables beside them, at which waiting staff serve food and drinks. This is a far cry from what I can remember of the rather basic cinema in the 1960s. Back in those days, the Everyman, like the now long-gone Academy cinemas in Oxford Street, favoured screenings of ‘arty’ films rather than the more popular films that most cinemas showed. My parents, who tended to avoid popular culture, probably selected the “Red Balloon”, an arty French film, because it was a little more recherché than the much more popular Disney films that appeared in the late 1950s.

The “Red Balloon” kindled my love of cinema. For a long while I preferred ‘off-the-beaten-track films’ of the sort that were shown at the Everyman and on the three screens of the Academy. I used to enjoy slow-moving films like Eric Rohmer’s “Claire’s Knee”, Andrei Tarkovsky’s “Solaris”, and Wim Wender’s “Kings of the Road.” Now, my taste in film has changed dramatically.

The change began in mid-1993, shortly before marrying my wife, who is from India. She took me to meet an Indian couple, who lived in south London. After feeding us a great lunch, we watched the Bollywood film “Sholay”, which was released in 1975. After seeing this, I could not get enough of Bollywood films. Also, my love for slower-paced European and American films diminished. 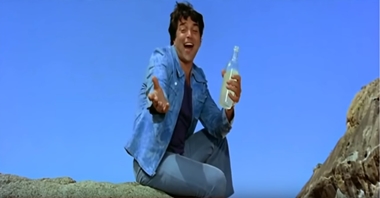 What is it that attracts me to Bollywood films? First, they are colourful, lively, fast-paced, and filled with strong emotion, music and dancing: never a dull moment. They are also filled with meaning at various levels. There is the story, often complicated and ridiculously unlikely. Parts of the plot are often based on aspects of Hindu mythology. Then, the films often convey important moral or civic messages. For example, the 1977 film “Amar Akbar Anthony” is about inter-religious tolerance. More recently, the 2018 film “Padman” is about the importance of using disposable pads to promote women’s health.

I prefer to watch Bollywood films with subtitles, but great enjoyment can be gained without them. Many of the films have dialogue in Hindustani. However, many viewers in India have little or no understanding of this language. Therefore, the films are produced in such a way that much of the message of a film, maybe not the finer details, can be understood by people with no knowledge of Hindustani. In fact, Bollywood films are not only popular in India, but in many other countries of the world. Once some years ago, some Uzbek neighbours invited us for dinner. After serving us  a national dish, plov (like pilaff), they sat us in front of a television and played a DVD with a Bollywood film. They told us that this kind of film is very popular in Uzbekistan and, also, in most parts of the former Soviet Union.

Although I have come to love Bollywood films, I am not sure that they would have been to my parents’ taste. They never took me to see Disney films when I was too young to go alone. Had there been more ‘sophisticated’ children’s films like “The Red Balloon”, maybe I would have been taken to the cinema more often in my earliest years.