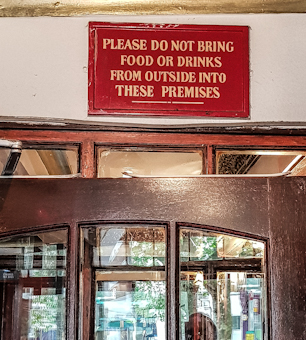 The Coffee Cup café in London’s Hampstead has been in business since 1953, and has been very popular since I first remembered it in the early 1960s. I have visited it several times, but never before noticed the sign at its entrance, which reads: “Please do not bring food or drinks from outside into these premises.” This instruction is not seen frequently in restaurants and cafés in the UK. Seeing this sign reminded me of what is very common in eateries in India, namely, signs reading: “Outside food not allowed.” Customers are forbidden to bring into the estblishment food or drink they have obtained elsewhere. That is fair enough, I suppose.

Cinemas in India, like in many other countries, try to sell food and drink to their customers, often at outrageously high prices. Apparently, watching a film is for many people more enjoyable if you are stuffing popcorn into your mouth at the same time as spilling it on the floor in the dark.

Back in 2001, my family, my in-laws, and my wife’s brothers family went to watch the recently released Bollywood blockbuster Kabhi Khushi Kabhie Gham at a large cinema in Bangalore (India). After purchasing the tickets, we had to wait in a queue before all of our baggage, shopping baskets, handbags etc., were searched by uniformed security personnel. I wondered what these officials were looking for. Was it guns or explosives, I asked my sister-in-law after we had reached the auditorium. No, it was not that, she replied. They were looking for food and drinks brought from outside the cinema. She told me that outside food was not allowed into the cinema, and then showed me inside her shopping basket, All I could see was a shawl (some cinemas are too cool because of air-conditioning). She moved the shawl aside to reveal that her bag was filled with sufficient drinks and snacks to easily satisfy all eight of us during the three and a half hour film. So much for the security check! Had we been carrying anything more dangerous than ‘outside food’, this would have also been missed by the not so vigilant security people.

It is odd how a chance sighting of something like the sign in the Coffee Cup can bring back distant memories.

3 thoughts on “No outside food”