A TRAM RIDE IN the northern Portuguese city of Porto (Oporto), home of the drink ‘port’, evoked memories of Chicago in Illinois.

In Porto, we travelled along the riverbank towards the seaside in a very old tram. Most of its seats had reversible backrests so that a passenger was able to choose to sit facing the direction of travel or face the opposite direction. These seats had a mechanism beneath each of them that allowed the seat backs to be shifted manually. On close examination I noticed that the mechanisms had been manufactured in the USA.

Seeing these seats in 2010 reminded me of Chicago in autumn 1963. My father had been invited to spend three months at the University of Chicago. We sailed across the Atlantic in the then almost new SS France (launched 1962). Sadly, this wonderful ship no longer exists. It was sold to be turned into scrap metal by shipbreakers at Alang in Saurashtra (Gujarat, India) a few years ago in 2008.

We had high hopes of Chicago, naively expecting to be put up in ‘swish’ accommodation. The first floor (American 2nd floor) flat we were lent was far from swish. There was nothing wrong with it, but we were expecting something more up to date and in harmony with our preconceptions about America being at the ‘cutting edge’ of living standards. 5608 South Blackstone Avenue was a dowdy two storey house with a highly dubious looking wooden fire escape, which would have been the first thing to go up in flames had the house caught fire. I have recently learnt that our temporary home and its neighbours have been replaced by newer buildings.

At night, the air was filled with the sound of police car sirens almost continuousl and the occasional lengthy rumble of long freight trains passing close by on the railway that followed the shoreline of Lake Michigan.

This railway line near our home was used not only used by freight trains but also by passenger trains, both inter-city and local.

Our nearest station, a few minute walk from our flat was named ‘55th-56th-57th Streets’ and was both close to a superb Science Museum and served by the suburban trains of the Illinois Central Railroad. These rather antiquated trains carried us to the then terminus, Van Buren Street in downtown Chicago. The trains were electrically powered receiving current from overhead wires.
Often whilst waiting on the platform at our local station, trains heading towards or from Indiana, operated by the Chicago South Shore and South Bend Railroad, would hurtle past us.

What interested me then, aged 11 years old, were the backs of the seats in the train carriages. They were reversible just like those on the trams in Porto, which I was to see about 37 years later in Porto.

It is curious the way that seeing one thing can trigger old memories to come to the forefront of one’s mind.

Picture of reversible tram seats in Porto from TripAdvisor 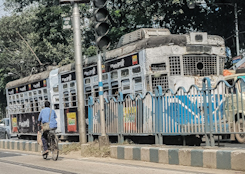 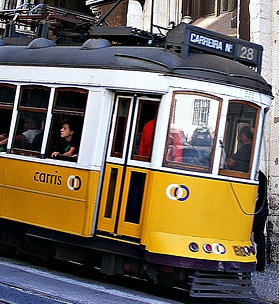 We had only been in Lisbon (Lisboa) for about three hours when we boarded the picturesque old-fashioned tram on the number 28 route, which winds its way uphill to the old Alfama quarter of the city.

The tram was quite crowded and I stood in the small entrance hallway at the rear of the vehicle. I looked up and noticed a sign in three languages (including English) that advised passengers to be wary of pickpocket thieves. I was just about to take a photograph of this sign when the tram reached the stop we wanted.  Getting off the tram was somewhat difficult becauses three men tried to disembark at the very same moment as me.

When I reached the pavement, I noticed that my overfilled wallet had gone missing. I had been pickpocketed. The thieves got a good haul: several credit cards, my driving licence, and a large sum of cash. I was stunned for a moment. Then, we used our mobile telephones to cancel our cards. Our enthusiasm for Lisbon fell to an all-time low.

We were directed to the local police station, where we began relating our sad story. Before we had managed to say a very few words, one of the policemen said:

We were then asked to visit the Tourist Police in the centre of Lisbon. We walked there feeling very downhearted and wishing that we had never come to Portugal. The Tourist Police could not have been nicer. Between them, they spoke every language you could think of. They helped us contact various banks and assured us that whoever had stolen from my pocket could not possibly have been Portuguese. After spending about an hour with the sympathetic Tourist, we left feeling much better about Portugal despite our recent loss.

With my driving licence stolen, the rented car that I had hired from the UK was no longer feasible. To our great surprise, the car hire company, learning of our disaster, cancelled our booking without charging us anything – we paid nothing for the car we were not able to use.

Without the car, we had to change our travel plans within Portugal. One of the places we visited, which we would not have seen had we had the car, was the university city of Coimbra. We spent several days in that delightful city during the period that the academic year begn. The city was full of groups of cheerful students wearing archaic black capes. Had it not been for our ill-fated trip on the 28, we might well have missed this. As they say, ‘every cloud has a silver lining’.