WHEN RUDYARD KIPLING (1865-1936) died in London’s Middlesex Hospital, his body was placed in the hospital’s chapel before being taken to be cremated at the Golders Green Crematorium, Charles Carrington wrote in his biography of Kipling that just as his coffin, draped with the Union Jack flag, arrived at the crematorium:

“… the followers of Saklatvala, the Indian Communist who had been cremated just before Rudyard Kipling, were singing the Red Flag.”

Kipling was not a sympathiser of Communist ideas and ideals.

Middlesex Hospital in the Fitzrovia area of London, where Kipling breathed his last, no longer exists. Founded in 1746, it provided medical care on a square plot of land bounded one one side by Mortimer Street between 1757 and 2005. In 2008, almost all of the hospital was demolished. The only part of the complex, which was preserved, is the Fitzrovia Chapel, in which Kipling’s body reposed briefly. Between 2012 and 2016, a new development, Fitzroy Place, consisting of flats and offices, was constructed on the hospital’s site.

The small Fizrovia Chapel, beautifully restored, stands in a small garden in the middle of the new development, dwarfed by the buildings around it. This gem of a Victorian ecclesiastical construction was designed by the Gothic Revival architect John Loughborough Pearson (1817-1897) and was ready for use by 1892 (although the interior decoration was not fully completed until 1929). The chapel’s spectacular colourful interior must be seen to be believed. Its magnificent appearance is the result of skilful use of mosaic, marbles of different types and colours, and amazing decorative motifs inspired by early Italian, Byzantine, and Moorish architecture. Some of the metal lampshades that hang from the decorative ceiling seemed to have been influenced by the types of lamps typical of Turkish tradition.

The chapel is maintained by The Fitzrovia Chapel Foundation. It is open on most Wednesdays for public viewing as well as during the occasional exhibitions and concerts that are held within it. This charming place is also available for hire for weddings, fashion shoots, book launches, and other events.

Until we attended an exhibition in the Fitzrovia Chapel in late May 2022, we had no idea that this small architectural gem existed. Along with nearby All Saints in nearby Margaret Street, the Fitrovia, a treasure chest with its sparkling golden ceiling, should not be missed by lovers of Victorian architecture and/or fine mosaic work  (as well as masterful use of inlaid stonework). 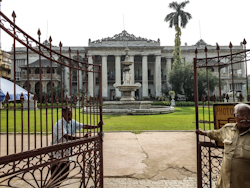 THINK OF ANY MAJOR CITY and its most famous land mark will spring to mind: Big Ben in London, the Eiffel Tower in Paris, the Coliseum in Rome, the Golden Gate in San Francisco, and so on. Calcutta evokes thoughts of the Victoria Memorial and, maybe, the Howrah Bridge.

Yet, Calcutta contains something far more remarkable: The Marble Palace. It was built in 1835 in a European neoclassical style to the plans of an architect from Italy for a prosperous Bengali merchant Raja Ragendra Mullick Bahadur. Set in extensive gardens filled with marble statues mostly imported from Europe, the palace alone is remarkable to look at.

However, step inside and a treasure house awaits you. Mullick and his descendants are avid collectors of artworks. Mullick, who had the house constructed, never visited Europe but employed agents to buy precious works of art for him. The collection of paintings in the Marble Palace make it the first ever art gallery in India. Treasures amongst the large numbers of canvases include paintings by Rubens, Murillo, Reynolds, and Ravi Varma.

Rooms on the palace are filled with antique furniture, marble and other statuary, valuable ancient Chinese porcelain, and much else.

The elaborate wooden ceilings differ in design from room to room. Looking downwards, the floors are made of marble of varying colour arranged in patterns typically found in Italian renaissance buildings. They were created by Indian workers using Italian marble and designed by Italian artists.

There is a large open coutyard in the middle of the palace. One end is occupied by a covered stage-like podium, where Hindu ceremonies are performed for the Mullick family, many of whom still live in the palace. The courtyard is filled with interesting bird calls because at one end of it, facing the podium, there are several large cages each containg a large parrot.

There is a small zoo or menagerie on one side of the gardens. Apparently, it is one of the oldest zoos in India. When we visited it, we saw various types of deer and some waterfowl.

If you do no other sight seeing in Calcutta, the Marble Palace, but not the Victoria Memorial, is a ‘must’.

Note: photography is forbidden in the palace but a small book in Bengali is available for 100 Rupees and it contains a few photos.