IN THE EARLY 1990s, I was invited to a wedding in central Italy. Although I could have flown or driven to Italy, I decided to travel by train and ferry (the Channel Tunnel had not yet been opened for use). In my bachelor days, I was not a careful packer. I used to stuff my clothes and other belongings into a rucksack in a disorderly way. I was puzzled about what to do with my smart suit that I planned to wear at the marriage ceremony. I was concerned that it would become badly creased whilst stuffed in my rucksack. I consulted one of my female colleagues at the dental practice in Kent, where I was working at the time. She gave me some useful advice that did not include asking the hotel to iron it for me.

On my way to Italy I stopped for a few days to visit some good friends who lived in Basel in Switzerland. They lived near to the terminus of a tram line that ran from the French Border, close to my friends’ flat, across the Swiss city to the German border. Although they no longer live in Basel, we now have other friends who live at the end of the same tram line, but close to the German border. Getting back to the early 1990s, I spent an enjoyable time in Basel. Before leaving, I bought an immoderate number of large bars of Swiss chocolate. My rather unhealthy plan was to take this chocolate to Italy and then after the wedding festivities were over, I would spend many happy hours eating obscene amounts of Swiss chocolate on the train while travelling back to the French coast. It seemed like a splendid plan at the time.

I arrived at the hotel in the Italian city where the wedding was to take place. As I was not yet trained to hang my clothes in wardrobes, I left my full rucksack on the floor for the duration of my stay.  Following my colleague’s advice, I extracted my creased jacket and trousers from my ruck sack, put them on hangers, and hung them in the room’s attached bathroom. Following the instructions I had been given in Kent, I turned on the hot water and closed the bathroom door so that the bathroom filled with steam from the hot water, and then I went out for some hours. On my return, the suit looked respectable enough to wear after its steaming.

The wedding festivities stretched enjoyably over three days. On each day, I attended meals in restaurants and the marriage ceremony in a municipal office. We all ate well and drunk fine Italian wines. As the saying goes, ‘a good time was had by all’.

At the end of my stay, I crammed everything into the rucksack lying on the floor of the hotel room, and then made my way to the city’s station. I boarded a train heading north through Italy towards Switzerland and then Paris, where I had to travel between the Gare de l’Est and the Gare du Nord, from where trains to Calais departed.

As my train headed across the plain of the River Po south of Milan, I began to feel the urge to make inroads into my stash of Swiss chocolate bars, which at that moment I treasured as if they were bars of gold. I opened my rucksack in which they had been stored while I was staying in the hotel in Italy, my heart sunk, and I was filled with gloom. No, they had not been stolen. Far worse, they were still there but completely and utterly inedible. Each bar of chocolate had melted and then re-solidified. However, when they had been in a molten state, they had been distorted in such a way that the silver foil in which they had been wrapped by the manufacturers had become intimately intermingled with the chocolate. After it had cooled down and solidified, all of my chocolates were welded to the silver foil in such a way that it was impossible to separate what was potentially edible from the inedible distorted strata of foil running through the chocolate. What had happened, you might well wonder. Well, there had not been a heatwave during my stay in the Italian city. What I had not realised when I was staying in the hotel was that my hotel room had under floor heating and it was this that had been warming my rucksack filled with chocolate that had been lying on the warm floor for several days.

Looking back on this after so many years, it was probably a good thing that I had not been able to consume a huge amount of chocolate all in one binge, but this is not what went through my mind at the time. 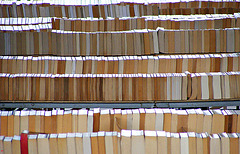 In the UK, we have ‘charity shops’, where (mostly) used goods are sold to make money for charities. In the past, charity shops were good places to find really reasonably priced bargains. This is no longer the case. Those who run charity shops are ‘wising up’. Many of them assess the value of the goods they receive by checking how much similar items are being sold on the internet. This has caused prices in these shops to rise gradually. This is quite sensible for the charities, which would like to raise as much money as possible.

I like visiting charity shops to browse the shelves of second-hand books, which they often contain. One charity shop, which will remain unidentified and is in my home neighbourhood, is managed by a person who must be aiming for very high targets in his shop. The prices of the used items in ‘his’ shop are high. Many of the used books on sale in this particular outlet are often at least half the price of what they would be if they were unused and new. The result is that the same books remain unsold on his shelves for months on end. The manager is hoping that they will raise much for the charity. However, they take up space, and are not making any money for his charity. This is the cost of greedy pricing policy.

Other charity shops within the neighbourhood, even those that specialise in selling books, price far more reasonably than the fellow described above.  If that person, whom I shall not name, is reading this piece, I hope that he will begin to realise that people visit charity shops, not because they are desperate to buy something, but because it is enjoyable discovering a bargain. 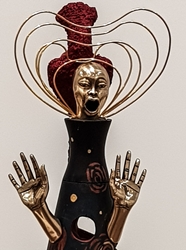 I have for you:

Detail of an artwork by Jasmine Thomas-Girvan