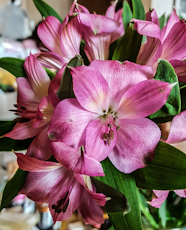 A bunch of flowers

And plenty of  good cheer

Back in the early 1990s when I was practising as a dentist in Kent and owned a house in Gillingham, my future wife and I visited the local superstore, the Savacentre. Its name has nothing to do with the River Sava that meets the River Danube near Belgrade in Serbia. The shopping mall in Kent is pronounced “saver-centre”.

We wanted to buy some flowers and approached a florist within one of the wide corridors of the mall. He had some blooms of a kind we had never noticed before. We asked him what they were, and his answer sounded like “owlstromeriya”.

We bought a bunch of these attractive flowers and asked him how long we should expect them to survive in a vase. He answered:
“No worries there. They’re good lasters.”

And, he was right.

Alstroemeria, or Lily of the Incas, are native to South America but I guess many of those on sale in the UK are grown elsewhere.

My fiancé and I were walking through a shopping mall in Gillingham (Kent) in about 1993 when we spotted a flowers seller. We stopped to look at what he had on offer and spotted a kind of flower that we had never seen before.

Later, I discovered that they were bunches of alstroemeria flowers. Also known as ‘Peruvian lilies’ and ‘lily of the Incas’, they were named ‘alstroemeria’ by Carl Linnaeus in honour of his friend Clas Alströmer (1736–1794), a Swedish baron.

We bought a bunch from the florist. As we paid, he said:

“They’re good lasters. Should last you a week or two.”

And, so they were. Now, over 25 years since we married, whenever we see alstroemeria on sale, we buy them not only for their longevity, but also because they are very attractive.