THROUGHOUT THE ‘LOCKDOWN’, our wise leader, Mr Johnson, has encouraged us to take exercise, to get out and breathe some fresh air. And, we have been following that sound advice, walking in our neighbourhood anything from two to five miles every day. Since the ‘lockdown’ has been eased recently, we have been driving out of London far enough to escape from the hurly-burly of the city.  Our latest excursion took us out westwards to a village on the River Thames called Hurley, which is upstream from the small town of Marlow. We chose our destination, the starting point for a riverside walk, almost randomly and had no idea what to expect when we arrived. 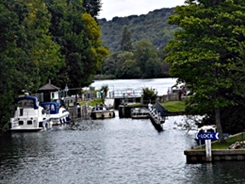 Hurley is a gem of a village. A ford across the River Thames might well have existed at Hurley before the Norman Conquest of 1066. Many of the older buildings near the river and including the heavily restored Norman church formed part of a Benedictine priory that was established by Geoffrey de Mandeville, who died in about 1100 and was one of the richest men during the reign of William the Conqueror. His pious action at Hurley was strongly influenced by his second wife, Lescelina. The monastery was ‘dissolved’ during the great Dissolution of religious institutions carried out by Henry VIII, Some of the buildings including the priory’s cloisters have been picturesquely incorporated into newer buildings, most of which are used as dwellings.

A wooden bridge crosses a stream of the river to reach an island where Hurley Lock is located. We watched pleasure boats being lowered in the lock that allows ships to avoid the weir nearby. At the end of the island, another wooden bridge crosses back onto the right bank of the Thames. We walked beside the river, enjoying glimpses of it between trees whose branches dipped down towards the water. In addition to boats of all sizes from canoes to large cruisers and barges, the water is populated by ducks, andgeese. We also spotted plenty of insects that rest on the water’s surface and flit about hither and thither: water boatmen and pond skaters. Much of the path was flanked by deciduous woodland, mostly private property.

Another bridge, a long sweeping wooden structure took us to the left bank of the river. A short distance downstream from it, we reached Temple Lock. The river was so busy that boats had to queue up to wait for admission to the lock. With the river on our right and fields on our left, some with grazing cattle and sheep, we headed towards Marlow. The path was flanked by a profusion of wildflowers, many of them being ‘serviced’ by a rich variety of different kinds of insects. Before reaching Marlow, we had good views of Bisham Abbey across the river. The former Abbey was built in about 1260 as a manor house for the Knights Templar. Now, much of it remains, and is used as one of the UK’s National Sports Centres.  Close by, the reflection of the tower of All Saints Church, Bisham, shimmers in the water of the river that flows close to its western end. The tower was built in the 12th century, and, later, in the 16th century other parts were added to the original church.

Soon after seeing Bisham’s church, the elegant suspension bridge across the Thames at Marlow came into view. The present bridge was built between 1829 and 1832 and designed by William Tierney Clark (1783-1852), who also designed Hammersmith Bridge. The famous Chain Bridge in Budapest (Széchenyi lánchíd), which is a larger version of Marlow Bridge, opened in 1849 was also designed by WT Clark. It was built by the Scottish engineer Adam Clark (1811-1866).

A slightly sensuous statue of a naked woman, apparently a nymph, can be seen near the Marlow Bridge. This early 20th century sculpture (1924) commemorates Charles Frohman (1856-1915), an American who was a famous theatrical manager who was drowned in the sinking of the Lusitania in May 1915. According to a notice next to the statue, it was erected on the spot from which Frohman used to enjoy watching the Thames.  Apart from the bridge and the statue, there was little in Marlow’s High Street that attracted us, and we walked back to Hurley the way we came. On the way back, we caught good views of Harleyford Manor, a handsome Georgian home on a grassy rise overlooking the Thames. Designed by Robert Taylor (1714-1788) for its owner William Clayton (1718-1783), a Member of Parliament for Bletchingley and then Great Marlow, it remained in the Clayton family until 1950. Currently, this protected building houses offices.

We returned to Hurley, having had a hugely enjoyable stroll along the river and plenty of fresh air. We met numerous people along the way, all of them greeting us friendlily. Many of them had dogs, and almost all of them took care to maintain ‘social distancing’. We drove away from Hurley and about half an hour later we were caught up in the hurly burly of London traffic, which was moving at barely snail’s pace around the Hammersmith one-way system. Annoying as it was, it was worth enduring after having had such a wonderful day by the river, so far from the maddening crowds.

4 thoughts on “Far from the maddening crowd”