I HAVE WALKED PAST IT OFTEN, noticed it, but had never examined it carefully until a few days ago. I am referring to the statue of Edward Jenner (1749-1823) that surveys the formally arranged pools and fountains in the Italian Gardens at the north end of the Serpentine Lake. This body of water was created in 1730 at the request of Queen Caroline (1683-1737), wife of King George II.  Originally it was fed by water from the now largely hidden River Westbourne and Tyburn Brook. Now its water is pumped from three bore-wells within the confines of Hyde Park. 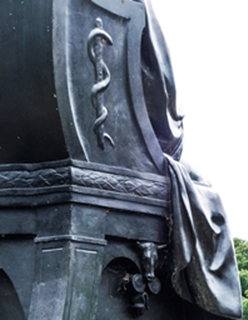 Jenner is depicted seated in what looks like an uncomfortable chair, resting his chin on his left hand, his left arm being supported on an armrest.  The bronze statue was created by the Scottish sculptor William Calder Marshall (1813-1894). He also created the sculptural group representing ‘Agriculture’ on the nearby Albert Memorial. The Jenner sculpture was originally located in Trafalgar Square, where it was inaugurated in 1858 by Prince Albert, the Queen’s Consort three years before his demise. In 1862, the sculpture was moved to its present location in the Italian Gardens. Incidentally, the design of the gardens was based on those at Osborne House on the Isle of Wight and were created in 1860 to the design of the architect and planner James Pennethorne (1801-1871).

Jenner, a qualified medical doctor, is best known for his pioneering work in developing protection against smallpox. This derived from his experimentation based on his (and other people’s) observation that the pus from blisters that milkmaids received from cowpox protected them against the far more serious disease smallpox. Justifiably, Jenner has been dubbed the ‘father of immunology’. So great was his achievement that Napoleon, who was at war with Britain at the time, awarded Jenner a medal in 1803, the year Napoleon was planning to invade Britain with his recently formed Armée d’Angleterre. The French leader said:

Maybe, these words of the great Napoleon can still teach us something about international cooperation generosity of spirit.

His fame in the field of vaccination overshadows Jenner’s other achievements in science and medicine. He was a first-rate zoologist. For example, his observations, dissections, and experiment established for the first time that the baby cuckoo is born with a depression in its back that allows it to displace the eggs of the  bird whose nest the cuckoo has colonised. The baby cuckoo ejects his or her host’s eggs without the help of the adult cuckoo, which has deposited her eggs in the nest of another species. Jenner published his findings in 1788. This was a few years before he established the effectiveness of vaccination in the late 1890s. He self-published his results in 1898 after his most important paper was turned down by The Royal Society.

Getting back to his statue in the Italian Gardens, there are two features that I had not noticed before examining it carefully recently. One of these is a depiction of the Rod of Asclepius on the backrest of Jenner’s seat.  The serpent entwined helically about a rod is traditionally associated with medicine and healing. Beneath the seat, there is a depiction of a cow’s head. This is appropriate symbolism given the importance of cows in the discovery of smallpox vaccination. The word vaccine is derived from the Latin word ‘vaccinus’, which in turn is derived from ‘vacca’, the Latin for ‘cow’. There is an object depicted below the cow’s head, which I fancy, using a little imagination, might be a stylised depiction milk maid’s cloth hat.

Jenner was not the only person experimenting with inoculation against smallpox, but he is the person best remembered for it because his results and reasoning convinced the world of the concept’s validity and applicability.

Although I do not find the monument to Jenner to be particularly attractive, it is one of London’s statues least likely to arouse anger as its subject had nothing to do with slavery. In contrast to many other well-known figures of his era, Jenner should be remembered for his important involvement in a development that has benefitted mankind for well over two centuries. I hope that his scientific descendants currently working around the world in laboratories will be able to create a vaccine to counter the Covid-19 virus as soon as possible.

1 thought on “Seated above a cow”