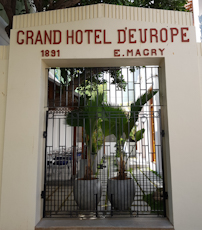 HAVING PARENTS WHO WERE BROUGHT UP IN RACIALLY conscious South Africa, I feel easier calling the two parts of old Pondicherry by their French names, ‘Ville noire’ and ‘Ville blanche’, rather than their English names, ‘Black Town’ and ‘White Town’. The English names are redolent of the sad days of racial segregation in apartheid South Africa.

While Pondicherry was a French colony, most Europeans lived in White Town, and people of local Indian origin lived in Black Town. This kind of racial separation was not unique to the French in India. The British were also keen to keep races separate. Bangalore, for example, was divided into the Cantonment (European area) and the City (local Indian area).

A rather malodorous partially covered canal or drain separates White Town from Black Town (now called ‘Heritage Town’). White Town lies between Black Town and the shore of the Bay of Bengal.

Today, more than 60 years after the French ceased to Govern Pondicherry, the White Town continues to retain its appearance as a French colonial town. Many of the buildings were built by the French and are distinctly European in architectural style. The streets are neatly laid out, tree lined, and wide. There is none of the hustle and bustle associated with most Indian towns and villages. This might be because there is little commercial activity apart from tourist related facilities (accommodation and eateries). You can enjoy a good but costly meal in White Town, but buying a newspaper or fruit and vegetables is hardly, if at all, possible.

Since our last visit to Pondicherry five years ago (just before the great storm that flooded Chennai in late 2015), the city’s authorities have placed plaques along the streets of White Town. Written both in Tamil and English (not French!), they provide short informative histories of the streets’ names.

Cross the covered drain into what used to be called ‘Black Town’, and familiar Indian urban life is flourishing. The streets are crowded; there are shops aplenty; the area is full of traffic: two, three ,four (and more) wheeled vehicles; and there are Hindu temples (as well as churches). Apart from tiny roadside Hindu shrines, the only places of worship in White Town are churches.

In contrast to White Town, the architecture in the old Black Town is not so fine. There are a few traditional Tamil style buildings, but much of the architecture is relatively new and generally lacking in visual appeal.

Apart from being a very pleasant place to visit, Pondicherry and its well preserved historical layout offer an interesting reminder of colonial life and its less savoury racist aspects. That said, the place and its beautiful seaside promenade is a joy for all visitors whether or not they have any interest in history.