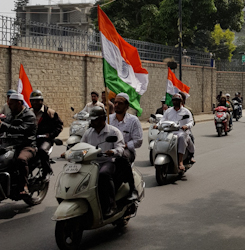 INDIAN INGENUITY KNOWS NO BOUNDS. Recently in many Indian cities, there have been public protests against unpopular new legislation. Bangalore is one of these cities.

To counter the protestors there have been temporary bans on large groups assembling to protest. In some places the police have arrested and even attacked some protestors, causing injuries and deaths.

On the 23rd December, I was walking along Museum Road in central Bangalore. Suddenly, I saw swarms of motorcycles streaming past. Many of the people on the cycles were carrying the Indian tricolour, the national flag. The flags flew behind the bikes. Some of the passengers on the motorcycles were carrying paper banners with words expressing dislike of the new legislation.

The motorcycles were most probably heading towards a planned public protest. But, they might also have been carrying out a mobile protest, which being at a high speed made it difficult for the police to control. Even if they were only travelling towards the site of a protest gathering, it struck me that this high velocity and noisy protest on wheels was an ingenious way of attracting public attention whilst minimising the risk of police interference.