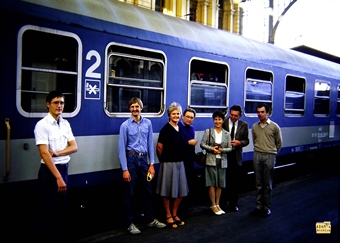 I used to visit Budapest in Hungary frequently in the 1980s during the Communist era. I had many good Hungarian friends there. They were very hospitable to me.

One day, I happened to visit the advanced booking office at Budapest’s grand Keleti (Eastern) Station. I have no recollection of where I was planning to go, but that is not relevant to the true story that follows. The smallish rectangular room was lined with about ten (or more) counters at each of which there was a booking office official.

A young Soviet Russian soldier entered the room. He was in an immaculately smart uniform and looked proud. He went up to the first counter and spoke to the person behind it. After about a minute, he was instructed to go to the next counter. Once again, he spoke to the official behind the window at the counter. And, after a few minutes, he was directed to the next counter. This went on until he had visited each counter in the room and reached the last one. At the last one, the official indicated that he should leave the room as he was in the wrong room for obtaining tickets for Soviet military personnel.

You might have thought that the official at the first counter he visited would have directed him to the correct place, but no. So great was the average Hungarian’s disdain for the Soviet soldiery that was keeping their country under the thumb of the Soviet Union that the officials in the booking office conspired together to waste the young Soviet soldier’s time and humiliate him. It was a beautiful example of passive resistance.