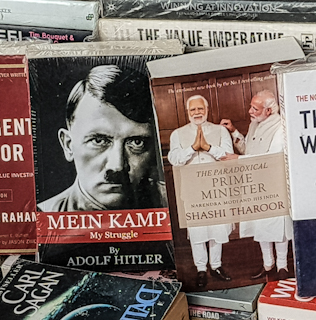 Book shops and stalls all over India sell English translations of Mein Kampf by the late and unlamented Adolf Hitler. His literary oeuvre is available in several editions published by different Indian publishers. Judging by its appearance in so many booksellers’ shelves often prominently displayed, this book, written before Hitler became Chancellor of Germany in 1933, is clearly still in great demand. After all, most book merchants do not stock books that do not sell.

Mein Kampf is usually displayed in Indian shops alongside other books by or about figures, who have made a significant impact on world affairs. For example, I have seen Hitler’s book next to volumes about Barack Obama and Bill Gates.

The pavements near Flora Fountain in Bombay are lined with wonderfully well stocked books, both new and used. The men who sell the books are well informed about their stock. They know whether or not the book that you desire is lurking amongst the piles of books stacked from the pavement to above their heads.

On one of these stalls, I spotted a shiny new edition of Mein Kampf. It was displayed prominently next to a book by Shashi Tharoor about India’s current PM, Narendra Modi and a book by Carl Sagan. Hitler’s face and that of Modi stared out at potential book buyers and other passers by. Was this arrangement of books by three great communicators accidental or was the vendor making an interesting statement?

2 thoughts on “Hitler on the shelf”