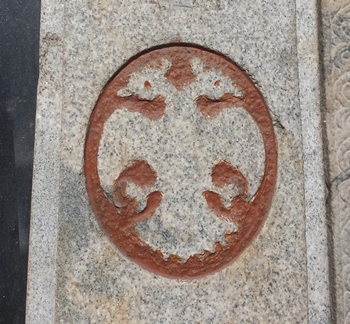 On a Hindu temple in Bangalore, Krnataka, India

The earliest archaelogical evidence of the existence of double-headed eagle (‘DHE’) or any other bird with two heads (each with its own neck) is in Bablylonian remains dating back to 3000-2000 BC.

The DHE is and has been used as a heraldic symbol by, for example: the Scythians, the Hittites, the Seljuk Turks, the Kingdom of Mysore (in India), pre-Columbian America, Cormwall (UK), Byzantium, the Holy Roman Empire, the Russian Empire, and several states in the Balkans. The Balkan states that use the DHE include: Albania, Montenegro, and Serbia.

I find the DHE to be a fascinating symbol because unlike, forexample,  the cross, Star of David, and swastika, it is not a simple geometric construction, which could be created by random ‘doodling’. Also, it is not naturalistic like the commonly used  such as a lion,  single headed eagle, bear, fish, and hound.

There is a Hindu mythological creature, a bird with two heads, the Gandaberunda, which has been adopted by the Government of Karnatak (formerly Mysore) as its state emblem. The origins of this creature are obscure, but it has been described in the ancient Hindu texts, the Vedas.

The DHE is an imaginary creature, a product of human thought. The Babylonians not only portrayed the DHE, but also other double-headed creatures.

I would like to SPECULATE that the origin of the DHE was Mesopotamia. From there, I imagine it spread through what is now Turkey to Europe, and across the Indian Ocean to India. If the DHE, or something similar appears in the Vedas, it would be interesting to know if this was by chance or as a result of some forgotten connection between Mesopotamia and the Indian sub-continent.

1 thought on “One body, two heads”