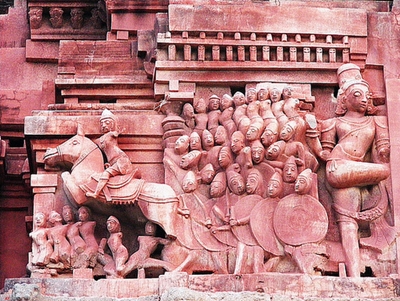 The state-run Mayura Hotel at Hampi is conveniently located in the midst of the extensive, picturesque ruins of the once very prosperous city of Vijayanagara. The former city was once the world’s second largest metropolis, but it was destroyed in 1565. I have stayed at the hotel on at least three occasions despite its shortcomings, some of which I will describe below. It is only fair to point out that the last time I stayed at this hotel was at least nine years ago. Things might well have improved by then.

On one occasion, we were driving to Hampi from Bangalore, and were running late. We rang the hotel to tell them that we would be likely to turn up by 6 pm. They replied that it would not be a problem: our room was waiting. And, so it should have been because check-out time was 12 noon. Whoever had occupied the room on the previous day should have vacated their room by noon.

When we turned up at the hotel, we were told that the room we had booked was still occupied. We were not pleased. The receptionist explained that the occupants of our room, who should have vacated it by noon, were still using it. We remonstrated and asked for an explanation. We were told that the family that was overstaying in our promised room had also arrived late the day before, and the hotel was kindly letting them extend their stay at our expense.  We were tired and not amused.

The receptionist and another member of staff settled us temporarily in a small bedroom while we waited for our room to become vacant and cleaned up. After a couple of hours, we were shifted to our allotted family room. There were several workmen in the bathroom. They were trying to turn off a jet of water, like a geyser, that was shooting up from the floor. They managed after about an hour.

There were no towels in our accommodation. By now it was well after dark. We asked for towels and were told that we could not have them because the person with the (presumably only) key to the linen cupboard had gone home.

At the end of one of our stays at the Mayura, we asked to have breakfast at 7 am, when the dining area was supposed to open. When we arrived promptly at 7 am, there was no staff too be seen. Apart from us, the dining area was empty. After a few minutes, I walked into the kitchen: it was empty. All of the kitchen and serving staff were standing in a crowd in a nearby room, their eyes glued to a television screen. We learned the reason when, eventually, someone came to look after us. The television was showing the funeral of the much-loved Kannada film star Vishnuvardhan, who died on the 30th December 2009. Vishnuvardhan’s family were dismayed because his loss was not so greatly mourned as that of another star Rajkumar, who had died three years earlier. People had committed suicide on hearing of Rajkumar’s demise. Nevertheless, our driver thought it would be safer if we drove with a photo of Vishnuvardhan attached to the window as a mark of respect. Without it, we might have been attacked!

During one of our stays, we were curious to taste what appears on many South Indian restaurant menus. It is something called ‘Chicken 65’. What appeared resembled breaded chicken nuggets. They were bland and tasteless – very disappointing.

Some days later, we had dinner with an elderly Dutch couple, who were back-packing around India. It was clear to us that they had had enough of spicy food. We suggested that they ordered French fries (finger chips in Indian English), which, like omelettes and tomato soup, are almost always available wherever you are in India. Their eyes lit up at this suggestion. Also, we recommended that they order Chicken 65, which we assured them was not at all spicy.

After a while, the chips were served along with a plate of chicken pieces that did not resemble the Chicken 65, which we had ordered a couple of days earlier. Our new friends tasted this dish, and their eyes nearly popped out of their sockets. What had been served to them as Chicken 65 was far from bland; it was fiery hot. It seemed to us that the chefs in the kitchen paid little attention to what was ordered by the customers. We later learned that Chicken 65 is supposed to be hot and spicy. What we had been served before we met the Dutch people, was definitely not that dish.

The spicy dish was originally created at Buhari’s Hotel in Madras in 1965, hence the 65 in the name (see: https://www.thehindu.com/news/cities/chennai/the-hows-whys-of-our-chicken-65/article5042658.ece).

While we were staying in the hotel one visit, a tour group of Italians had dinner one evening. One man, who had had enough of spicy food, shouted out in a hysterical voice: “I want chicken, plain chicken with salt, nothing else, just chicken and salt, no spices, just chicken and salt.” He kept repeatng this, and we thought: “He should be so lucky in this eatery”.

Despite its elements of “Fawlty Towers” hospitality, the Mayura is a lovely place to base a few days of exploration of the substantial  ruins of a once great city.