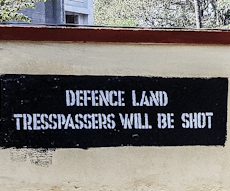 At your own risk, boldly:

Maybe you will regret it

Some years ago, some youngsters were messing around on their motorbikes late at night on the empty Old Airport Road that passes several military compounds. When they were stopped by the police, they dismounted and scattered in all directions. One youngster leapt over a wall and into the garden of the local commander’s bungalow. When challenged by a guard, he kept running. The guard shot him dead.

Years ago, I had friends who lived south of Hampstead Heath in South End Green, near where the writer George Orwell lived during the 1930s. I often visited my friends there and usually stayed with them until long after public transport ceased working late at night – those were the days long before 24 hour bus services. In those days, I was a student with limited means. Taxi and minicab rides to my home in Hampstead Garden Suburb to the north of Hampstead Heath were costly and if used too often would eat too deeply into my meagre funds.

So, often I used to walk through the darkness to my home, a distance of well over 2 miles. Most of this walk was across the wooded stretches of Hampstead Heath. Even back in the 1970s, this vast expanse of urban woodland was far from safe. Murders and attacks were not unknown. My parents and others would have been horrified to learn that I was risking my life to save paying a cab fare. Was I scared? The answer was both yes and no. I was concerned because of the news stories I had read. Yet, on the other hand I was not so afraid.

I felt that anyone encountering me on my nocturnal wandering deep in the secluded heart of Hampstead Heath might have had one of two reactions. Either he or she might have imagined that I was up to no good and possibly on the prowl for victims and would therefore steer clear of me, or that the person  whom I encountered was up to no good. If he or she was ill-intentioned, the person would have still had to be a little bit cautious because I might have turned out to be more than a match for him or her. This reasoning would have done me no good had the person I met been severely evil.

Fortunately, luck was on my side. I never encountered anyone, innocent or evil, on my nocturnal strolls. However, I would never even dream of making this kind of journey across Hampstead Heath again, and would not advise anyone else to attempt it because London has become more dangerous than it was in the 1970s and before.