RICHMOND-UPON-THAMES WAS NOT a place that I would have associated with refugees until we went for a walk with some friends along the Thames footpath on the right bank of the river. We started at Richmond Bridge and headed towards Twickenham. Richmond Bridge is a handsome stone structure built by 1777. It was the eighth bridge to be built across the Thames and is now the oldest surviving bridge crossing the river. 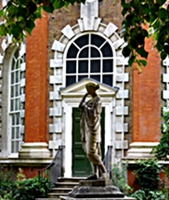 A leafy footpath runs alongside the river in which pleasure boats and waterfowl can be seen. Soon we arrived at a carved stone monument, a twisted polygonal structure on which words have been carved in three languages: English, French, and Flemish. The base of the elegant but simple monument has the words “The Belgian Village on the Thames” and above them, the dates “1914-18”. Nearby, there are a couple of information panels describing the history of a Belgian settlement on the river between Richmond and Twickenham during WW1. A Belgian village? You might well wonder; I did.

On the 7th of October 1914, Charles Pelabon, a French engineer who had been working in Belgium arrived in Britain with some of his workers. By the start of 1915, he had set up a munition factory in a disused roller-skating rink in East Twickenham. The factory soon employed as many as 6000 workers, mostly recruited from the vast numbers of Belgian refugees who had fled their country after war had broken out. This led to the establishment of a sizeable Belgian community, with shops and Belgian schooling, between Twickenham and Richmond. Sadly, almost all physical traces of the community have disappeared. Where the factory once stood is now covered by blocks of privately owned apartments. Standing next to the elegantly designed monument, it is hard to imagine that this almost rustic stretch of the river was a hive of industrial activity and filled with people speaking in French and Flemish.

Currently, our government is holding out the offer of homes in the UK for up to many residents of Hong Kong. I wonder whether we will see the establishment of ‘Hong Kong Village(s)’ to accommodate ‘refugees’ from a part of China that is undergoing potentially serious changes to its hitherto special status.

Further along our walk, we reached the park surrounding Marble Hill House. This neat looking Palladian villa set back from the river was constructed between 1724 and 1729 and designed by the architect Roger Morris (1695 -1749). It was built for Henrietta Howard (1689-1767), who had been the mistress of the then future King George II. When she ceased to be the mistress of King George II, Henrietta bought land beside the river and built Marble Hill House, using the substantial financial settlement she received from the King.

Crossing a small lane, one leaves the grounds of Marble Hill and enters the smaller grounds of Orleans House, or, at least what, remains of it. The house was a fine Palladian villa built for the politician and diplomat James Johnston (1635-1737) in 1710 to the designs of the architect John James (c1673-1746). In 1720, an octagonal room in the baroque style, designed by James Gibbs, was added. This was used to entertain George II’s Queen Consort, Caroline of Brandenburg-Ansbach (1683-1737). She regarded Johnston with ‘great favour’.

Between 1813 and 1815, Johnston’s house was home to another royal visitor, a refugee from France, Louis Philippe I (1773 -1850), the Duc d’Orléans. Soon after the execution of his father in 1893, he left France. Later, he returned to France where he reigned as King Louis-Philippe I, the last king of France, between 1830 and the year of revolutions all over Europe, 1848. A print by the French artist Pingret shows the King and Queen Victoria visiting Louis Philippe’s former home at Orleans House some years after his coronation. It was the first time that a British and French monarch had been together on British soil for 500 years (see: http://www.bbc.co.uk/ahistoryofthe…/…/NrKCqDE8Q-arYJHipxLXDQ). Although most of the house was demolished in 1926, the octagonal room was saved. I noticed a fragment of masonry in the grounds close to the remains of the house. It bears a crest on which there are two fleur-de-lys symbols. In the 21st century, a new arts centre, including an art gallery, was built that incorporates the octagonal room, which has been restored to its former glory.

Further along the river near a disused ferry landing stage, we came across the home of yet another refugee, the composer and conductor (Sir) Andrzej Panufnik (1914-1991). Born in Warsaw, Panufnik, a leading light in the Polish classical music community, ‘defected’ to the West in 1954 having become uncomfortable with the politically dominated cultural environment in Poland. He settled in Britain, becoming a British citizen in 1961. After marrying Camilla Jessel in late 1963, the couple bought the house near Twickenham that overlooks the Thames and now bears a light blue circular commemorative plaque with a red Polish eagle on it.

We returned to Richmond Bridge following the riverside path. We watched a plucky little dog rush into the water only to make a hasty retreat when swans hissed at him. Despite the birds’ unwelcoming threats, he dashed into the water several more times. We arrived back at Richmond Bridge after having enjoyed a pleasant stroll and seeing three places that have provided people from Europe with ‘a place of greater safety’, these being the words used by Hilary Mantel as the title of one of her novels.