In August 2003, the middle of winter in South Africa, we made a long tour around the Cape Province, visiting small places that figured in the history of my family’s sojourn (beginning 1849) in South Africa. Here is an account of our journey to Hogsback in the Eastern Cape. The writer JRR Tolkien is supposed to have been inspired by the landscape near Hogsback, but not all are agreed on this. The author was born in South Africa (in Bloemfontein), but left the country aged less than three years.

Between Barkly East and Dordrecht

We sped on from Barkly East to Dordrecht. It was at Dordrecht in 1884 that my great grand uncle Sigmund Seligmann with his partner, another Jewish gentleman, Moss Vallentine opened their first business, a retail store. Later, he opened a general store in Barkly East, where his nephew, my mother’s father, became the town’s only Jewish Mayor. 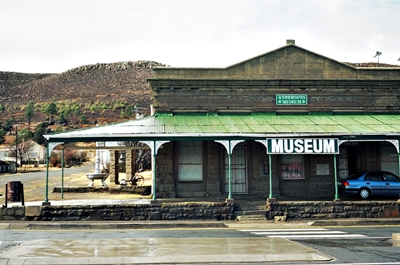 Dordrecht, a smallish place, still has several nineteenth century buildings including one with an elegant arcade supported by cast-iron pillars that serves as a museum. Andre Coetzee, the museum’s curator, pointed out an old shop opposite the museum that he believed had originally been Seligmann’s.  He seemed very certain that this was the building, but he could not show me any evidence to confirm this.

The rain and snow continued to shoot past us, propelled by a fierce wind. Between Dordrecht and Queenstown, we crossed a plain that was quite different to anywhere we had been so far. The plain was quite literally dotted with thousands of ‘black’ peoples’ dwellings, some with rondavels as out-houses. There were few fences. People and animals wandered across the road. The countryside was much less manicured than any other inhabited places we had so far visited in the Cape. Derelict cars were frequently seen. We were in Chris Hani District that includes the town of Queenstown and was under the Apartheid regime part of one of the so-called ‘Homelands’.

Queenstown is not an attractive town but has a lively buzz and good shops. A sign in the town centre advised motorists to pay for parking at a “mobile parking meter”. This meter turned out to be a person who hangs around the parking area carrying a machine on which he or she records your arrival and departure times and based on these determines how large a parking fee needed to be collected. We found a wonderful spice shop run by a Pakistani man. He had a special table on which he can make spice mixtures to order and, also, had ready-made mixtures including one, very strong in flavour apparently, called “Mother-in-law Masala”. We visited a large branch of Woolworths as many people had commended this chain store to us. We were disappointed: it was like Marks and Spencer’s used to be in the UK many years ago.

We drove via Whittlesea to the tiny village of Seymour. A road marked incorrectly on our map as “narrow but with tarmac, not for four-wheel drive vehicles alone”, led from Seymour up the side of a mountain to Hogsback. This road proved to be the worst surface that I have ever driven on. Compared to it, Joubert’s Pass (near Lady Grey), was a motorway. It got progressively worse as we painfully slowly approached Hogsback.

The road had everything against it and us. There were potholes, and deep furrows where streams of water had eroded the gravel. Bare rock showed through the road and made steps that had to be carefully negotiated. Worst of all were large rounded boulders, which were difficult to drive around as the narrow road was bounded either by ditches or by walls of rock. We were lucky that we neither capsized the car nor grounded it, nor damaged the sump or some other vulnerable part of its under surface. Navigating around or across some of these dangerous obstacles reminded me of performing a particularly difficult surgical dental extraction. Just as I had to take care not to damage a hidden nerve or blood vessel during an extraction, I had to drive to avoid injuring some important part beneath the car. Had we broken down on this deserted, barely frequented road, we would have been in big trouble. There was no mobile ‘phone coverage in the area. Hair raising to say the least: I still shudder when I remember this journey. Later, a cousin in Cape Town told me that when he had used this road, he had grounded his vehicle and thereby damaged its fuel line. Things improved at the end of the road. We were amused to see a road sign at the Hogsback end of this road that advised “Road not recommended for caravans.”

A view from Hogsback

We found our accommodation: a collection of cottages called The Edge. The name refers to the position of the cottages which is at the very edge of the summit of the Hogsback ridge over which can be seen a view of the coastal plain over a thousand feet below. Our cottage was large but unheated except for a small, inadequate fireplace poorly located in one corner of the cottage remote from the bedrooms. We ate an excellent curry made by Dion and Shane who own a restaurant near our cottage. All night the snow fell, and the wind howled. 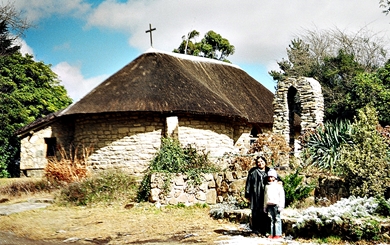 A church in Hogsback