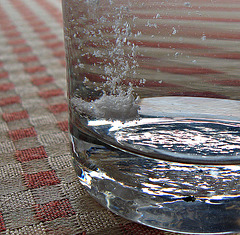 Quite a long time ago when I was in my twenties, I was invited by an Italian friend to stay at the hotel, which his parents ran in the Val ‘d’Aosta in a mountanous part of north west Italy. The hotel, which was quite luxurious, catered mainly for elderly clients.

We used to eat meals in the hotel’s elegant dining room. All of the tables had starched table cloths and napkins (serviettes), beautifully polished glassware, and shiny silver cutlery. What struck me as surprising was that by almost every table setting, there were small bottles filled with tablets and capsules of varying shapes and colours. These were laid out ready for those of the diners who were required to take medicines with their meals.  The image of the medicine bottles as table settings has stuck in my my mind more than the rest of my stay at the hotel.

Now, many years later, although I rarely eat at such elegantly laid tables as in the hotel in the Val d’Aosta, I too need to have my collection of assorted tablets every breakfast and evening meal. I never imagined that I would be doing this when I was staying at my friend’s parents’ hotel. Well as the annoying saying goes “such is life“.

The French philosopher Voltaire is believed to have written:

I was at a party in Athens, Greece, in the early 1980s when I suddenly became aware of bilateral back pain and nausea. Luckily, there was a medical doctor amongst the guests. He diagnosed a kidney or bladder infection and wrote a prescription for bactrim. The tablets were very effective and rapid acting.

A year or so later, I was flying to Greece via Rome in Italy when I experienced a recurrence of the symptoms. As I had quite a long stopover in Rome, I took the opportunity to visit a pharmacy, but this time without a prescription. To my great surprise and relief, the pharmacist sold me some bactrim without requiring a prescription.

In the UK, it is not possible to obtain antibiotics and most other medications without a prescription. There are also rules determining how much non prescription medication can be bought at any one time.

In India, which I visit often, I have never been asked for a prescription to obtain any kind of medication. One just asks for the medicine or tablets required, and then following payment they are handed over the counter. Quite a few of the medications I have needed in India have been clearly marked as prescription only medicines, but these words are ignored by the pharmacy salespeople.

Having been trained as a dentist I have some knowledge of pharmacology. So, I feel that I am unlikely to abuse the ease of obtaining medicines in India, but I worry about others with less knowledge than me.

The freedom of being able to obtain medications without having to first get a prescription has mixed blessings. On the one hand, if you are certain that you need a particular drug or simply need a repeat of what you have been taking, not needing a prescription can save you time and money that visiting a doctor entails. On the other hand, self diagnosis and self treatment is not without risk.

What Voltaire wrote many years ago is less true today than it was then. But, still, even after so many advances have been made in medical science , a great deal of ignorance about the human body remains.