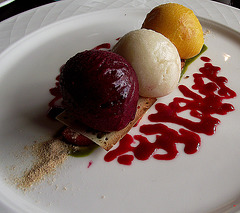 Not long ago, we visited a restaurant. To save it from being emabarassed, I will not mention its name or location. On its dessert menu, it had the following item: “Mango”. This was described as coconut ice cream with mango sorbet, topped with a single raspberry, a lychee, and a fruit sauce.

One of our party wanted to try the “Mango” as described on the menu. A friend and myself wanted, if possible, a scoop or two of mango sorbet without the other trimmings. We asked one waitress if it would be possible to have the sorbet on its own. She went away to consult, but never returned.

After a while we asked a waiter, who appeared not to be fluent in English, whether we could have the mango sorbet solo. We asked him several times. He kept on replying:

He appeared not to be able to distinguish the word ‘strawberry’ from ‘sorbet’.

Not willing to give up, we called the manager to repeat our wish. He told us that he would speak to the chef. He returned quickly and assured us that our wish would be granted.

The desserts arrived. The person who ordered the “Mango” as described on the menu received a lump of mango sorbet fused to a lump of coconut ice cream. This was topped with a single raspberry and a piece of frozen kiwi fruit, but not a lychee in sight. This was covered with a sweet red fruit sauce.

Those who had sought mango sorbet on its own, my friend and I, received not plain mango sorbet, but a deconstructed version of what was on the menu. The mango sorbet was fused to the coconut ice cream, and the other ingredients, including the frozen kiwi piece, were neatly arranged around the inseparable icecream and sorbet. The sauce was placed in a small dish.

Two things occurred to me later. First, the restaurant only had the mango sorbet inseparably fused to the coconut ice cream. Secondly, the restaurant had no idea how much to charge us had we been served the ice cream/sorbet without the trimmings.

To compensate for the delay and confusion, the manager provided us with an extra portion of the “Mango” dessert ‘on the house’. That would have been kind had the unasked for extra portion not appeared on our bill!