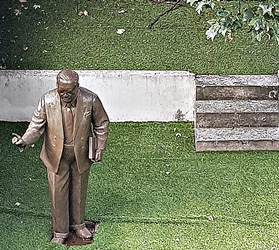 Almost wherever you go in India, you are bound to see the statue of a man wearing spectacles with round lens frames and a suit. He is always carrying a large book under his left arm. These statues depict Bhimrao Ramji Ambedkar, who was born in Mhow (now Dr Ambedkar Nagar in Madhya Pradesh) in 1891, son of an Indian army officer. He died in New Delhi in 1956. This remarkable man was a jurist, economist, politician and social reformer. He was a founding father of the Republic of India and helped formulate the Indian Constitution. He is best known for his work on promoting the rights of the ‘dalits’ (‘untouchables’) and reducing discrimination against them.

Between 1920 and 1922 while he was studying at the LSE and for the Bar, Ambedkar lived in a house at 10 King Henrys Road near Chalk Farm in north-west London. In 2015, the house was bought by the Government of Maharashtra and was then converted into a memorial to Ambedkar. It is open to the public. Visitors can learn about Ambedkar from the well-captioned photographs on the wall of the rooms that they can wander through. The upper floor contains a re-construction of Ambedkar’s bedroom including a four-poster bed, some of the great man’s books, and an old pair of spectacles, which might have belonged to him. Other rooms contain shelves of books and various memorials to Ambedkar. There is also a commemorative plaque to India’s present Prime Minister Narendra Modi, who inaugurated the memorial house in November 2015. The garden contains a typical statue of the type I have described above.

Sadly, this monument to such a great man is under threat. Some local residents have been complaining that it is annoying to have a museum amidst their overpriced bourgeois residences (see: https://www.bbc.co.uk/news/world-asia-india-49411985 ). Camden Council, in whose borough the Ambedkar house is located, are to decide on its fate at a hearing to be held in September 2019. I hope that the (racist???) objecting residents of King Henry’s Road will not be permitted to help to erase the memory of a truly great man’s stay in London.

FOR A FEW PHOTOS OF THE AMBEDKAR MEMORIAL HOUSE, CLICK HERE: