NOBODY IS PERFECT, and that includes all of those ‘great’ men and women whose lives are remembered with statues. Let me state at the outset that I am against both idolatry and iconoclasm. I do not believe that anyone should be worshipped without questioning (or even after questioning) nor that statues should be destroyed.  Everyone has good and bad points, and that should be remembered always when looking at a statue. 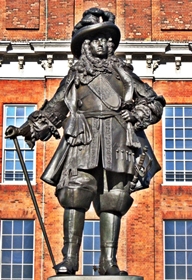 Let me state at the outset that I am against both idolatry and iconoclasm. I do not believe that anyone should be worshipped without or with questioning nor that statues should be destroyed. Everyone has good and bad points, and that should be remembered always when looking at a statue.

Consider Cecil Rhodes (1853-1902). He was not a person that I would have enjoyed meeting, even for a brief drink in a pub. From what I know of him, he was power hungry and greedy and would stop at nothing to achieve his goals.

Undoubtedly, money derived from his endeavours has been spent on good works including the famous Rhodes Scholarships, which began funding bright young scholars from 1902 onwards. Many academic and other fine accomplishments have been achieved by the recipients of these awards. However, some of them are now criticising the way that Rhodes exploited/plundered Africa to produce his wealth. Given that these scholarships, funded by what some might describe as ‘dirty money’, are awarded to people with above-average intellectual abilities who could easily have examined Rhodes’ history, I find it strange that the recipients did not question the morality of the origins of what was being offered to them before receiving and spending it. Some recipients justify accepting the scholarships by saying it is a way that Rhodes’ debt to Africa can be partially repaid. Maybe, but would you feel comfortable if, say, the infamous Kray Twins or Al Capone offered to use some of their ill-gotten gains to fund your education? Would you justify accepting their money by saying that although they killed people and committed crimes like theft, it was good that they were using someone else’s wealth to repay their debt to society? Few people would justify erecting statues to either the Kray Twins or Al Capone.

Unlike Capone and the Krays, Rhodes was not breaking any British law when he was plundering Africa to glorify the British Empire and line his own pockets. From the viewpoint of the great majority of ‘white’ British people, his contemporaries, Rhodes was doing a good job during his lifetime for the Empire and his native land, Great Britain. Statues were erected in his memory by those who had benefitted from his life’s work. Those people were mostly, if not all, ‘white’ people. The monuments were put up during an era when racial prejudice went unquestioned and people ‘of colour’ lacked any public influence.

Times have changed. The racial situation, the rights of ‘people of colour’, is also changing, albeit too slowly. Recent and not so recent events across the Atlantic in the “land of the free and the home of the brave” have justifiably heightened popular consciousness and questioning of the worthiness of those, like Rhodes, whose statues adorn our lands.

So as Vladimir Ilych Lenin, discredited by some, and many of whose statues have been toppled, asked in 1902:
“What is to be done?”
What is to be done with the statues of celebrated people with flaws in their personalities? One could pull them down as has been the case with many statues of Stalin, Enver Hoxha, Saddam Hussein, and more recently a slave owner in Bristol. Apart from temporarily assuaging the temper of an assembly of aggrieved folk, the toppling or destruction of a statue might have few or no lasting beneficial effects.

It would be far better to remove the statues from positions of great public prominence to more discreet locations (maybe to museums) and to label their plinths with inscriptions that summarise the subjects’ both good and bad actions. Also, it would be a good idea to educate children and other students to understand that just as there are two competing teams in a football match, there are two sides to a person’s personality: a good one and a bad one. It is the balance of these that needs to be judged. In the case of Rhodes, the bad wins, but in the case of, say Edward Jenner (of smallpox vaccination fame), whose statue can be found in Hyde Park, his good features easily predominate.

Finally, destruction of statues and monuments worries me because they are part of remembering. If we know that a monument commemorates something that should not be repeated, such as slavery, let it remain, suitably labelled, so that we do not run the risk of unpleasant aspects of history repeating themselves. For as the philosopher George Santana (1863-1952) wrote in 1906:
“Those who cannot remember the past are condemned to repeat it.”