ON SATURDAY THE 17th MAY 2020, an act of cultural barbarism was performed in Tirana, the capital of Albania. The National Theatre of Albania in the heart of the city was demolished. It is unclear who ordered this demolition of a much-loved cultural monument located in a part of the city where property prices are high. The theatre was built in 1939 during the period that the Italians, under Mussolini, were ruling Albania. It was originally a cinema designed by the architect Giulio Berte, but later its screen was replaced by a stage. 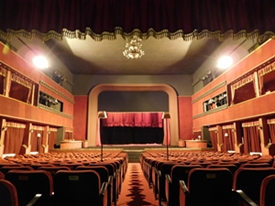 In 2016, my wife and I visited Tirana and attended a dramatic performance at the National Theatre. I have described this in my book “Rediscovering Albania”:

“…we visited the National Theatre, a building that dates back to before Communist times. A Pirandello play (Play without a Script) was to be performed in Albanian that evening. The charming ladies clustered around the ticket desk assured us that we would enjoy it because it was going to be full of song and dance. We bought a couple of tickets … The rectangular auditorium of the National Theatre was delightfully old-fashioned, with many drapes and an upper gallery that extended around three sides of it. Everything was red including the plush upholstery of the comfortable seats. Although we did not understand a word of it, the Pirandello play was acted beautifully. The expressive acting was so good that we were able to get a rough idea of what was going on. Some years earlier in London, Lopa and I once attended a performance of Gogol’s Government Inspector acted by a Hungarian troupe entirely in Hungarian, and on another occasion a play from Kosovo in Albanian, during the course of which one of the actors threw a fake chicken at me! On both of those occasions and also in Tirana, great acting compensated for our inability to understand the words. If the actions of actors move me more than their words, I feel this is a sign of truly skilful acting. As the great Constantin Stanislavski said: “The language of the body is the key that can unlock the soul”. This is exactly what the actors in Tirana achieved. The audience was appreciative, and, unlike at the opera, hardly anyone used their mobile ‘phones during the show.”

That has now disappeared. So, has also the unusually attractive appearance of Tirana as it was when I first visited it in 1984 during the dictatorship of the faithful follower of Joseph Stalin, Enver Hoxha. In those repressive times, Tirana was a quiet city with only one high-rise building, the 12-storey Hotel Tirana. Of course, back in 1984, times were tough for the average Albanian citizen. They remained quite difficult during the decade following the ending of Communist rule in 1991. Even now, many Albanians prefer to increase their prosperity by seeking work abroad.

When we visited Tirana in 2016, I found it to be a far busier place than it was in 1984. The traffic was busy – a sign that motoring, an option not available to most Albanians during the dictatorship, had become popular and also affordable. Some of the charm of pre-1991 Tirana remained, but many picturesque old buildings, examples of traditional Turkish and Balkan vernacular architecture, had disappeared (or were about to). In their place, there were many high-rise buildings of little or no architectural merit. I suspect that whoever ordered the demolition of Tirana’s historic, much-loved National Theatre has in mind to construct yet another aesthetically unpleasing edifice.

If as Shakespeare said, “All the world is a stage”, then the demolition of this theatre in Tirana is yet another tragedy enacted on that stage.

6 thoughts on “Death of a theatre”