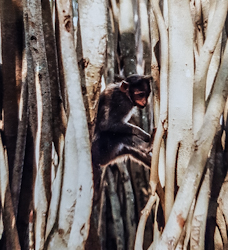 I AM NOT A LOVER OF picnics. My perfect idea of eating outside my home is not squatting on a rug in a picturesque open-air location, but in a restaurant. In contrast, my wife and her parents loved picnics.

Many years ago, when both of my dear in-laws were still alive and healthy, that is well before 2006, we decided to have a picnic at the Big Banyan Tree just outside the city of Bangalore (India). Known in Kannada, the official state language of Karnataka, as ‘Dodda Aalada Mara’ that means ‘Big Banyan Tree’, this huge tree, an example of Ficus benghalensis which is about 400 years old, covers about three acres. It is located about 17 and a half miles west by southwest of the Bangalore Club in central Bangalore.

It is a popular local attraction for picnickers. This being the case and also the fact that I had never been there helped my in-laws decide that we should enjoy a picnic at the Big Banyan Tree. After thermos flasks had been filled, masala omelette sandwiches prepared, blankets packed, puri aloo packaged, bhakri boxed up in cylindrical steel containers with tight fitting lids, we set off: my parents in law, my brother in law and his family, my wife and our very young daughter, and me.

We arrived at the tree, which looked more like a dense, tangled forest than a single tree, but that is what banyan trees become when left to their own devices. After threading our way through the aerial roots hanging down from the tree, we found a small open space that looked nice for a picnic. At least everybody except me, not a lover of picnics, thought so.

We laid out the blanket, and put out the containers of food, and that is about as far our picnic was to resemble a normal meal ‘al fresco’. Moments after setting out the food, swarms of our closely related primates appeared. These monkeys had not come to keep us company or simply to watch their two-legged relatives eating. No, they had arrived to be fed. Their only intentions were far from friendly. They had come to steal our picnic. One by one they dropped out of the trees and approached our food. With great difficulty we were able to ‘shoo’ away these almost fearless raiders. At one stage, I resorted to throwing wet used teabags at them. They were very persistent, in fact so persistent that we decided not to persist with our picnic. We packed everything and made a hasty departure having eaten nothing.

This experience did nothing to remove my long-held prejudice against picnicking. It did the opposite. Wasps and other intruders are bad enough, but monkeys ‘took the biscuit’. Well, metaphorically if not in fact.