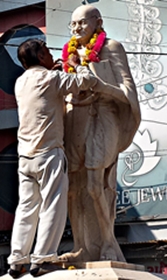 IN THE CURRENT CORONAVIRUS OUTBREAK, infection is spread from person to person in close contact with one another. Isolation and quarantine are likely to be effective in eventually reducing the rate of infection.

At the end of the 19th century and beginning of the 20th, another deadly pandemic, the bubonic plague, spread around the world. It was then believed that separating people from each other was likely to help arrest the plague. It was not because bubonic plague is rarely contagious, but usually transmitted by a vector.

While researching the life of my great grandfather, Franz Ginsberg, sometime Mayor of King Williams Town and later a South African Senator, I needed to explore the history of bubonic plague in South Africa. While doing so, I discovered that the young Indian lawyer, Mahatma Gandhi, also entered the story. The following is extracted from my article that was published in a South African medical journal back in 2008:

When the Boer forces, provoked by the British, started invading the Cape Colony in 1899, another invasion, covert in nature, was also beginning to threaten the area. The hidden enemy, a bacterium, lives in the blood of fleas and the rats (and other rodents) whose blood they ingest. These fleas are also partial to feeding off the blood of humans. When an infected flea feeds off the blood of a susceptible human, that person runs the risk of developing an often fatal illness known as ‘bubonic plague’. When my great-grandfather Councillor Franz Ginsberg (1862-1933) was serving on the Borough Council of King William’s Town in 1899, little was known about the transmission of the plague, even in the scientific world, except that its causativeagent was the bacterium Yersinia pestis (Y.pestis). This ‘bug’ is named after one of its discoverers Alexandre Yersin (1863-1943).

Today, much is known about the mechanism of transmission of Y. pestis. Bubonic plague is an example of a zoonosis: a disease that normally exists in other animals, but also infects humans. The danger to humans is that the bacterium is carried in the blood of certain kinds of rat, and that these rats often live in close proximity to humans. The rats serve as a mobile reservoir for this pest, but they are susceptible to its ill-effects. When a flea bites an infected rat, it ingests the blood of the rat and some of the bacteria living in it and the bacteria multiply within the flea’s digestive tract, causing considerable harm to the flea itself. If this same flea should bite a human, the human victim will receive some of the bacteria from the flea because the flea, while feeding, regurgitates some of its Yersinia-infected stomach contents into its human victim, who may then begin to exhibit the symptoms of bubonic plague. The plague can produce numbers of victims in epidemic or pandemic proportions. The Black Death, also known as ‘The Second Pandemic’, killed between one third and one half of the population of Europe and Asia between 1347 and 1351. It is thought by some to have been a pandemic of (bacterial) bubonic plague but others feel that it was a viral infection. The ‘Third Pandemic’ began in China’s Yunnan Province in 1855, and is known to have been caused by Y.pestis. Its dissemination around the world in the decades that followed was facilitated by global shipping. Rats and their fleas were frequent stowaways on ships, and as infected rats moved from port to port so did the bubonic plague.

In September 1896, the bubonic plague reached India (most probably from Hong Kong) and had claimed its first of many victims in the port of Bombay. News of the plague spread faster that the plague itself. In 1896, the Natal Medical Council discussed the bubonic plague – by then well-established in India – and its relevance to Natal. The Council decided that the whole of India should be regarded as an infected area, and that all ships entering the ports on the coast of Natal should be quarantined.

In January 1897, an anti-Indian demonstration was held in Durban to protest against the landing of ‘asiatics’ on board two Indian-owned ships which arrived there in mid-December 1896. The ships had been held in quarantine for 25 days. A group of Indians in Durban, including Mohanlal K Gandhi (later to be known as ‘Mahatma Gandhi’) who had just arrived in Durban on one of these two ships, the ‘Courland’, sent a long ‘memorial’ protesting against this to the Secretary of State for the Colonies in London. Its authors shrewdly noted:

‘…that the quarantine was more a political move against the Indians than a safeguard against the introduction of the bubonic plague into the Colony’,

and they provided evidence that the measures taken to effect quarantine were done ineffectively and too late to have been of any practical use. Despite measures such as these, bubonic plague reached South Africa sometime between 1899 and 1901.

The Natal medical community had some grounds for its fears that the plague might arrive from India. At a meeting of the Borough Council of King William’s Town in February 1899,13 it was announced that the bubonic plague had arrived in Port Louis on the island of Mauritius (a place that ships sailing from India to South Africa may have visited occasionally), and the Council had received a letter from the Town Office of Port Elizabeth, asking for the support of King William’s Town in their request for the government to enforce quarantine regulations (the Transvaal and Orange Free State prohibited entry to Indians in early 1899).

My great-grandfather, Franz Ginsberg, moved that the Council of his town should cooperate with that of Port Elizabeth. Although fear of importing the dreaded plague was the cause of an anti-Indian demonstration in this port as early as about 1897, the disease only began to occur in the town in April 1901 –soon after its arrival in grand style in Cape Town in March 1900 (having possibly arrived on board a ship from plague infested Rosario in Argentina). As early as November 1900, a doctor in King William’s Town reported eight cases of bubonic plague amongst Africans, three of these leading to death. By early 1901, the inhabitants of King William’s Town had good reason to worry about the plague.