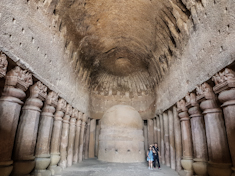 WE HAVE VISITED BUDDHIST cave temples carved out of the ‘living’ rock in the following places: Junagadh, Somnath, and Siyot (near Lakhpat in Kutch). A young Dutch tourist, whom we met at Dholavira, showed us his photos of some other spectacular Buddhist rock caves at Kanheri in the heart of the Sanjay Gandhi National Park, which is close to Borivali (about 32 kilometres north of Bombay Churchgate Station).

The 109 caves contain inscriptions dating from the 1st to 11th centuries AD. These help to age their construction. They are carved out of a basalt outcrop about 7 kilometres away from the Park’s main entrance.

We travelled to Borivali on a fast, limited stop train from Churchgate Station. It is lucky we bought first class tickets because the second class sections become very crowded at intermediate stations such as Bombay Central, Dadar, Bandra, and Andheri. We were glad that we had paid the extra fare because the train we took back Bombay was very crowded, but slightly less so in the first class.

A short autorickshaw drive brings one from Borivali station to the entrance of the national park. There, we were badgered by a young man who gave us incorrect and untruthful information about travelling the seven kilometres up the hillside to the caves. He suggested it would be best to hire a car for 1500 Rupees. Otherwise, we would have to wait for two hours before a public bus departed. He was fibbing. In fact, there is a very regular bus, which we boarded, that covers the distance for 10 Rupees per head.

The Kanheri Caves are a paradise for lovers of antiquities and the antics of wild monkeys. There are 109 manmade caves carved out of the rock, but only three of them are visually interesting. Cave number 3 is the most impressive. A ‘vestibule’ flanked by two massive sculptures (standing Buddhas), many times the height of an average human being, contains many other beautifully carved figurative sculptures. The vestibule lead into a huge manmade cave that in many ways resembles a vast romanesque basilica. The walls of this voluminous chamber have pillars carved from the rock as well as other sculptures depicting animals and deities. The pillars line the sides of a central space that resembles the nave of a church. The wall at the far end of this room is curved like the apse of a church. A large cylindrical stone object, of religious significance, sits in the ‘apse’. There is a curved passageway separating this cylindrical stone from the curved wall of the ‘apse’. Compared with other Buddhist cave temples I have seen, this particular cave beats them all in terms of size and beauty.

I clambered up the hillside to see some of the other temples. I saw about ten of them, but none contained any carvings that I could see. Many of them looked manmade and most of them provided shady places for visitors to sit, chat, and take selfies.

I do not know whether it is of any significance but I noticed that many of the caves are carved into the rocks that form a valley for a stream that still contains water. Maybe, the cave carvers chose to make their caves here because of the water supply provided by the stream.

On our way out of the cave area, we stopped to buy some books. This proved to be a lengthy business because it involved much paperwork that involved three officials.

The train journey back to Churchgate was uneventful once we were on board. Waiting for the train was unnecessarily exciting as the platforms at which trains were expected to arrive kept being changed.

Having visited the Kanheri Caves, I can recommend them highly to everyone visiting or living in Bombay (except those who cannot manage stairs).