WE LIVE IN A SMALL flat without neither garden nor a balcony, but near the centre of London and two large parks. For several years, we used to drive to France, where we hired country houses in rural locations from an organisation called Gîtes de France. A ‘gîte’ is essentially a furnished house available for rent to holidaymakers.

The organisation used to issue handbooks listing the houses available in various regions. Each home is given a category between the lowest 1 and the highest 3 ‘épi(s)’ (ears of corn). When we planned our trips, we used to choose from the houses on offer in the 3 épis grade. We had several criteria that determined our choice of holiday home. First, it had to have at least 100 square metres of usable space because we wanted to experience living in a spacious place for at least one week per year. Second, it had to be equipped with machines both for both clothes and for dishes.  In addition to fulfilling these requirements, there was one more thing we always wanted: a barbecue.

My wife had hired gîtes before we married, which is why we considered doing this for our family holidays. The first one we hired was in a small village, Poilly-sur-Serein near the famous wine-producing town of Chablis in Burgundy. The building was easily large enough to house my wife, her parents, who had flown over from India, our daughter, and me. We used the barbecue almost every evening, preparing vegetarian kebabs for my in-laws and meaty ones for the rest of us. Staying in Poilly-sur-Serein whet my appetite for trying other gîtes.

One April, we hired a lovely house in the south of Provence, not far from Orange. It was next to a cherry orchard and had a large garden. We could not use the garden much during the day because that year there was a heatwave in the south of France. Temperatures were hovering around 37 degrees Celsius and the best place to be was in our air-conditioned car, in which we explored the local and not so local sights.

One of our favourite hires was also in the south of France, in the Aveyron region. The house was located inside the walls of the ruined Templar’s castle at St Jean d’Alcas, which is but a few miles south of Roquefort-sur-Souzon, the centre of Roquefort cheese-making.   We visited the small town of blue cheese fame several times and ate some meals in its restaurants. At one of these, a cheese trolley bearing thirteen different types of Roquefort was wheeled to our table. Although they looked alike, our waiter patiently explained the characteristics of each before advising us that it was best not to select more than four of them on a plate at any one meal. At another eatery in the town, I could not resist sampling the ‘Menu Roquefort’, a three-course lunch consisting of dishes that included the town’s famous blue cheese. My starter was an omelette which incorporated the cheese. This was followed by meat in a sauce based on Roquefort. The dessert was a Roquefort soufflé. Although this might sound heavy, it was not because whoever prepared it was a good cook with a light touch.

The gîte at St Jean d’Alcas was so lovely that we hired it a second time, a year after our first visit. During the second stay, there was a grand celebration in the tiny village. It was probably Bastille Day. Long tables were set out in the lane running alongside our house. In the evening, we were invited to feast with the locals, who had flocked in great numbers to the usually deserted village. We joined the friendly crowd seated at the tables and were offered one of two main courses. On offer from huge cooking vessels, there was either tripe in a delicious sauce or grilled local sausages. It was a fine occasion with unlimited wine. The following morning, the tables and benches had disappeared, and the picturesque village had returned to its normal sleepy state.

There was only one shop in St Jean d’Alcas and its merchandise was limited in range but delicious. It sold bottles of a liqueur like ratafia, but with a different name. Apart from that, we had to buy our food supplies elsewhere, mainly in street markets and supermarkets. Shopping for daily needs was one of the many attractions of having our own home away from home.

One curious feature common to all the gîtes that we hired was that each of them had only one toilet/bathroom however large the building. In 2000, we hired a large house in the Haute Loire at a tiny village with a ruined castle, Arlempdes. Its location next to the castle walls was wonderful. It overlooked a sharp curve in the river. This four-storey building had accommodation for eleven people, but only one toilet and shower. Both were inconveniently located in the basement of the gîte. Had there been eleven of us, or even just five of us, having only one toilet would have been extremely inconvenient. As we were looking for extra space to enjoy, this property more than fulfilled our requirements.

We gave up driving through France several years ago. Most of the places we wanted to visit were more than a full day’s tiring drive across France. On the way out, this did not matter as we had an exciting holiday to enjoy. But the return journey was never much fun. There was the long drive through France towards the English Channel, much of which involved driving through the often-dreary areas of the northern part of the country. Then, there was a shorter but much more exhausting ‘schlep’ through Kent and south-east and central London … and the prospect of returning to work. By the time we reached our tiny flat, we were ready for another holiday. 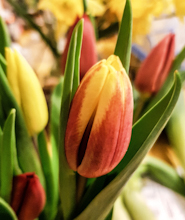 When I was a young child, probably less than ten years old, we made one of our regular family holidays to Holland. My parents, having studied Afrikaans to varying degrees of competence, felt easier visiting a country like Holland where the native language, Dutch, was not too exotic for someone to comprehend with a knowledge of Afrikaans.

One Saturday afternoon, my parents decided to take us to see the tulips at Keukenhof gardens. I cannot recall anything about the flowers.

However, I do not think I will ever forget the car park at Keukenhof. We had parked our car early in the afternoon when the parking area was fairly empty. When we came to leave, the car park was very full.

Everyone wanted to leave at the same time. A disorderly tsunami of vehicles converged on the exit gates. Nobody seemed to be regulating the traffic. It took us well over an hour to escape from the motorised mayhem.

Sadly, I associate Keukenhof with traffic rather than tulips, and although I love tulips, seeing them often brings Keukenhof to mind. 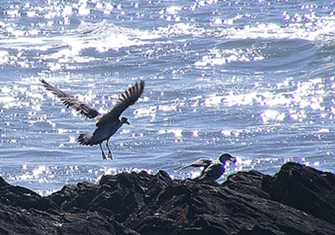 There was a young receptionist at one of the dental surgeries where I once worked. Let us call her ‘M’. Engaging her in conversation was not easy, but I tried often and succeeded occasionally.

Once, M announced that she was taking a week’s holiday. When she returned, I asked her:

“How was your holiday?”

“I just got a last minute package trip and got in the ‘plane,” she told me.

“If you don’t know where you went, what was it like?” I asked.

“Not very exciting, really. All of the beaches were covered with black rocks and stones.”

I guessed that M had probably been to one of the volcanic islands in the Atlantic. It surprised me that someone could take a flight somewhere and have no idea where she had landed. What if something awful had happened to her? Who would have known where she was?