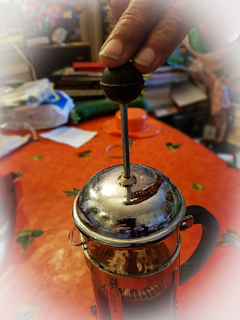 The cafetière (or ‘French press’ or ‘coffee plunger’) has been around for 90 years. It was first invented in 1929. It achieved popularity in England much later. I remember my mother bought one in the 1960s. It was then a ‘trendy’ way of making coffee. My mother used this device to make coffee for some time until one evening something awful happened.

Her brother-in-law, my uncle, was preparing coffee in a cafetière one evening, when suddenly the plunger, which usually needs some pressure to force down the coffee beneath the filter, suddenly shot downwards very quickly. As it did so, boiling hot coffee shot up and burnt my uncle’s hand and arm extremely badly. After this unfortunate accident, my mother, who was a very cautious and safety-conscious person, abandoned using her prized plunger, and reverted to making coffee through conical filter papers.

Although my mother would never use a cafetière again, I continued to do so. Many years after her premature death, I had a strange experience whilst plunging the coffee after feeding dinner to some guests. My wife had filled the cafetière vessel and had left the coffee to ‘infuse’. It was my job to take the plunge so to speak. I pressed down the plunger cautiously. It was harder than usual to press it. The plunger descended a little, but when I removed my hand it began rising. I pushed it again, getting it down a little further, but again the plunger rose up towards its staring position. I kept repeating the procedure, and each time the plunger rose a little. Eventually, I managed to get the plunger to remain near the base of the coffee container, and I poured out the coffee into cups.

I was mystified by our plunger’s abnormal behaviour.

After the guests had left, I opened up the cafetière to clean it. Beneath the plunger amongst the compressed coffee grounds, I disovered the reason for the odd phenomenon. Hidden amongst the dregs of the coffee there was a stainless steel tea spoon. Its previously straight stem had been gradually bent into a U-shape whilst I was trying to press down the plunger. What amazed me when I thought about it afterwards was that it was lucky that the glass vessel was tough enough to withstand the pressure exerted by the spoon on the glass while I was inadvertantly bending it.