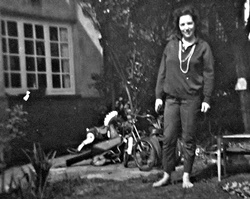 I HAVE ONLY VISITED CRETE once, and that was in the late 1960s with my parents and sister. We were based in Heraklion and made excursions from there around central Crete, visiting sites including Knossos, Matala, the windmills of Lasithi, Malia, Aghios Nikolaos, and Phaistos. This piece concerns three memories of my late mother on that visit.

The first recollection is of the rather non-descript but very comfortable hotel where we stayed in Heraklion. It had its own swimming pool. My mother, who could not swim, and was always a bad sailor, could not bear to look at the pool; it made her feel seasick seeing its water.

The next memory is of a hot day somewhere in the Cretan countryside. We were all thirsty and ready for a drink. We passed a house with a garden. Some people were sitting at a table sipping the tiny cups of coffee that Greeks favour. They were drinking what many people call ‘Turkish Coffee’, which many Greeks prefer to call ‘Greek Coffee’ or even ‘Byzantine Coffee’.

My mother walked up to the gate leading into the garden and using one of the few words of Greek that she knew, called out:

Kafenion (καφενεῖον) is the Greek word for ‘café’. Another Greek word she knew well was ‘siga’ (σιγά), which means ‘slowly’. She used it almost in every car that we were being driven in Greece. She was terrified that others driving her would have an accident because as a child in South Africa she had been involved in a dreadful car crash.

Getting back to my story, the coffee drinkers invited us into the garden and asked us to join them. My mother was mildly embarrassed to discover that this was a private house, not a ‘kafenion’. Soon, we were all supplied with Turkish Coffee. One of our hosts spoke rudimentary English. He had been a sailor when younger and excitedly told us that he had been to ‘Kong Kong’, in his own words.

Then, my mother noticed a single brightly coloured flower in the hedge surrounding the garden. She pointed at it, exclaiming “oreia” (ωραία), the Greek word for ‘lovely’. Our hosts burst out laughing. They found my mother’s reaction to the flower hilarious. One of them took Mummy to the flower and showed her it was artificial, attached to the hedge with a fine wire.

The third thing I recall about our Cretan odyssey relates to a commodity that was in great demand recently here in the UK: toilet paper. When we used to visit Greece in the 1960s and 1970s, there were usually people sitting at the entrances to public toilets. These folk, often elderly women, were there to sell sheets of toilet paper to people about to make use of the facilities.

We were in one small Cretan village when my mother needed to answer Nature’s call. We found a public convenience. An elderly toilet paper vendor was sitting by its entrance. My mother rummaged in her handbag for small change. While she was doing this, the lady asked my mother:

The lady handed her some toilet paper and would not accept the customary two Drachma payment.

We were in Crete at least twenty years after the German occupation of the island had ended in spring 1945. The Germans had perpetrated many horrific deeds on the Cretan population. The woman outside the toilet was certainly old enough to have had strong memories of that ghastly time. Had my mother been German, she would have had to pay for the toilet paper. Being British, she was like the great writer Patrick Leigh Fermor (1915-2011) who fought the Germans in occupied Crete, a representative of  a nation which helped rid the island of its unwelcome occupiers. This toilet attendant’s small act of kindness towards my mother helped drive home how awful it was to have been occupied by the Germans during WW2.

4 thoughts on “The importance of being British”