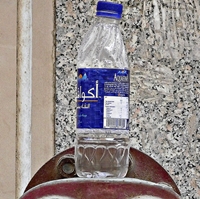 In 1967, there was a serious strike of dock workers in the United Kingdom. There were anxieties about shortages of stocks of various household goods. And one of the most worried people was my late mother. Maybe, having lived through the lean days of early post-WW2 Britain, she did not want her family to be caught short of any essential supplies.

Very soon, she filled one of our smaller bedrooms with enough toilet rolls to keep an army happy. We did not have to buy toilet paper for many years after the strike was over.

Some years after she died, my father and I looked into a large cupboard which was used mainly to store unwanted furniture and other junk. We hardly ever opened this storage area because we knew there was little inside it that we might ever want to see again. However, when we opened the cupboard sometime in the 1980s, my father and I found that its floor was packed solid with a layer of tins of canned meat: ham and so on. Sadly, this went to waste.

My mother worried that in addition to shortages of groceries, the strike might lead to a failure of the public water supply. To prepare for this possible tragedy, my mother bought bottled water. Today, water packaged in plastic bottles is extremely common,and many will not leave home without a bottle of water. However, in the late 1960s in the UK, bottled water was a bit of a rarity. In those days, it was de rigeur to drink only bottled water in France, but in the UK you just turned on the tap.

Given the scarcity of bottled water in the UK of 1967, it is amazing that my mother was able to find quite a few gallons of the stuff. What amazes me to this day is that all of the bottles bore labels indicating that they contained spring water bottled in Bulgaria.